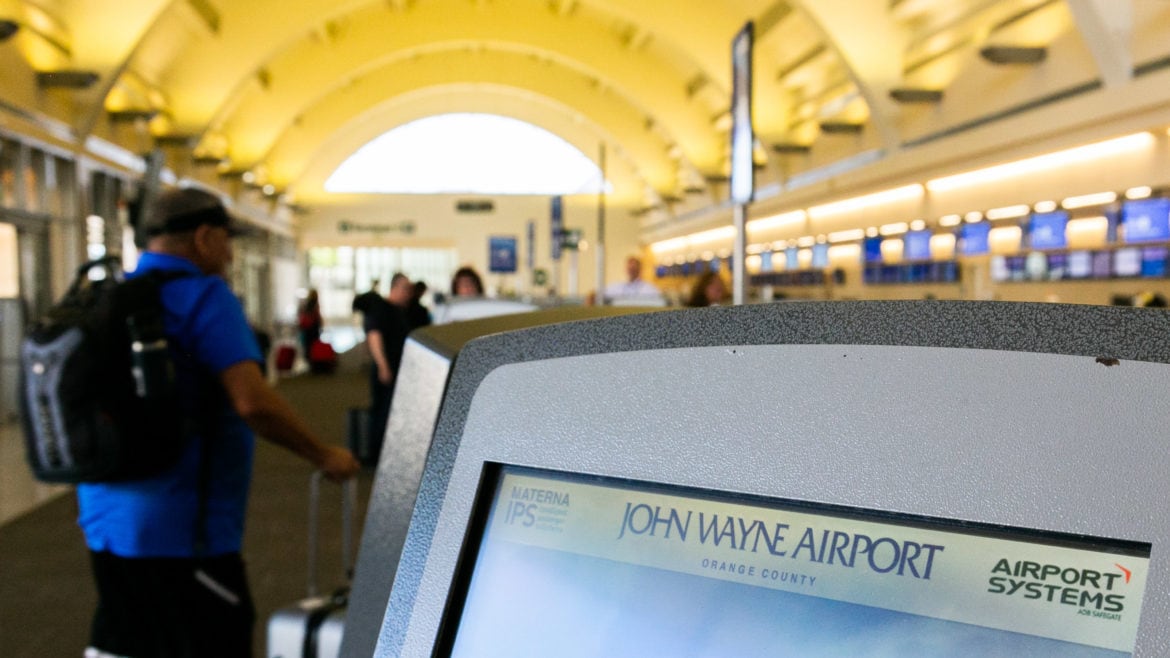 Despite a raging international debate about renaming John Wayne Airport, back home, it seems as if Orange County supervisors have effectively killed off any further discussion of the idea.

So it looks like John Wayne’s name is staying on the local airport, bordering Santa Ana, Irvine and Newport Beach, the city Wayne called home, at least until November.

Going into Tuesday’s public county supervisors’ meeting, it looks as if there’s no official appetite to put the renaming issue up for a formal discussion, much less a vote, given that the public agendas out as of Friday afternoon had no supervisor requesting any discussion about the name on JWA.

As I predicted in an earlier column, there’s tons of pressure on County Supervisor Doug Chaffee – the panels’ lone Democrat – to ask for a vote on the issue.

Yet it looks as if he isn’t engaging, at least not yet.

While the rules of the board of supervisors allow any supervisor to put an item on the agenda, Chaffee – who didn’t answer a request for comment for this column – seems to have skipped that option.

None of the Republicans on the board of supervisors seem have any appetite for a name change.

On Friday, the University of Southern California announced that it would be removing a Wayne exhibit at the school.

And today, there’s a protest scheduled just across the street from the airport at 2:30 p.m. on the corner of Michelson and MacArthur in Irvine around the issue.

The debate over renaming Orange County’s municipal airport comes amidst a raging national discussion centered around race in America, one that really took off with the recent George Floyd protests and then focused on removing Confederate memorials across the South.

In the midst of this national debate, a community Op-ed in the Voice of OC earlier this month, published by Chapman University Professors Fred Smoller and Mike Moodian, argued it’s time to remove the name John Wayne off the local airport.

The professors called out a series of bigoted and racially charged statements Wayne made in a 1971 interview with Playboy Magazine as the main reason for a switch.

“We can’t all of a sudden get down on our knees and turn everything over to the leadership of the blacks. I believe in white supremacy until the blacks are educated to a point of responsibility,” Wayne said in the 1971 interview.

“I don’t feel guilty about the fact that five or 10 generations ago these people were slaves.”

While columnists like the LA Times Michael Hiltzik and OC Register’s David Whiting had raised the issue in the past, this year the debate really took off after the professors added their voice, with even President Donald Trump joining the fray.

Once she read their editorial, Orange County Democratic Party Chairwoman Ada Briceño co-authored a resolution with the two professors – who conduct an annual opinion survey for the university each year – calling on county supervisors to remove the name, especially in light of the attention to bigoted comments that Wayne made back in 1971 and never walked away from publicly.

Wayne’s son has defended his father saying his views changed over time.

Yet Briceño insists that John Wayne’s image needs to go.

“We’ve been dealing with a racist Orange County for a long time,” said Briceño. “There are millions that come into the Orange County every year through the airport and we are greeted by a white supremicist. That’s not acceptable.”

“We believe the right way of dealing with this is to have the board of supervisors vote to change the name,” she said, adding that she had sent a letter to supervisors.

Orange County’s Republican Party leadership also chimed in on the debate once it took off, issuing a statement that condemned what Wayne was quoted as saying but warned county supervisors against engaging on the issue, which the party labeled as a Democratic Party attempt to engage in culture wars.

“We can remember the good things that John Wayne did for this nation and Orange County,” read the OC GOP statement by Chairman Fred Whitaker. “We can and do condemn what he said in that 1971 magazine interview. So, we can also learn from his imperfections. Just like we’ve learned from and about the flaws of many leaders like JFK, FDR, and so on. Iconography is about enshrining the larger ideals of good from their lives, not the flaws. Those goals are best served by keeping our history in front of us, not by destroying it to serve the radicalism and frenzy of the present moment. We owe that, at the very least, to the Americans who will come long after we are gone.

The Supervisors should reject these sideshow calls for removal of John Wayne’s legacy at the Airport, and instead move on with the business of leading us to a more perfect union within in our county.”

That direction seems to have stuck.

That means the pressure now is really on Chaffee.

Chaffee has been asked by Democratic leaders to get a discussion of the topic onto the public agenda.

Privately, sources indicate he’s telling people he can’t do that but will mention the issue during his board comments.

The board rules clearly state that any supervisor can put an item on an agenda by noon on Wednesday. And once on that agenda, according to Rule 22, no other supervisor can take it off.

Chaffee didn’t respond to a text I sent him earlier this week on the issue.

Other supervisors privately confirm there is no appetite on the board of supervisors to debate this issue.

“No issue since the (county) bankruptcy in (19)94 has received as much attention as this,” Smoller told me.

“We at least deserve a public hearing on a really important issue and they’re not willing to doing it,” he said.

“I’m not advocating to get rid of all his honors, his star in Hollywood…I’m saying today, is it appropriate given how diverse our community is to have someone who represents one point of view…today, we are very different.”

Republican leaders in their statement took note of Wayne as a remarkable member of the community and deserving of the honor bestowed in 1979, and criticized what they called the Democratic approach of fueling culture wars to win elections.

“In the latest episode of declaring war upon our past, and always willing to cast the first stone, the Democratic Party of Orange County wishes to add John Wayne to the list of unacceptable heretics,” Whitaker’s statement read.

Yet Smoller said it’s the Republicans who took the first shot in that culture war.

“It is clearly a culture war,” Smoller said. “Those views are the views of a bigot.”

“They chose a 9-foot, bronze statue of a white guy to let people know who’s in charge. That’s who they chose,” Smoller said.

Yet the dominance of that brand, if you look at the demographic and voting data, is over, Smoller said.

Yet even senior Democrats seem shy to join the fray.

“No one will call me back,” Smoller added noting that Congressman Harley Rouda and State Senator Tom Umberg had issued statements but not congressional leaders like Katie Porter or Mike Levin, who are facing re-election.

Given all the sensitivity around the issue, I figured local politicians would simply kick the issue to the November ballot – offering all their partisans plenty of easy tackling fuel to go after each other during the Summer and into the Fall.

But maybe this one’s just too hot to touch during an already hot summer.