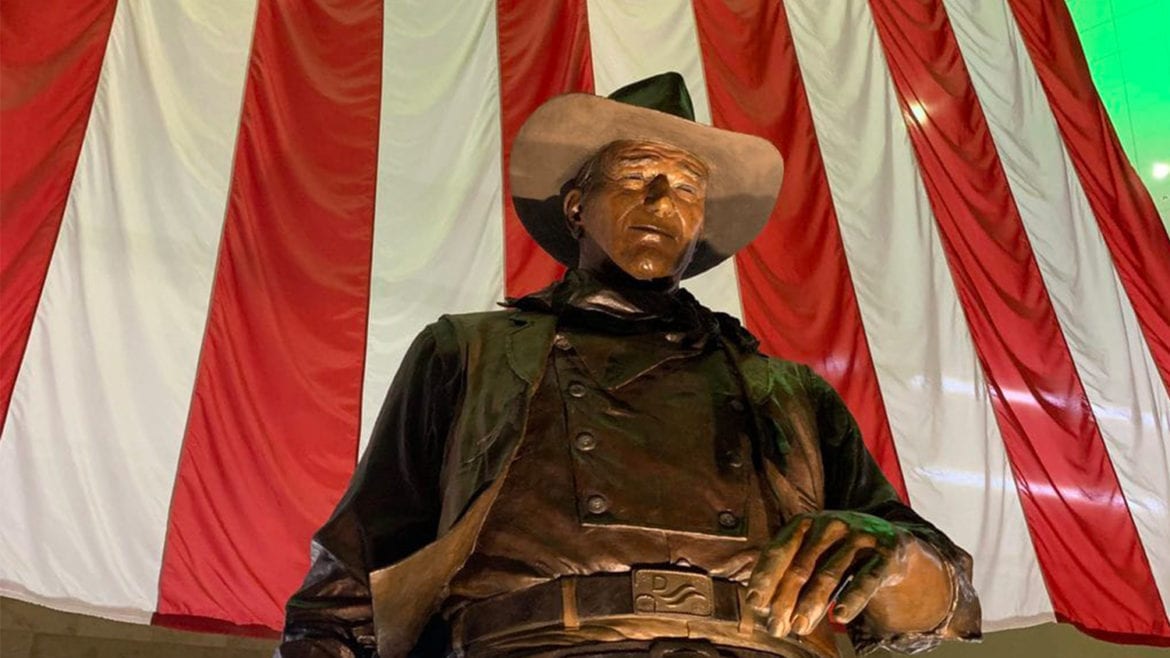 As Confederate statues and odes to Christopher Columbus are taken down across the country, Orange County must come to grips with its own tribute to a racially polarizing figure: John Wayne. The time has come to rename our airport and remove Wayne’s statue.

The Duke does not represent who we are or who we wish to be. With each passing year, the name and statue become increasingly anachronistic.

Ask yourself: If we named the airport today, is this the symbol we’d pick to represent our diverse, cosmopolitan community?

In 1979, the Orange County Board of Supervisors renamed the Orange County Airport after John Wayne, who died that year. A nine-foot bronze statue of the actor in his cowboy costume—with a wide brimmed Stetson, neckerchief, and pistol (in an airport!)—was installed in the main terminal in 1982.

The swaggering actor represented Orange County’s rural origins and conservative ideology. Like Wayne, many people came to the county from the Midwest and from modest financial backgrounds. Through hard work, grit, and determination (and huge federal contracts), they built successful companies and political careers.

By 1979, the county’s rural past was long gone. Shopping malls, tract houses, and freeways replaced orange groves, packing houses, and two-lane roads. Nevertheless, Wayne’s rugged individualist image and hard-right opinions were appealing to OC’s business-casual dressed “cowboy capitalists.” The statue was also a potent symbol of who was in charge.

Since 1979, however, sweeping changes took place in the county. The population has shot up 67 percent. Most important, Orange County has become increasingly diverse. In 1979 more than 78 percent of the county was Anglo; today, we are a “majority-minority” county. Non-Hispanic Whites make up slightly less than 40 percent of the population.

Surveys we conducted in recent years reveal a county that has become more politically moderate. In 2016, for the first time in 80 years, the county voted for a Democrat for president, and voters will do so again in November. Today Democrats have a 39,000 voter registration edge over Republicans, and there are no Republicans in the House of Representatives from Orange County.

Additionally, according to our most recent Orange County Annual Survey results, 79 percent of county residents see the county’s increasing ethnic diversity as a source of great strength. A strong majority across all party lines agree with this sentiment. Orange County today is much different from the county that embraced the John Birch Society and Save our State (Proposition 187) and once endured private security guards at polling places in an effort to deter Latinos from voting.

The most significant reason to rename the airport is that Duke was a bigot. Wayne’s white supremacist—and anti-gay and anti-Native American—views came to light again when a 1971 interview he did with Playboy magazine went viral in early 2019. Wayne’s racist comments prompted newspaper columnists Michael Hiltzik (Los Angeles Times) and David Whiting (Orange County Register) to call for Wayne’s image to be removed from the airport. Whiting cited Wayne’s quotes in the Playboy interview:

“We can’t all of a sudden get down on our knees and turn everything over to the leadership of the blacks. I believe in white supremacy until the blacks are educated to a point of responsibility.”

“I don’t feel guilty about the fact that five or 10 generations ago these people were slaves.”

“Now, I’m not condoning slavery. It’s just a fact of life, like the kid who gets infantile paralysis and has to wear braces so he can’t play football with the rest of us.”

But that was before the murder of George Floyd and the ensuing—and long overdue—national reckoning on civil rights.

As stated earlier, memorials to white supremacy are being taken down across the globe. Confederate statues have been toppled in the South, and NASCAR banned the display of the Confederate flag. The state of Mississippi is being urged to remove the “stars and bars” from its state flag, and the Pentagon is seriously considering changing the names of military bases named after avowed racists.

HBO has stricken Gone with the Wind from its online catalog due to its racist stereotypes and glorification of slavery. NFL Commissioner Roger Goodell said he was wrong when he condemned quarterback Colin Kaepernick for taking a knee during the playing of the national anthem to draw attention to police brutality and racism.

Racist branding—such as Aunt Jemima, Uncle Ben’s, and Mrs. Butterworth’s—is ending. The breakfast restaurant Sambo’s is being renamed by its contrite owner who said, “So today we stand in solidarity with those seeking change and doing our part as best we can.”

Orange County needs to do its part to heal the nation, too. We need to consider the importance of being on the right side of history.

John Wayne in no way represents Orange County today and its thriving communities of color. His name and image should certainly not be part of people’s first and last impressions when they fly into and out of our innovative region. The Board of Supervisors should change the airport’s name to Orange County Airport and they should remove Wayne’s statue—a monument to white supremacy—from the main terminal, a prominent place and a focal point of our community.

After Wayne’s 1971 interview went viral last year, a citizen started an online petition calling for the removal of Wayne’s name and statue from the airport. If you agree, you can sign the petition here.

Fred Smoller is an associate professor of political science at Chapman University, where he has been on the faculty since 1983. He received his Ph.D. from Indiana University. His major areas of interest are American politics, with an emphasis on local government and public administration. Smoller directs Chapman’s annual local government conference and is the author of the 2018 book From Kleptocracy to Democracy: How Citizens Can Take Back Local Government. Contact Smoller at [email protected].

Michael A. (Mike) Moodian teaches for Chapman University’s leadership studies program and is an associate professor of social science at Chapman-affiliated Brandman University. He is the editor of the textbook Contemporary Leadership and Intercultural Competence (Sage, 2008). Moodian is the former chairman of the World Affairs Council of Orange County. His website is www.moodian.com, and you can contact him at [email protected].