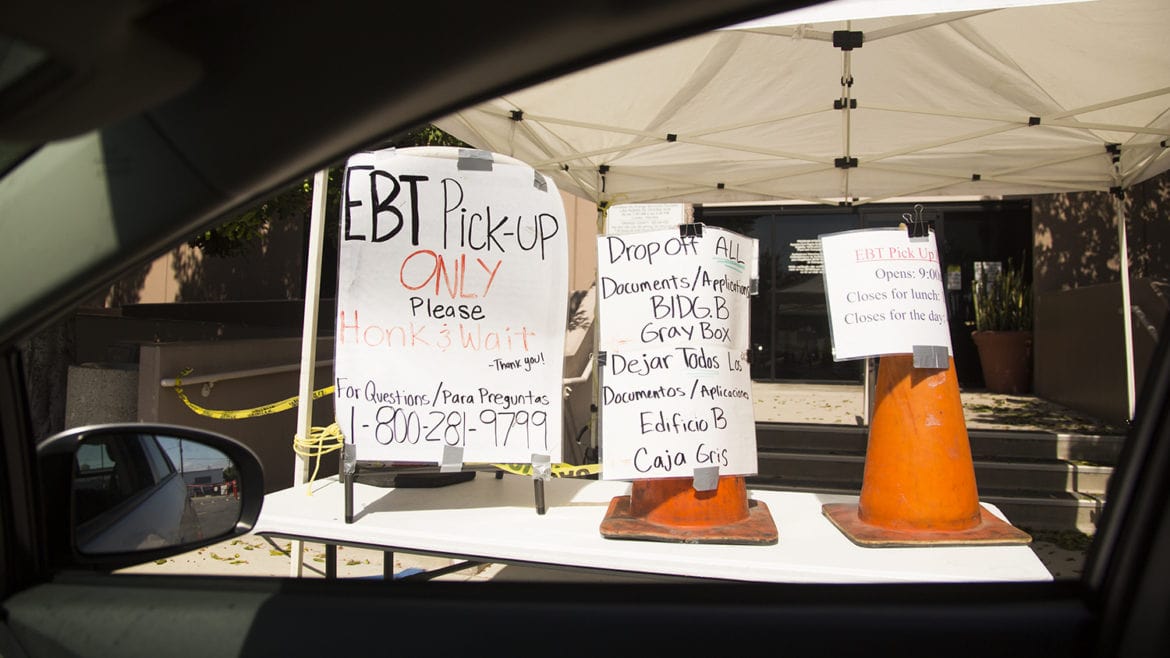 A viewpoint from inside a car passing through the Social Services Agency drive-thru on June 16, 2020 in Santa Ana.

Orange County’s Social Services Agency is facing a budget shortfall that could mean an end to food stamps if county officials can’t fill the gap, just as the coronavirus pandemic’s economic fall out pushes residents’ welfare needs to historic levels.

“So now our new unfunded is approximately $35 million, or four percent of our overall budget.”  SSA Director Debra Baetz said in a videotaped July 16 internal digital town hall for employees, reviewed by Voice of OC.

The agency is responsible for administering food stamps, welfare and helping get residents health insurance — which is all funded through a combination of local, state and federal funds.

Yet sales tax revenues for local governments – the local part of that funding mix – is now seriously dipping.

The spike in demand for services alongside shrinking sales tax revenues is creating a gap.

“It’s a gap we’re concerned about. So the biggest unknown at this point is the county’s ability to help us offset this gap and we won’t know that some time late summer, late August, in preparation of the September budget going to the board.

One of the biggest hurdles the agency is facing is the county’s ability to fund 15 percent of the food stamp program because OC is facing a steep drop in sales tax revenue. The county government is dealing with a projected $458 million deficit.

“Some allocations, like Medi-Cal, is 100-percent state and federal (funding). There is no county share to those allocations, that’s good news,” Baetz said at a videotaped June 25 digital town hall, also reviewed by Voice of OC.

“But when we look at other programs such as CalFresh (food stamps), you’ll see there’s a county share component to that. And what that means is when you look at every dollar we spend at CalFresh, the county is required to put in 15 cents, then we get 35 percent from the state and 50 percent from the federal government,” Baetz told workers.

She said the agency could lose up to $92 million for food stamps if the county can’t put up its end of the funding.

“If the county is unable to put in the 15 cents, then we also lose the 35 cents and the 50 cents,” Baetz said. “We’re anticipating it would cost the county $14 million to be able to draw down, in this example, $78 million in CalFresh funding. Without putting in the $14 million, you don’t get the $78 million,” Baetz said.

“The information contained in the reporter’s media inquiry was extracted from an internal presentation to SSA staff, based on the May Revise budget numbers. The FY 2020-21 Budget snapshot was based on a point in time. The numbers identified in the inquiry were estimates and not reflective of the current situation,” county spokeswoman Molly Nichelson said in a Thursday text message.

She said county CEO Frank Kim has been working with the agency to reduce the shortfalls to minimize the upcoming budget’s negative impact to services.

“SSA has submitted a proposed FY 2020-21 Budget to CEO for Board approval requesting general fund support to cover budget shortfalls. CEO (Frank Kim) has worked diligently with SSA to reduce the upcoming budget shortfalls based on new information, such as updated realignment figures as well as changes within the State adopted budget. CEO is working with SSA to ensure that resources are available to maximize allocations and minimize any impact on services,” Nichelson wrote.

The Board of Supervisors is set to vote on budget adjustments next month.

Meanwhile, unemployment was 13.7 percent in June, according to the latest analysis by the state Employment Development Department.

Baetz previously told Voice of OC the top demand from residents are food stamps and the need during the pandemic hit different than the Great Recession.

“The increase is more drastic with this pandemic. Everything shut down all at once and there was an upfront demand for needs,” Baetz said in a phone interview in June. “I think I see it as more of a dramatic increase in need due to the pace of the closures.”

The unemployment rate is higher than the 10 percent rate during the height of the pandemic, according to the U.S. Bureau of Labor Statistics.

Much of the agency’s budget for the social welfare programs is funded through a combination of sales taxes, vehicle registration fees and other fees — often referred to as realignment funds by bureaucrats.

“It is the one area where we’re most concerned and the reason that is — is it accounts for 30 percent of our revenue source,” Baetz said in June 25 town hall. “It’s driven and funded completely by sales tax and license fees and with COVID and shutting down the economy, both of those sources are anticipated steep declines.”

Anaheim is facing an estimated $75 million shortfall, especially since tourism is dead while its Disneyland-resort area is largely shut down during the pandemic, including its convention center.

Westminster is facing a possible bankruptcy in a couple of years after the City Council decided against letting city voters decide to keep the additional one-percent sales tax. It’s also wrestling with a $17 million shortfall this year.

And Costa Mesa is facing a $30 million budget deficit.

Even in normal times, Baetz said the welfare programs spending already outpaced the budget during her presentation to workers.

“Over time what we’ve seen is that these programs have grown well beyond the revenue,” Baetz said. “So the expenditures are outpacing the revenue and that’s on a good day. You throw an economic challenging time such as COVID and the shutting down of our economy, what you start to see is now there’s gaps in available funding for these programs. This is why it’s so concerning.”

Meanwhile, the Social Services Agency is trying to cut its spending by offering early retirement programs for employees.

“The county’s budget situation, as you all know, you received the notice from human resources about the voluntary incentive program, that includes voluntary separation as well as some retirement incentive associated with medical health insurance,” Baetz said in the July 17 townhall.

Some Social Services Agency employees have already taken early retirements including the division director of assistance programs, according to emails obtained by Voice of OC.

The voluntary separation and early retirement program is structured in tiers, according to the emails.

“The point of a furlough is having unpaid hours,” Baetz said in the July 16 digital town hall. “In 2008, it was an 80 hour furlough period, so we lost two weeks of pay that fiscal year. At the time in 2008, we had the option of just taking two weeks without pay or doing it one day per pay period.”

The agency has instituted a hiring freeze, which could mean less staff in the near future. The positions of people who retire early or voluntarily resign might not be filled for at least a year, or the positions might be eliminated.

“The freeze is going to continue for a very long time. If you read the [early retirement] policy very carefully, you would see that those positions that are vacated are not able to be filled for up to 12 months. And in some cases the position number would be deleted. So this is the county’s way of trying to reduce some costs.”