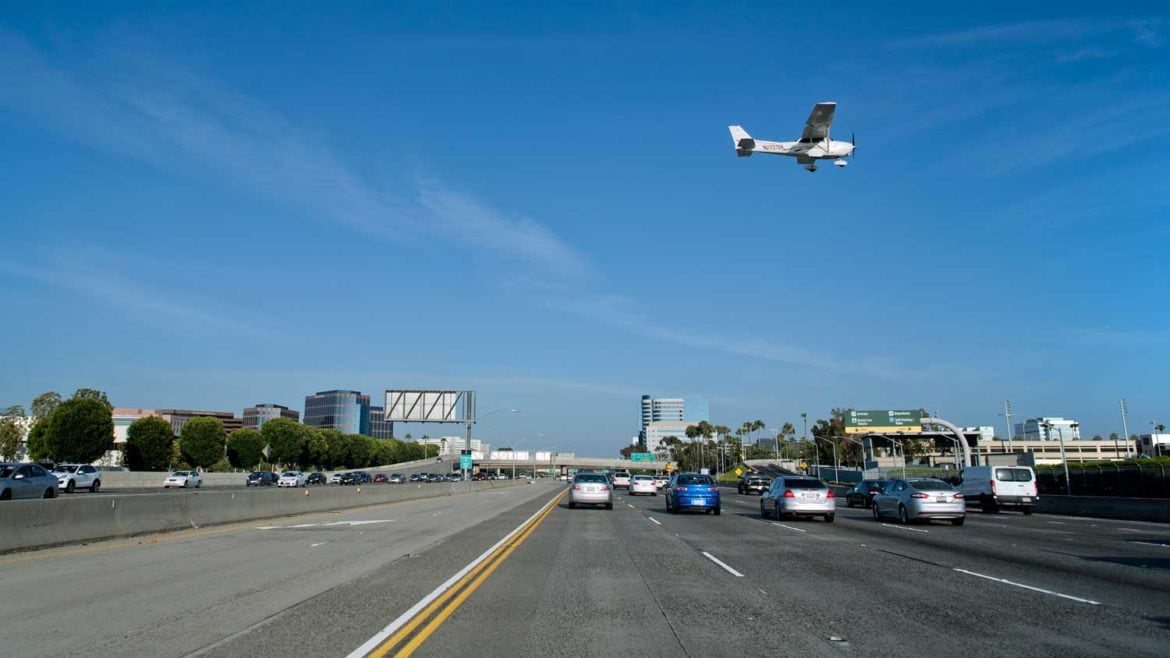 A small plane passes over the 405 Freeway in Santa Ana as it approaches for a landing at John Wayne Airport in June 2017.

Orange County supervisors are moving forward with three companies to take over non-airline aviation services at John Wayne Airport, while public concern lingers over a potential expansion of the airport’s private jet presence.

The decision falls in line with recommendations from county airport commissioners and Newport Beach city officials leading up to Tuesday’s county Board of Supervisors’ meeting.

Though Newport Beach officials and activists also wanted supervisors on Tuesday to approve conditions that any final lease contract — which still has to be worked out and approved at a later date — would ban commercial, hop-on jet services from the facilities and reinforce supervisors’ promises to maintain the same mix of small and large jet space at the airport, among other asks.

The board opted not to include those final lease conditions in its vote, despite an initial suggestion by Supervisor Michelle Steel.

The requests for the conditions were read aloud at the meeting by Newport Beach City Council members Jeff Herdman and Diane Dixon, the latter of whom just weeks ago praised county supervisors for working with her city on the issue.

Newport officials and activists also wanted conditions baked into the eventual final lease agreement prohibiting the construction of a new facility to process international travelers and limit the companies’ hours of operation servicing aircraft flying in and out of the airport.

Still, in a phone interview after the meeting, Dixon said she wasn’t troubled by supervisors’ refusal to act on the conditions right away.

“Discussing and debating each of those points … to do it at the dais gets a little messy,” Dixon said, adding she’s confident each of those points will be pursued during the closed-door negotiations between the county and the companies. “I have that assurance from the supervisors.”

Other observers of the airport saga like Sue Dvorak, of Newport Beach, seemed less convinced after the meeting.

“The board could have made a good faith statement to assure the community that their concerns over increased general aviation jet traffic would be a priority during lease negotiations, but they chose instead to not address the community’s concerns, citing the confidential nature of the process,” said Dvorak, who’s a member of the Citizens Against Airport Noise & Pollution and AirFair. The two groups are opposed to expansion of the airport.

Over the years, neighboring residents have voiced increasing concern over the growing number of large private jets parking at John Wayne and they fear the airport may be pushing out smaller “mom-and-pop” planes and courting more international clientele and jets that aren’t based there.

In addition, airport expansion foes fear the facility’s greater appeal for corporate jet owners will mean an increase in noise and air pollution for nearby communities.

Steel’s suggestion to incorporate the conditions requests got pushback from supervisors Lisa Bartlett and Andrew Do, who argued it would exceed the sensitive legal parameters of the contract negotiations between county lawyers and the selected companies.

“I really appreciate the concerns of the community at large relative to the leases, but I think we’re going to have a closed session discussion … so I’m personally not comfortable today with throwing a lot of things into the leases, because I think it’s premature,” Bartlett said.

Do agreed, saying “county counsel also has an important role in the negotiation as well. Because we do have parameters — legal parameters and regulatory parameters that we have to operate under.”

“So, I don’t think this is the right time for the board to engage in that conversation. It’s probably  better for the negotiations to take place under the guidance of county counsel and then brought back to the board, whether in closed session and open session, for us to discuss. I think that’s probably the better way to go,” he added.

Steel, whose district is most impacted by what happens to the airport, responded: “That’s fine with me, then.”

Before that, supervisors also disagreed over which companies should get the contracts.

Supervisors Don Wagner and Doug Chaffee both voted “No” on moving forward with ACI and Clay Lacy, instead advocating for Atlantic Aviation, which scored highest with county staff in the bidding process to provide general aviation services in the northwest side of the airport.

Wagner argued Atlantic — which currently holds one of the operating leases and sought a renewal — had better standing in the general aviation industry, and that the turnover would result in lost jobs for Atlantic employees at the airport.

Supervisors like Bartlett countered that in the past, new aviation firms that took over the leases also took in employees from the outgoing companies.

Nearly 100 people turned up for the meeting to give public comment — many of them employees and executives at the aviation businesses vying for the contracts — and spoke in support of their firms.

Still, some members of the public like Newport Beach resident Mel Beale reiterated the community’s requests for supervisors to reaffirm their promise of preserving the same mix of smaller planes and large private jets. Led by Steel, the pledge was made after initial plans to push out smaller planes in favor of private jets were met with heavy public backlash.

While “very fine (companies) have been selected, we’re very supportive of that,” Beale said, “we’re very adamant we need to add terms to the long-term 35-year lease that is protective of that” promise to balance small and large jet space.

Gary Schank of the SoCal Pilots Association said “the question becomes, can the airport administrators go, ‘eh, supervisors schmupervisors — we’re gonna do what we want,’ or does the board have teeth? To that end, we’re asking (these conditions) be included in there.”

Dixon, the Newport Beach councilwoman, over the phone emphasized the process “isn’t over yet,” and that whatever lease agreement the county and the aviation companies negotiate will have to go back to the board in the public eye:

“We’re not done until we see the final lease agreement.”