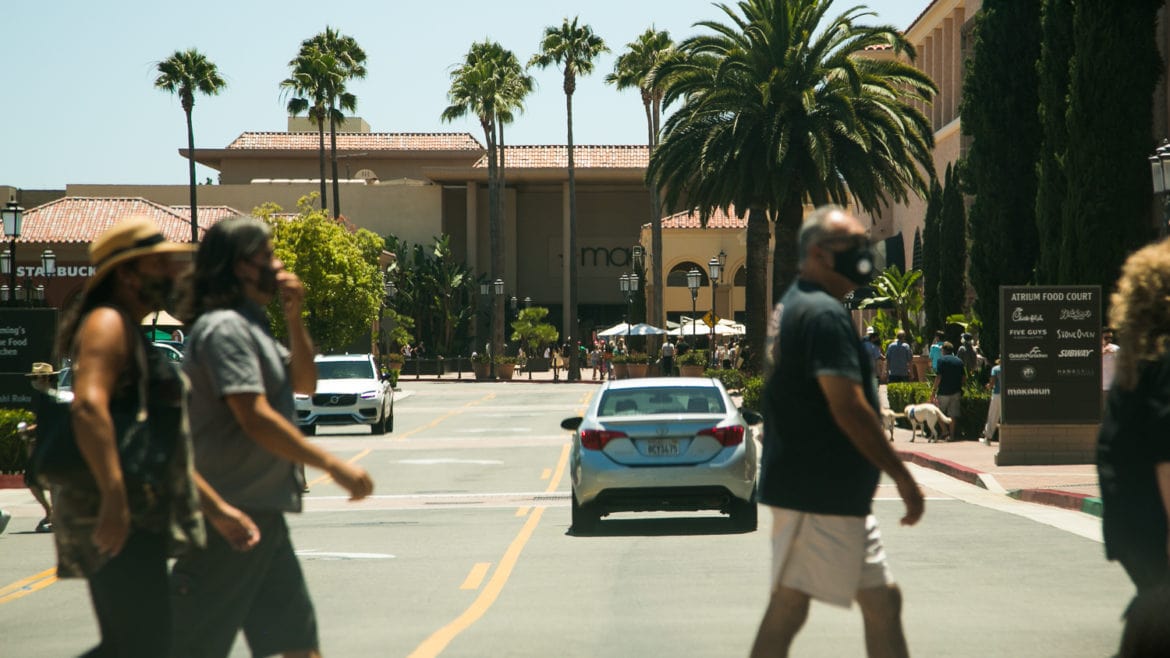 Orange County could move as early as tomorrow into the third tier of the state’s coronavirus guidelines, which means more businesses could reopen and some restrictions limiting the number of people indoors could be lifted.

Gov. Gavin Newsom said there’s signs the virus is beginning to spread faster after it showed a decrease statewide.

“If we’re not cautious, we’re not vigilant, we’re not wearing our masks … these numbers can start to tick back up,” Newsom said at a Monday news conference.

Malls and other retail stores won’t have to limit the number of people indoors if OC makes the move to the third tier, according to the guidelines.

The state’s new four-tiered coronavirus guidelines, released earlier this month, dictates which businesses can reopen and how many people will be allowed indoors in certain shops. OC started at Tier One, the purple tier, and moved to the red tier, Tier Two.

If OC moves into the third tier, bars could reopen, but would have to serve drinks outdoors. Bowling alleys would be allowed to reopen also.

More people would be allowed inside movie theaters, churches, gyms and restaurants under the Third Tier, also known as the orange tier.

Some bars around North County have already opened — operating both indoor and outdoor settings — for at least the past month, despite a mandated shut down under the guidelines.

County public health officials have taken a light-handed approach to coronavirus guideline enforcement, instead leaving the bulk of efforts to state strike teams, which are the alphabet soup of California regulatory agencies.

Some of the agencies in the strike teams include the Alcoholic Beverage Control, Occupational Safety and Health Administration, the Department of Business Oversight, the Department of Consumer Affairs and the California Highway Patrol.

Newsom pointed to various graphs at Monday’s news conference, including one that showed Orange, San Bernardino, San Diego and Riverside counties’ virus spread picking back up.

“While it’s true we have seen a threefold decrease since … our peak in early July, we have seen some signs those decreases are beginning to plateau, beginning to slow down,” Newsom said at a Monday news conference.

He also warned of the incoming flu season, which could also put a strain on hospitals when coupled with the pandemic.

Newsom, along with numerous public health experts, urged everyone to get a flu shot.

“You mitigate the impact of what some refer to as a twindemic. A potential second wave of COVID-19 transmission and the flu happening concurrently. Putting stress, putting pressure on our hospital system,” Newsom said.

Meanwhile, there’s a push to reopen Disneyland and many other businesses around OC as numerous classrooms are reopening their doors for the first time since March.

Dr. Dan Cooper, a top pediatrician at UC Irvine, said it’s important to get kids back into classrooms if it’s safe, which means schools need to have a solid testing and data collection plan so public health experts can pinpoint how the virus is transmitted in schools.

“We really need to look at what happens when the schools open and we really need to do focused studies. It’s not just collecting the number of positives. If there’s an outbreak you can get a hold of the virus and sequence the genome of the virus. And begin to make a geographical statement of where the virus came from,” Cooper said in a phone interview.

“Was it the one the kids had or a teacher that brought in from the community when he went out to the movie theaters?” he said. “It’s not the time, as they say, to take your foot off the brake — we still really need to pay attention.”

UCI epidemiologist Andrew Noymer, a top public health expert, said he won’t be seen at Disneyland if it reopens.

“You won’t find me personally at Disneyland or Knott’s Berry Farm,” Noymer said in a phone interview.

“I am a public health person — dyed in the wool — and I think there’s a lot of icebergs ahead. We do live in a democracy and people have a right to ask why are all these businesses closed. I’m not unsympathetic to the question, but for me personally, the answer is I’m not going.”

Newsom has repeatedly said he’ll release guidelines on theme park reopening soon, yet hasn’t given any specifics on what those plans could look like.

Noymer also warned of a potential second wave hitting in the fall.

“Can we keep the businesses closed? Not if the numbers keep improving, quite frankly,” he said. “But we need to monitor like crazy. Because we are heading into the fall and things could get worse again and I expect that they will get worse again — but nobody knows for sure.”

Since the pandemic began in March, the virus has killed 1,216 county residents out of 53,448 confirmed cases, according to the county Health Care Agency.

As of Monday, 161 people were hospitalized, including 46 in intensive care units.

“Our numbers continue to be good. So, we’re not quite at the place where it’s an automatic reopening. But we’re certainly getting there,” Cooper said.

Nearly 850,000 tests have been conducted throughout OC, which is home to roughly 3.2 million people.