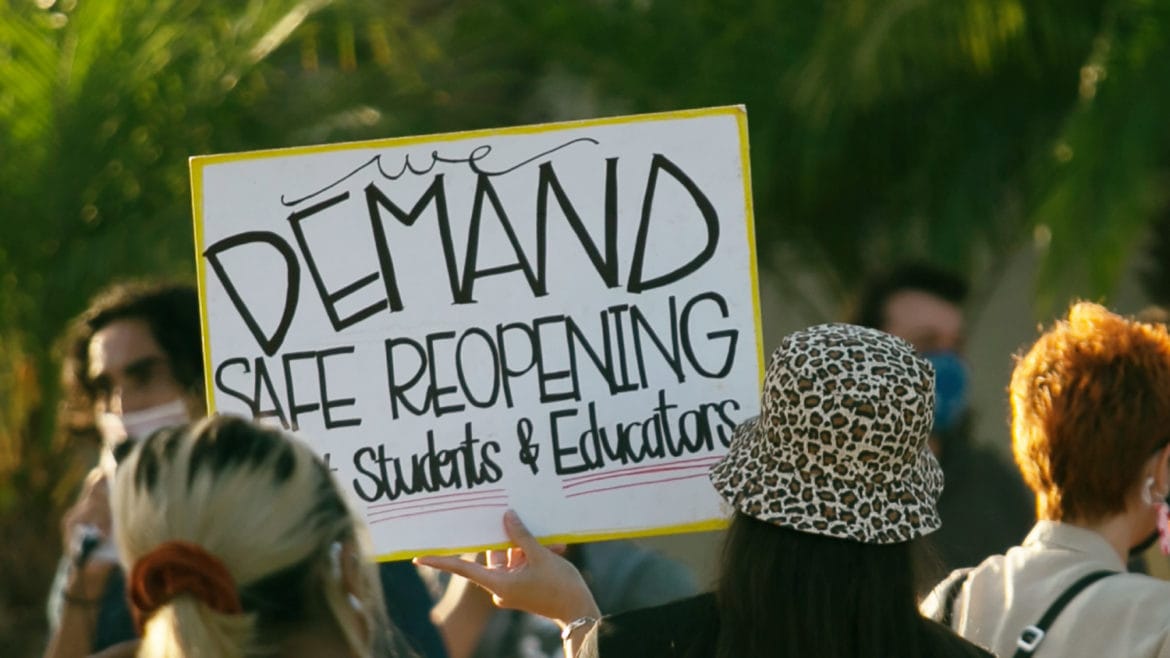 Orange County Health Care Agency officials won’t disclose coronavirus cases at schools and are instead leaving that decision up to school districts as many classrooms are slated to begin reopening.

“When they get to a point where they can confirm and decide what direction they can take, then it will be incumbent upon the schools and the Department of Education to communicate that,” said Dr. Margaret Bredehoft, the Deputy Director of Public Health for the agency, at a media briefing Thursday, which was not open to the public.

Meanwhile, concerns from teachers and parents are mounting — from decreased instruction time to fears of virus spikes — while some districts are seemingly ignoring the concerns.

Some teachers are mulling over a potential strike if districts keep moving to open classrooms without assuring them there are adequate safety measures.

Last night, a score of Capistrano Unified School District teachers raised their concerns around reopening schools at a district board meeting.

They echoed sentiments of teachers in other districts who said administrators haven’t listened to them when drawing up plans to reopen classrooms.

“It seems so odd that we are trusted experts when we are with students, but our judgment isn’t trusted when it comes to the district reopening plan. As the classroom experts, we see major holes in the plan and schedule that has been dictated,” said Joy Schnapper, president of the Capistrano Unified Education Association at Wednesday’s meeting.

“It is extremely dismissive when our professional opinions are blatantly ignored.”

Orange County residents are divided on the issue and not everyone is against reopening classrooms.

“Many students are suffering from depression and anxiety, isolation and a sense of hopelessness, and not knowing if and when we will be back at school,” said one senior at Dana Hills High School.

“One of my fellow classmates and friends passed away last month. I wonder if that student would be with us today, if we had been back in school.”

“The district and the board has been less than forthcoming about what those options actually entailed,” Vu-Conant said in a Thursday phone interview. “All they did was send out links.”

She and other parents initially thought the hybrid learning option was half classroom learning and half online instruction, she said.

Some educators and parents have expressed concerns to the Voice of OC about the inequities caused by distance learning and some students have fought depression after the pandemic shut down schools.

Some Saddleback Valley teachers were hoping the district would consider a postponement of reopening classrooms at a special meeting that took place today but to no avail.

District spokesman Mark Perez emailed residents about the meeting and stated only public comments on items on the agenda would be allowed because it’s a special meeting.

The biggest fear from various teachers and parents is the rush to bring students back to campus will cause a spike in cases.

Some teachers are specifically concerned with the lack of a testing program, enforcement of safety protocols, classroom sizes, ventilation and whether districts will be transparent in reporting virus cases on campuses to the public.

There’s also concerns that the plans are too vague.

Since the pandemic began in March, the virus has killed 1,182 county residents out of 52,622 confirmed cases, including six new deaths reported Thursday, according to the OC Health Care Agency.

Hospitalizations continue to decrease, with 168 people in hospitals, including 42 in intensive care units as of Thursday.

Nearly 820,000 tests have been conducted throughout the county, which is home to roughly 3.2 million people.

Many of the people at yesterday’s Capistrano Unified School District board meeting called out the Board President Jim Reardon for comments he made to the Voice of OC yesterday.

Reardon was asked about concerns from teachers who feel they’ve been left out of the conversation and if teachers had input in the plan.

He responded by saying teachers had extensive input in the plan and that the district met with union leadership over twenty times before saying:

“I hear teachers say we weren’t consulted, but that’s because they weren’t paying attention. I have very little sympathy for people who cry out at the last minute and that’s what’s going on here. They’re suddenly realizing that they’re actually going to have to go back to work after enjoying a very nice time being paid while at home since March.”

Teachers who spoke at the meeting took offense to his remarks.

“I spent 13 hours on Monday working for you. I spent 13 hours yesterday working for you, Mr. Reardon. The comments I saw you make implying that teachers are laying back and relaxing since March — I was so devastated by that man. I was seriously injured by your words and it reveals how you people are thinking about us and about school,” a Dana Hills High School teacher said.

“I’m working my tail off and so is every teacher I know.”

“If anybody was offended by that, I apologize,” Reardon said at the end of public comment about the quote.


Hosam Elattar is a Voice of OC Reporting Fellow. Contact him at [email protected] or on Twitter @ElattarHosam.