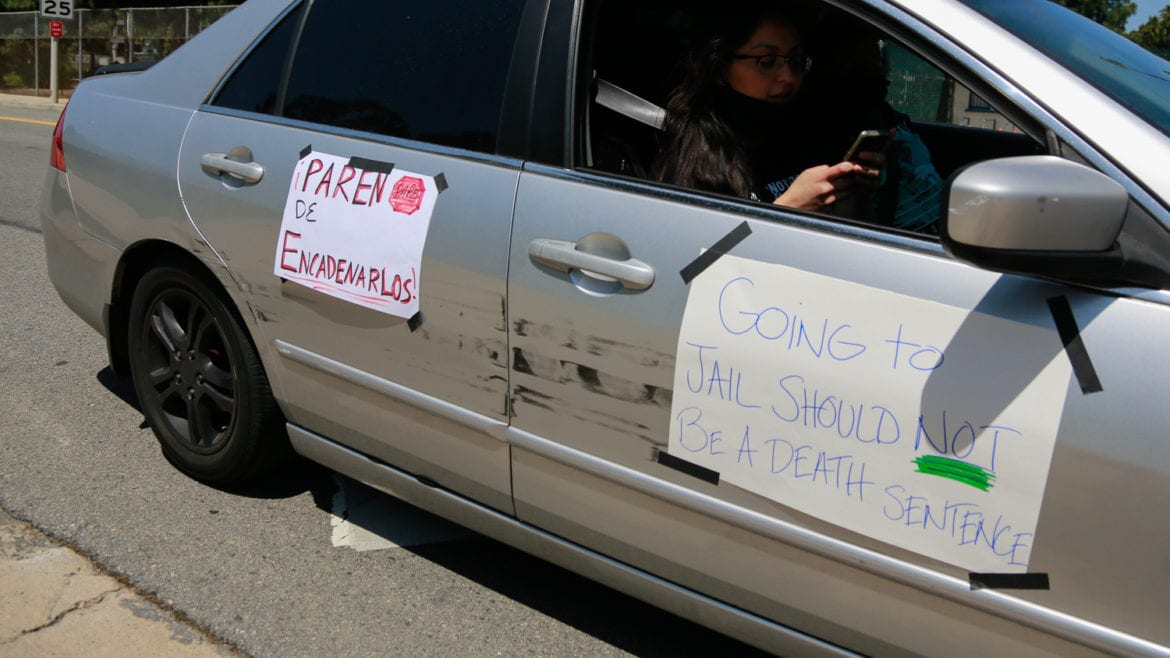 A car caravan protest in front of the OC Jail on April 14, 2020. Recent coronavirus infections in the jails have led community members to organize and demand for inmates to be released.

More people have died in Orange County Sheriff’s Department-run jails this year than in any of the last four years — and not from the coronavirus.

Annual in-custody deaths had been declining since 2016 and 2017 in which 11 people each died, respectively.

Twelve people have died in jails this year so far, according to the Sheriff’s Department.  The Orange County District Attorney’s Office is investigating the deaths. Some of the people who died were found unresponsive in their cells in the morning, while others died at local hospitals.

No inmate has died from the coronavirus, according to the Orange County Health Care Agency.

In-custody deaths in the county in 2020 are higher in comparison to some other neighboring counties as well, according to the most recent data released to the Voice of OC from various sheriff’s departments.

In San Diego County, there have been at least four in-custody deaths in 2020 thus far compared with 16 in 2019. San Diego County has a greater population with over 100,000 more residents than Orange County.

The OC Sheriff’s Department was criticized by the public for its track record of in-custody deaths last year after the deaths of Anthony Aceves, Eric Denton, and Shikiira Kelly in a two month span.

In 2019, activists raised concerns about the lack of information released on the cause and manner of those three deaths before the Orange County Board of Supervisors.

Jamiee Blashaw, a spokesperson for the sheriff’s department, said they put out as much information as they can after a death while an investigation is still ongoing.

Santa Ana police arrested Aceves, who was 37, on a felony probation charge in April last year. One month later, Aceves was found unresponsive in his bed at the Theo Lacy Facility in Orange before he was taken to a hospital and pronounced dead.

Alvarez said she would call the coroner’s office on the 23rd of each month to inquire about what happened to her son and request the autopsy report and after eight months was told her son had died of an accidental fentanyl overdose.

Such a report on Aceves, submitted to Sheriff Don Barnes by the District Attorney’s Office in April this year, suggested the fentanyl could have been ingested through a cookie and the report said security footage showed someone appeared to pass “something” under Aceves’ cell door the night before he died.

Alvarez is skeptical of the findings and said the report’s information on her son’s criminal history in the state included what she characterized as lies, like violations of spousal battery when Aceves was never married. She also has questions regarding how fentanyl even got into the jail in the first place.

“That’s just to show you how sloppy they are,” Alvarez said. “My son never did half the stuff on that thing.”

In 2018, the county grand jury found that jail staff failed to notice and document health issues, assigned people to cells with others who had contagious diseases, and pointed out other issues in dozens of deaths during incarceration.

“Over the last three years, 44% of custodial deaths in Orange County jails may have been preventable,” the grand jury wrote.

“Delays in treatment, failure to identify health threats at intake, failure to diagnose serious mental illness, and lack of timely referral to a healthcare professional have increased the chances that an inmate will not make it out alive. Modest changes in procedures at a relatively low cost could improve survival rates,” the panel said in its report.

Alvarez and her family have filed a civil lawsuit against the county in the death of her son. The District Attorney’s investigation concluded there was not enough evidence to show the Sheriff’s Department was culpable in Aceves’ death and closed its investigation.

“My son was schizophrenic. He needed help. He didn’t need to be in jail. He needed to be somewhere where they could help him,” Alvarez said. “Anthony was no throwaway, he was loved and he’s still continued to be loved. We’re still fighting for him.”

Hosam Elattar is a Voice of OC Reporting Fellow. Contact him [email protected] or on Twitter @ElattarHosam.