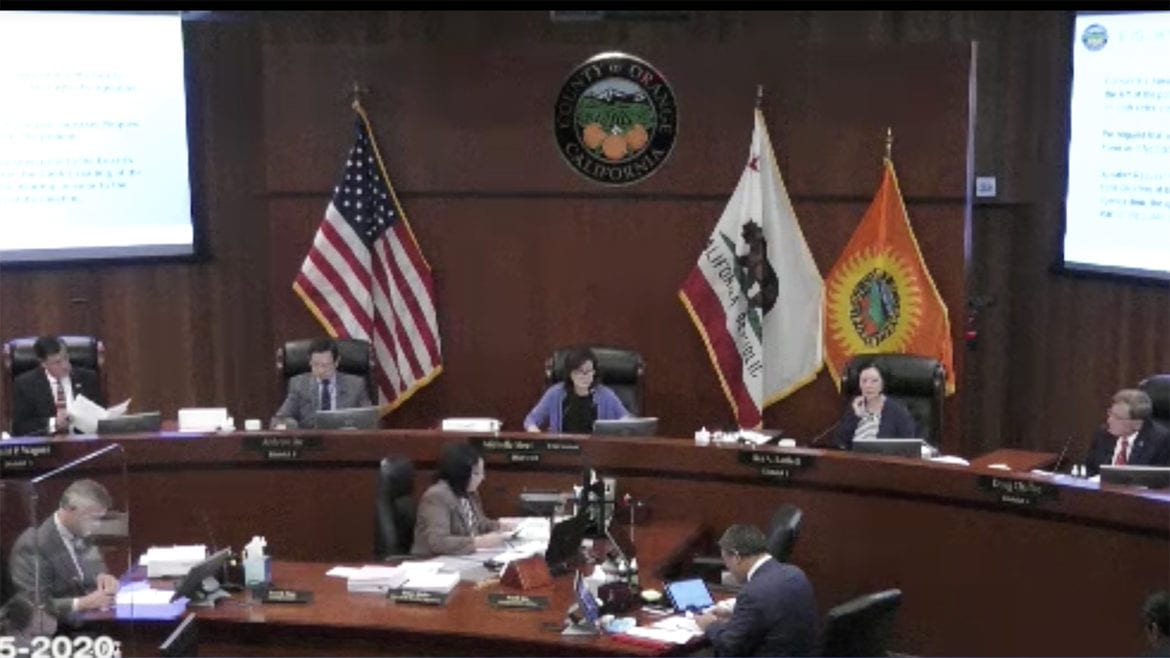 Orange County supervisors a their public meeting on Aug. 25, 2020.

Orange County officials are in negotiations to buy three motels and convert them into housing for homeless people with on-site support services, under a state program that could provide $60 million for the local purchases.

The plan stems from Project Roomkey, the program in which OC and other counties are sheltering hundreds of homeless people at rented motels to slow the spread of coronavirus in that population. In June, the California Legislature and Gov. Gavin Newsom included a total of $600 million in the new state budget for counties to buy properties for the housing effort.

Last week, Orange County supervisors unanimously authorized staff to start the purchasing process and open escrow on the three properties, and then return to the body for final approval of the sale, while keeping the locations secret for now.

“These properties have already been decided in the past and approved by cities in which they are located,” said Supervisor Andrew Do.

Do and the other supervisors didn’t say where the motels were, and county officials are declining to reveal their locations, pointing to ongoing negotiations. It’s a shift from their usual practice of publicly identifying properties they’re negotiating for, on the supervisors’ closed session agenda, before going into escrow.

The supervisors have each been separately briefed on where the motels are, though county officials say that info will not be released to the public until final purchase agreements are approved.

Homeless advocates and county officials have welcomed the infusion of funds as an opportunity to help end homelessness.

The goal, Do said, is to help homeless people transition “into something more permanent, and hopefully healthier. So that way we can reduce the risk of those individuals falling back into homelessness.”

The location of the properties “may be disclosed after the negotiations are completed or if required through the closed session process,” said Mechelle Haines, spokeswoman for the Orange County Community Resources, which oversees the county’s housing department.

California’s transparency laws require the county to disclose the location of properties under negotiation if they’re brought to county supervisors for a closed session discussion.

“When the negotiation is to be discussed in closed session, then the property address is provided in compliance with the Brown Act,” Haines said. “However, the locations associated with these negotiations have not been scheduled for closed session and have therefore not been disclosed.”

“The county is still in negotiations on the properties and will need final state approval on the applications and awards of funding as part of, and to complete, those negotiations,” Haines said.

County officials expect to find out by the end of September if the state has approved the funding.

While the cities have not been disclosed, county officials previously said their preference is to work with cities that support the motel-buying effort, and that they have backing from the leaders of at least three cities in Orange County.

At the supervisors’ meeting last week, Do and a county executive refuted public comments suggesting the motel purchases were part of an effort to force people without physical and mental health services into quarantine.

“They are voluntary,” said Dylan Wright, who is helping oversee the motel purchases as director of Orange County Community Resources.

“Do we just put people in supportive housing and then abandon them?” Do asked.

Wright said no. “The unique thing about supportive housing…is it comes with full wraparound services, so that there is full support of the individual living in the unit,” he added.

Orange County’s motel-buying efforts have been strongly backed by Supervisor Lisa Bartlett, who previously told Voice of OC she’s “thrilled” about the county applying for the $60 million.

“There will never be a cheaper time to buy these buildings,” said Brooke Weitzman, a leading lawyer for homeless people. “Now is the moment that Orange County needs to act if they’re looking for solutions.”

The county has been sheltering hundreds of homeless people through Project Roomkey at motels and hotels who were at higher risk of death from coronavirus because they’re over 65 years old, have underlying medical conditions that put them at greater risk, or have tested positive for coronavirus.

The county’s application marked a more proactive approach by county supervisors to applying for their fair share of grants for homeless services than in the past.

Last year, a federal judge publicly scolded Orange County officials for missing out on millions of state and federal taxpayer dollars to address growing homelessness by not being proactive enough in preparing for and seeking the funds.

At the time, U.S. District Judge David O. Carter noted other counties – similarly-sized San Diego County and San Mateo County, of which the latter is one-fourth the population of Orange County – applied for tens of millions of dollars more in grants than OC.

“San Diego [County] is at $125 million. We’re at $13 million,” Carter told a courtroom full of top county and city officials and members of the public, referring to applications in the preceding months for state mental health housing grants known as No Place Like Home.

Orange County has a budget of $31 million for its Whole Person Care program, while San Mateo County, which has four times fewer people than OC, plans on $165 million. Alameda County, which has about half the population of OC, received approval for $283 million.

“This county has walked away from hundreds of millions of dollars,” the judge told OC officials last year. “We’ve got plenty of money…are you willing to step up and start applying for federal and state monies?”

County officials didn’t have a timeline for finalizing the motel purchases, which they said depends on when the state gets back to them about funding approvals.

The locations are slated to be revealed publicly if and when the final steps of the sale come to supervisors for approval.