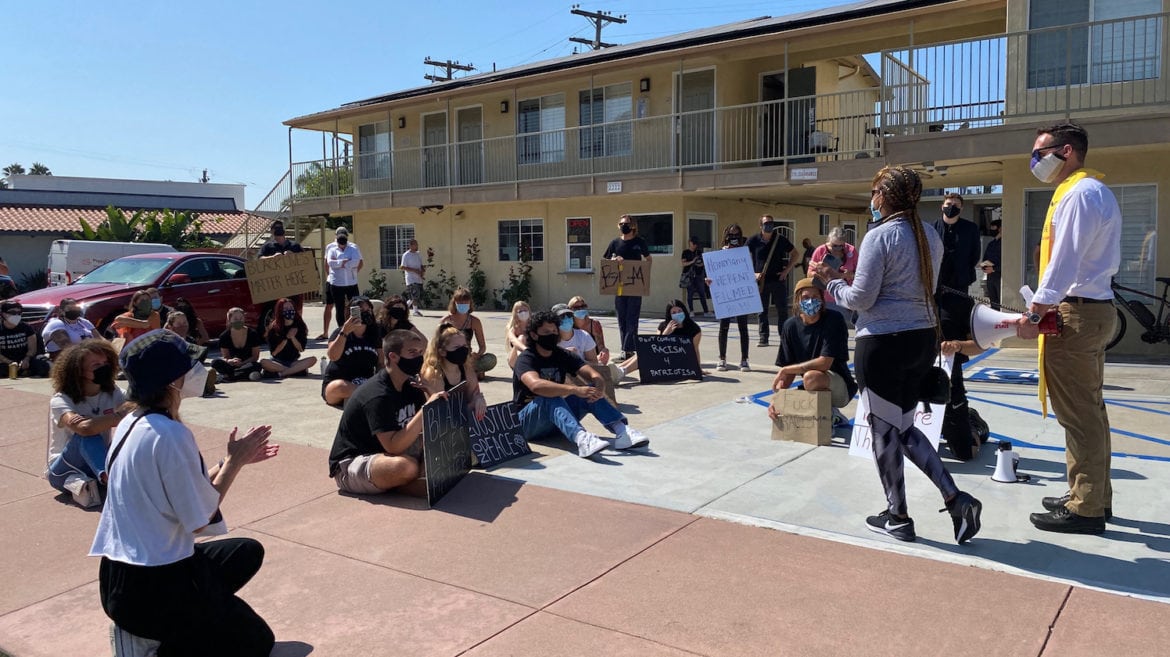 Protesters organize in San Clemente around 10 a.m. on Sept. 24, 2020, in response to an Orange County Sheriff's Deputy killing of a homeless Black man.

Protests and criticism have sprung up in San Clemente around the Wednesday killing of a homeless Black man by an Orange County Sheriff’s deputy.

Sheriff Don Barnes has called a news conference for 2 p.m in Santa Ana.

A demonstration against the department has already popped in the city. Plans for another this afternoon outside the Sheriff’s San Clemente station are underway.

The incident began when two Sheriff’s deputies part of the department’s Homeless Outreach Team “made contact” with the homeless man, later identified as 42-year-old Kurt Andras Reinhold, around 1 p.m. outside San Clemente’s Hotel Miramar on El Camino Real, according to a Sheriff statement posted to social media.

An altercation ensued, according to the department, which claims the man reached for a deputy’s gun and “shortly after, a deputy-involved shooting occurred. Deputies began lifesaving measures, and the subject was pronounced deceased at the scene.”

Video of the incident was posted to Twitter on Wednesday by Jackson Hinkle, a past San Clemente City Council candidate and prominent young activist in the city who wrote in the post:

“Clearly these officers lacked the ability to effectively respond to the needs of this homeless man. The man was trying to walk away, they wouldn’t let him. The officers escalated the situation by body slamming the man on the ground.”

A protest in San Clemente started outside Pipe’s Cafe at 10 a.m., with around 30 to 40 people attending with signs, wearing masks, and chanting things like “No Justice, No Peace,” at around 10:20.

Protesters on scene told Voice of OC that several arrests had been made.

OC Sheriff Sgt. Dennis Breckner confirmed to Voice of OC around 12:30 p.m. that arrests had been made, but did not comment on the charges or amount of protestors in custody.

It was the same day that grand jurors in Kentucky opted not to level direct charges on police officers who shot and killed Breonna Taylor, an emergency medical worker, in her own home on March 13 — a decision that sparked protests and unrest across the U.S.

Local activists like Zoe-Raven Wianecki, a Black organizer who helped rally protests in Orange County earlier this summer in response to the Minneapolis police killing of George Floyd in May, are now planning for protests on Thursday afternoon outside the Sheriff’s San Clemente station.

She said the event calls for a reckoning of the department and the way deputies handle people of color and, namely, homeless people: “The way we over police houselessness needs to stop.”

The Sheriff’s Dept. in the statement referred to “surveillance video” that it claims shows Reinhold reaching for a deputy’s gun.

Department spokeswoman Carrie Braun on Thursday said the surveillance video is part of an investigation that the Orange County District Attorney’s office — headed by DA Todd Spitzer — is conducting.

“The decision to release that video is not solely up to OCSD due to the ongoing investigation at the DA’s office,” Braun said.

Voice of OC has submitted a request for the surveillance video under Assembly Bill 748, a records disclosure law around police officer audio and video recordings.

Sheriff Don Barnes is expected to speak to reporters at 2 p.m., three hours before organizers are scheduled to rally outside the department’s San Clemente station.

“We are very well aware of the national climate of police community relations and are doing everything we can to provide honest and transparent information about what we know to be true about this incident but also be cautious to not provide information we don’t know to be true,” Braun said.

Haley Slovenec is a Voice of OC youth media contributor.