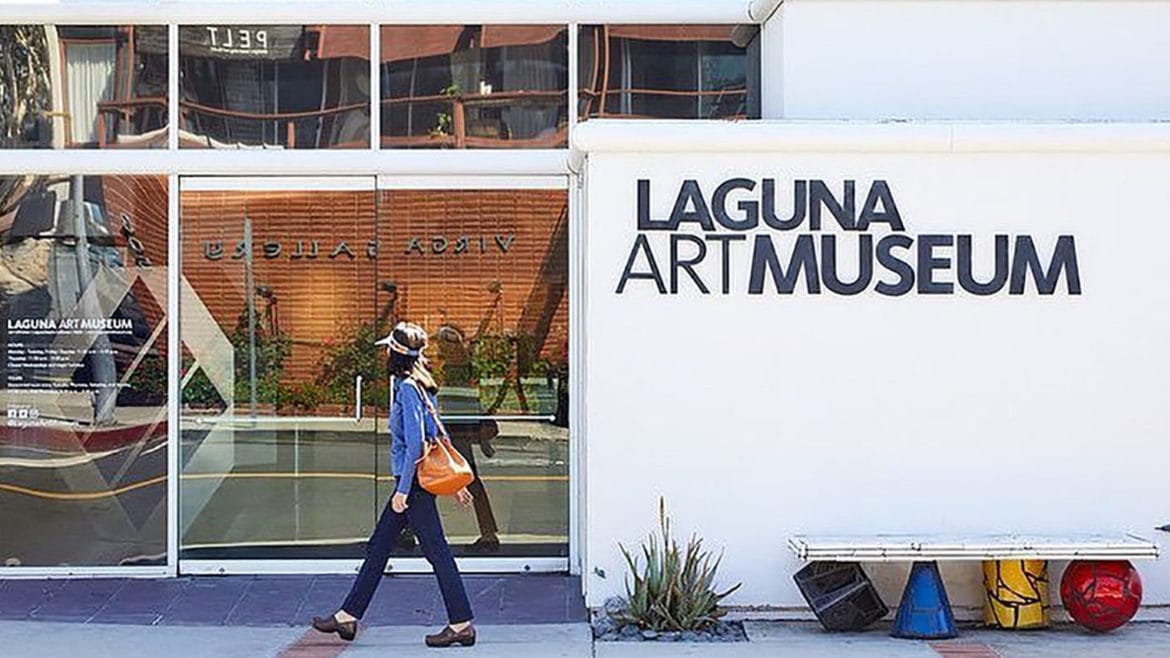 An exterior view of Laguna Art Museum in Laguna Beach. The museum reopened on Sept. 10.

When the Bowers Museum shut down in mid-March due to the coronavirus pandemic, it had one of its most popular exhibitions in decades on view. The opening gala for “Inside the Walt Disney Archives: 50 Years of Preserving the Magic” essentially sold out, and attendance during the first two weeks of the exhibition was robust.

Then COVID-19 forced museums across the state and country to close. The shutdown cost the museum about a quarter of a million dollars per month, according to President Peter Keller.

Now, the Bowers is open again, under the guidelines set forth by Gov. Gavin Newsom and the state’s “Blueprint for a Safer Economy.” Since Orange County is now in Tier Two, or the red tier, museums are allowed to operate at 25% capacity. That could expand to 50% as soon as Sept. 29, when Orange County is expected to qualify for shifting into Tier Three, or the “orange tier,” which represents moderate coronavirus prevalence.

Like other museums and art institutions in Orange County, the Bowers opened up on or around Sept. 12, and a substantial queue of visitors formed outside the museum, lining the sidewalk that runs along Main Street in Santa Ana. 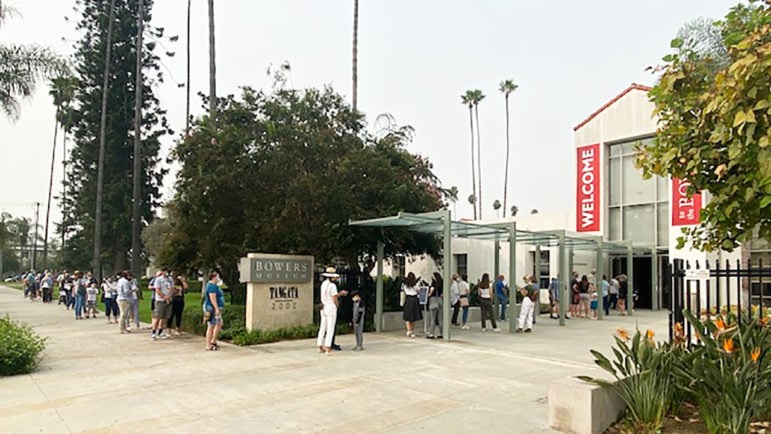 Visitors lined up outside the Bowers Museum on Sept. 12, the first day it reopened to the public after a long coronavirus-induced hiatus.

Inside the museum, safety guidelines were in place: Masks were required for all visitors and staff; temperature checks were conducted at the entrance; hand sanitizers were placed throughout the galleries and interstitial spaces; signs indicated appropriate social distancing; drinking fountains were closed; and increased cleaning protocols were established.

Since its reopening, the Bowers has been averaging 150 people per weekday, and 300 per day on weekends, according to Kelly Bishop, director of communications and branding at the Bowers.

“Our attendance numbers are building weekly and we expect them to continue to build as people share their positive experiences about the precautions we’re taking and as we’re allowed more capacity (50%) in the new tier next week (fingers crossed),” Bishop said in an email.

After a long hiatus, museums — and many art galleries and visual art institutions — are back in business in Orange County. Laguna Art Museum reopened on Sept. 10, and has extended its exhibition, “Granville Redmond: The Eloquent Palette,” through Nov. 15. Advanced tickets for timed entry are required, as are face masks. Physical distancing is encouraged, and the museum is sticking with 25% capacity, until the state allows for more visitors.

The Orange County Museum of Art, currently housed in its OCMAExpand facility in Santa Ana, reopened on Sept. 12. Masks are required for visitors and staff, Plexiglas has been installed at the entrance desk, and hand sanitizing stations are available throughout the galleries. Signs and distance markers remind visitors to keep at least six feet away from each other. 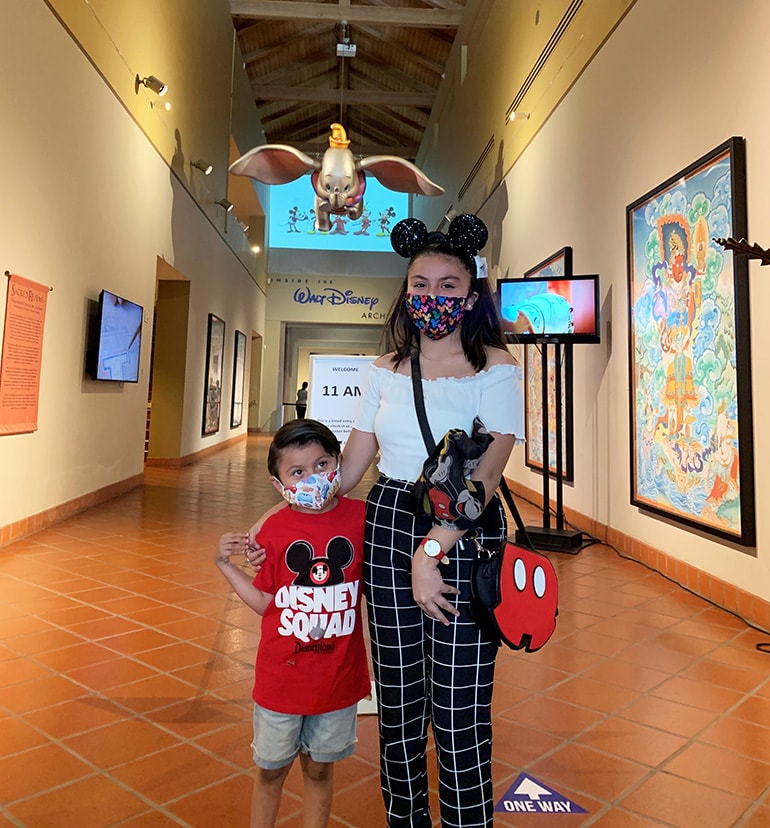 Photo courtesy of the Bowers Museum

Visitors wear masks at the Bowers Museum, which reopened Sept. 12 and is showcasing items from the Walt Disney archives.

“We opened two weeks ago. We did kind of a soft opening to make sure our COVID protocol was in place,” said Sarah Jesse, interim director and CEO of OCMA. Former director and CEO Todd Smith left the museum Aug. 14 to take a job as executive director at the Bechtler Museum of Modern Art in Charlotte, North Carolina.

“Tropical Geometries” by Carolyn Castaño is currently on display at OCMAExpand in Santa Ana.

“We’ve been averaging about 50 (visitors) a day, since we reopened,” Jesse said. “We didn’t promote it too widely. But people are really anxious to come back, so I really anticipate (an increase).”

A virtual discussion with the artist and guest curator Ricardo J. Reyes is planned for Thursday, Oct. 8 at 5 p.m. And a sixth exhibition, “Alexandra Grant: Telepathy is One Step Further than Empathy” is scheduled to open Oct. 15.

Meanwhile, OCMA’s new building is making steady progress, and most of the structural steel has been installed. A virtual “topping out” ceremony — during which the final structural beam will be placed — is scheduled for 11 a.m. Tuesday, Oct. 6 on Instagram @ocmuseumofart. The full video will be posted on IGTV following the live online broadcast.

Jesse said the progress on the museum since its groundbreaking last September has been “unbelievable.”

“It’s extra significant for us,” she said. “It’s been over a decade in the making. During this time of COVID, it’s especially meaningful. People really see the construction continuing to happen as a sign of optimism. It’s a civic sign of optimism and a real beacon of hope.”

And the search for a new director and CEO continues. The national search firm Koya Leadership Partners is conducting the search, and so far the firm has found some promising candidates.

“We’ve had a lot of interest in the position,” Jesse said. “We’re looking forward to getting some great talent. It’s on track basically. We don’t have a firm timeline yet. The most important thing is to get the right person.”

Down in San Juan Capistrano, the historic Mission San Juan Capistrano has actually been open since June 12. Many of the mission’s attractions are outdoors, including its gardens, thus allowing for visitors to stroll on rerouted pathways. Visitors must wear masks or cloth over the nose and mouth, and no eating is allowed while walking on the grounds. Capacity has been reduced to 25% in Serra Chapel, one of the most historically significant chapels in California.

“We are opening gradually and seeing a nice rebound in attendance on the four days a week we are open to the public,” said Mechelle Lawrence Adams, executive director of the mission. “On the other three, we are getting (a) regular amount of bookings for small group tours and photo shoots. All of our actions are in compliance with CDC and local ordained standards.”

Adams acknowledged that the mission has encountered some difficulty in getting visitors to wear masks and to keep them on.

“We have had many difficult mask enforcement issues, but we continue to graciously uphold safety for our public, staff and students as a core value,” she said.

In Fullerton, the Muckenthaler Cultural Center has reopened its indoor gallery on a limited basis. A new exhibition, “Nestle into Nature: Movements Seeking Balance” opened Aug. 17. It’s open for private viewing with an advance reservation for groups of four people or less, according to Ana Cottle, communications director. For a $5 entry fee per group, visitors have 15 minutes to view the gallery. Masks are required, and there is a 15-minute buffer between groups, so there’s no overlap for visitors entering and exiting.

“We’ve had a great response and the reservations are pretty consistently booked,” Cottle said. 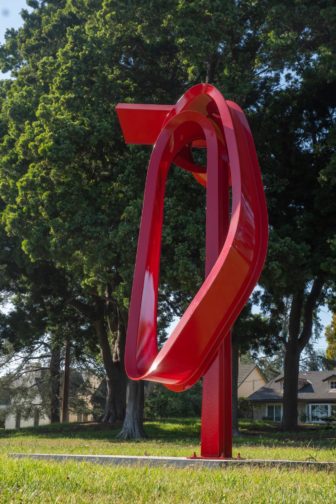 Photo courtesy of May Nguyen

“Godot” is a 12-foot sculpture by Bret Price of Orange. It’s on view at the Muckenthaler Cultural Center’s  sculpture garden.

The museum also has an outdoor sculpture garden that folks can visit for free.

The City of Brea Art Gallery is in between exhibitions, but will reopen Oct. 10 with the 52nd Annual Watercolor West Juried Exhibition. The gallery has implemented an online ticketing system, according to Katie Chidester, marketing coordinator for the gallery.

Masks and social distancing will be required for all visitors, and there will be additional screening measures upon entering. There won’t be a reception for the group show or any additional in-person programming, Chidester said.

Though the museum reopenings in Orange County have been plentiful, so have the art institutions that remain closed.

For up-to-date listings of what museums, galleries and art institutions are open, check out Spark OC’s phased reopening list.

What About the Galleries?

In Orange County, there’s been a little bit of confusion about where galleries fit in the “Blueprint for a Safer Economy.” Many gallery owners have considered themselves retail, so they went ahead and reopened in late May with other businesses.

However, some have interpreted the guidelines as lumping galleries in the same category as museums, zoos and aquariums, and have waited until now to reopen.

“The governor was very vague — I thought he put galleries and museums in the same category,” said Blake, who is also a Laguna city council member. “Fine art galleries can be more like museums, with openings, lectures and people coming and having large gatherings. But I thought it was a mistake to push those two together.”

Blake is installing a new show and, after an afternoon appointment today, plans to remain open to the general public.

Sue Greenwood, who founded and operates Sue Greenwood Fine Art on North Coast Highway, opened her gallery when retail businesses in Laguna Beach reopened. She has participated in two First Thursday Art Walks, and requires visitors to ring a doorbell and wear masks.

Greenwood credits the city of Laguna Beach for making sure things run smoothly and encouraging businesses, even during four lively protests.

“Thanks to our city, through everything, even through all the racial injustice protests, everything went really smoothly with the police department and everything. We’re doing good. And people feel really comfortable and safe in Laguna.”

Next door to Greenwood on both sides, Joanne Artman has decided to keep her galleries closed and open only by appointment.

“It’s such a tricky time right now; everybody has to do what’s best for their business and staff.”