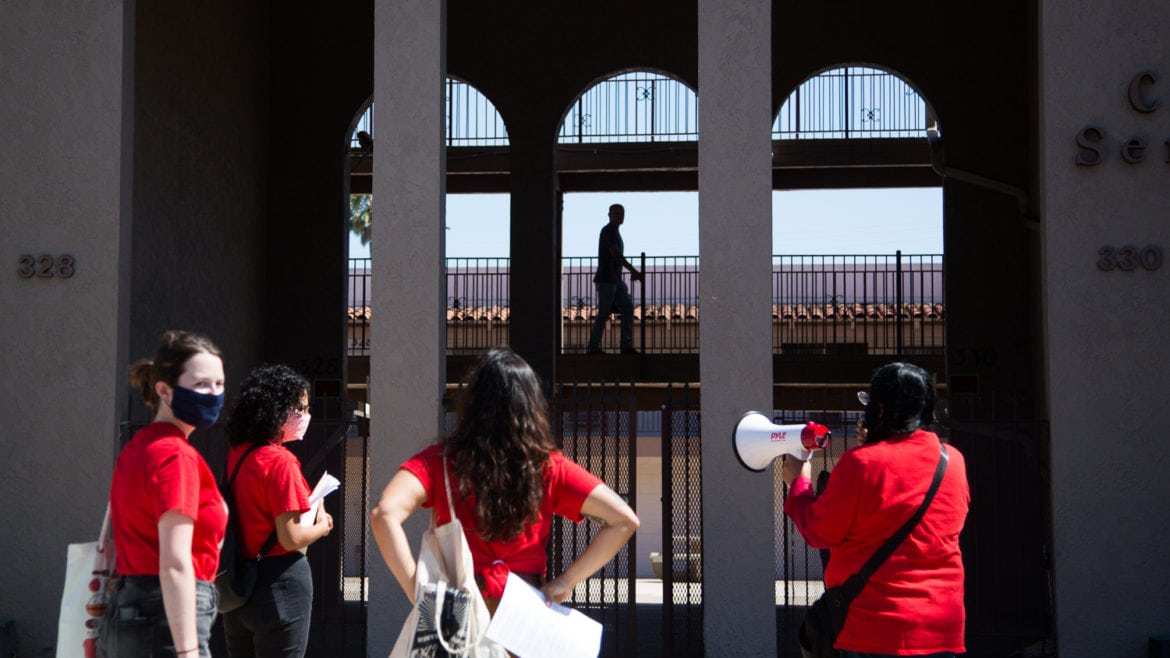 A majority of Santa Ana council members without discussion on Tuesday finalized measures that make it easier for housing developers to build higher-income apartments in the city.

On the same night, many of those same officials appeared not to support giving local activists more time to gather enough signatures for a rent control initiative in one of California’s densest and majority-renter cities.

“We need this — the Latino population needs rent control,” one speaker in Spanish, who didn’t give a name, said through a translator during public comment. “You need us, you need us to vote for you. We are here. Now we need your vote.”

The council was asked to direct staff to come back with a policy extending the signature-gathering period for citizens’ initiatives to place ordinances on the ballot.

Yet residents like her appeared not to have that support Tuesday night, despite council members Vicente Sarmiento and Nelida Mendoza voicing support for allowing activists to take another crack at the signature-gathering.

Mayor Miguel Pulido voiced opposition to giving residents the chance entirely. The rest of the seven-member panel was quiet, leaving no resounding direction to staff to move forward.

Then the full force of the pandemic hit, and coronavirus health concerns and orders to limit public interactions put a halt on Tenants United’s operations. “But within our brief window of campaigning, we demonstrated massive public interest in our campaign,” reads a letter from the group to the City Council.

In 2018, a similar rent control signature-gathering effort narrowly missed the threshold under the 180-day deadline. “We garnered substantial public support for our campaign, we needed 9,854 signatures and we ended up collecting 9,299 signatures,” reads Tenants United’s letter.

During the discussion Sarmiento asked his colleagues, despite whatever their personal views on rent control were (most council members have for years been opposed), “to take a step back and look at what’s been done.”

“To me, our job is to listen to those residents and when they reduce those opinions to writing and fix their names to a formal petition, that is the most sacred democratic act,” he said. “There is no more important sign of patriotism than going out and feeling strongly enough about an issue to go out and convince your neighbors to support or oppose it.”

He said the amount of people who’ve signed the petitions both now and in the past should speak for itself, adding:

“Whether you agree or disagree with underlying subject matter, this is obviously significant enough to so many of our residents and voters in the city, that it should be placed on the ballot for consideration of all of us.”

Members of the public, like community health worker David Carbajal, were in agreement: “There was a housing crisis before the pandemic, and it has only gotten worse,” he said.

The affordability problem became apparent to city officials themselves, who this year implemented emergency rent freezes and eviction bans for renters — many of them undocumented — suffering financially and under pressure from landlords.

“We need real rent control and protections around evictions now more than ever,” Carbajal added. “Today we’re pursuing that process. We’re asking the City Council once again to use your power to let voters decide the future of rent control in the city of Santa Ana. We need it. We need protection for our community.”

Councilwoman Mendoza said she supported the extension of the deadline for signature-gatherers, but trailed off into a tangent about how there may be other solutions to the housing affordability problem in Santa Ana and warned against somehow favoring one group — developers or signature-gatherers — with any decision the council makes.

Still, she said, “I will be supporting this to allow these signature-gathers to go and gather more signatures.”

Said Mayor Pulido: “I believe this is a slippery slope and I would not want to encourage the council or folks to bring rent control to the city and that is the potential outcome of these efforts.”

“I just think this would be going in the wrong direction,” he added. “Things are what they are. We had the pandemic — they run out of time; they’ll probably be out there again two years from now, collecting signatures, but I don’t want to be part of an effort that would facilitate that.”

No other council members spoke on the item, with no direction to staff to come back at a future meeting with a new policy direction.

The City Council earlier Tuesday night gave final approval to relax certain parts of the city’s Housing Opportunity Ordinance, which for the most part requires developers to either include low-income units in their plans or pay into an “in-lieu” fund helping the city build them elsewhere.

The action came two weeks after a lengthy council discussion that accompanied the first vote.

Sarmiento, the lone dissenter, said that in-lieu fee is now down to $5 per habitable square foot from $15. Council members also narrowed the criteria for projects to which the policy would apply.

Real estate groups and construction unions argue Santa Ana has exceeded its affordable housing goals set by the state, the ordinance is too burdensome; and that the coronavirus pandemic has pummeled the local economy and made development incentives necessary.

Opponents — affordable housing advocates and community activist groups — say the city has already been building for-profit, higher-income housing at a fast rate and that those state-set housing goals don’t accurately characterize what critics fear is still a great need for affordable housing.

The item was attached to a bloc of other items on the consent calendar, so it went through without discussion.