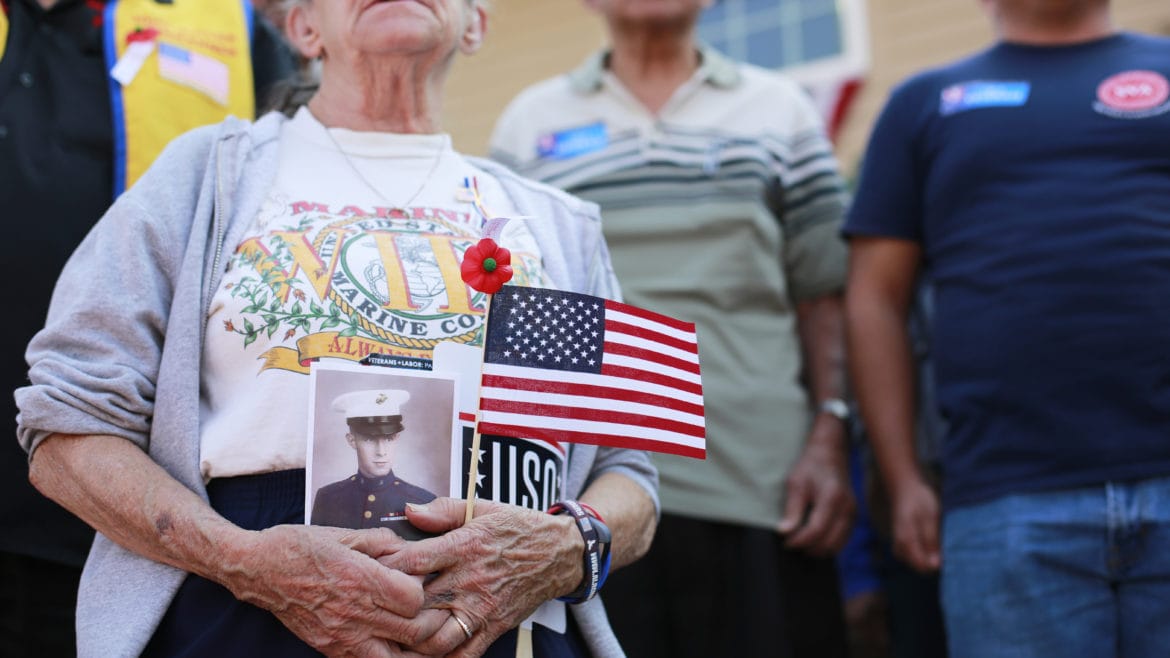 Anita Beuschiein holds her husband's memorial pamphlet on Nov. 10, 2018 during an event in remembrance of Veterans. John Andrew Beuschiein, her husband, served 20 years in the military and died from complications of Agent Orange.

The Orange County Veterans Cemetery site is once again up for grabs after the California Department of Veterans Affairs told local officials it would be examining two sites in Irvine, choosing to pass over the city’s decision and make their own choice.

Meanwhile, the Orange County Veterans Memorial Park Foundation broke off from the Irvine effort altogether, citing frustration over delays, announcing support for an alternate site on county property near the intersection of the 241 and the 91 freeway yesterday.

In a post on Facebook, the group asked Irvine to reject any attempt to put the cemetery within city limits.

Yet state officials have already informed city officials they are moving forward with a deep look at Irvine sites.

According to an email sent to Irvine city staff by the department’s deputy secretary John Spangler and obtained by Voice of OC, the state has paid Huitt-Zollars Inc, an engineering firm with a branch in Irvine, to review both sites and inform the state before they choose a site to place the cemetery.

Currently, $700,000 is set aside in the state budget to finance the study, with results expected by June 2021 according to the email.

The two sites in question are both on the former El Toro Marine Corps Air Station, with one set on a set of land where an air traffic control tower and hangars still stand and the other on a site zoned to become a golf course.

The new studies could also finally put to rest the arguments over what the cemetery would cost at both sites-the golf course site was never officially reviewed by the state, but was reviewed by Irvine city staff in 2018, and city staff updated an earlier review of the hangar site at that time.

Opponents of that study said that because it was conducted by the city and not the state, its results were invalid.

Whichever site the state chooses will then be granted $24.5 million set aside in the state’s budget, but regardless of which site is chosen there is at least a $30 million funding gap according to estimates produced by Irvine city staff in 2018.

In an email to Voice of OC, the department confirmed they are also applying for a grant from the National Cemetery Administration to help accelerate the process.

That announcement comes after the Irvine City Council approved a ballot initiative calling for the cemetery to be built exclusively at the hangar site in May. But the state still has the final say on where the cemetery is built, as they are responsible for constructing and maintaining the site.

After the city chose the hangar site, proponents for the site called on the council to start demolition immediately, but the Irvine City Council deadlocked in a 2-2 vote over funding the project at the end of June.

Veterans groups who opposed the selection of the hangar site are praising the state’s decision to review both sites.

“This is an absolutely wonderful development to finally, once and for all, determine the facts in an objective way.” said Nick Berardino, leader of the Veterans Alliance of Orange County in a phone call with Voice of OC.

“This eliminates all the crazy political nonsense and adversarial chess moves that have been played by a number of people who’s self-serving interests were directed to build on the (hangar) site.”

Larry Agran, a former mayor and current Irvine City Council candidate who helped lead the ballot initiative to put the cemetery at the hangar site, called the state’s study of the golf course site “truly irrelevant.”

“The land use law of the city of Irvine says there is only one exclusive site for a state memorial park and cemetery, and that is the ARDA site. The city owns the land, so what the state of California thinks doesn’t overrule local law, which could not be more clear,” Agran said in a phone call with Voice of OC. “Somebody is just trying to breathe life into a dead horse.”

The state announced they would be hosting a virtual kick off meeting to discuss the process in roughly the next two weeks in the email, but no firm date is set.