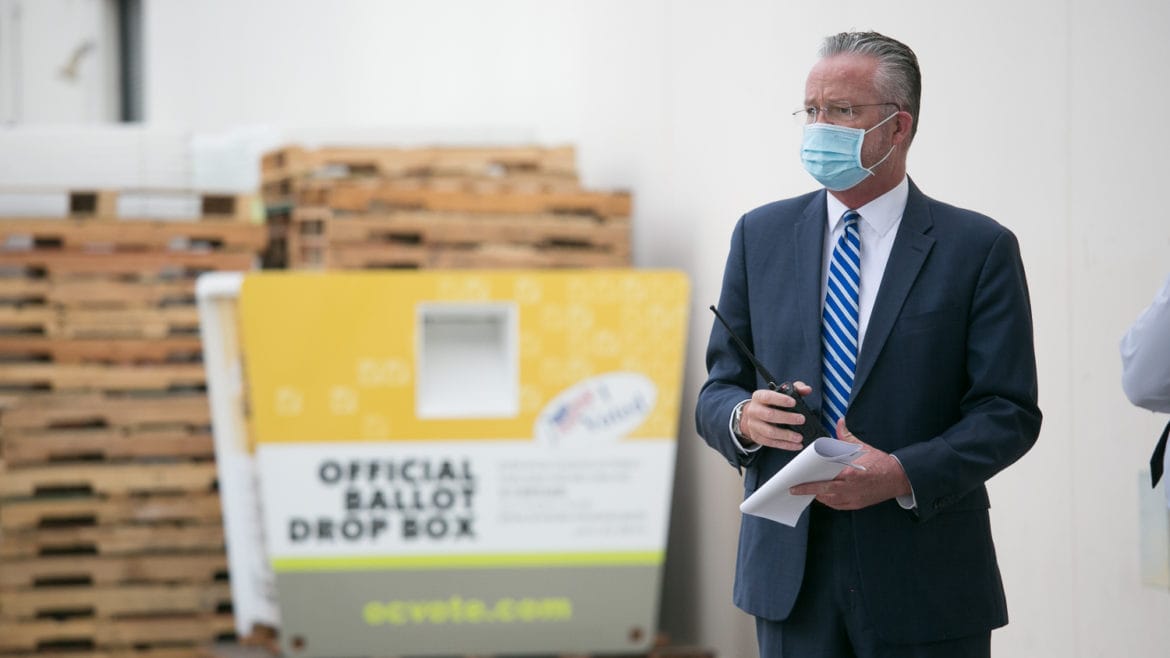 Neal Kelley, the registrar of voters, during an elections media event on Oct. 5, 2020.

More than 129,000 Orange County residents have already cast their mail-in voting ballots ahead of election day so far.

Compare that to just roughly 62,000 ballots returned four days ago, and five days after the county sent out mail ballots to all of the county’s more than 1.7 million registered voters.

Yet even then, Orange County Registrar of Voters Neal Kelley noted on Twitter it was already a “whopping” 451% increase compared to 2016.

There are still 20 days to go.

“It’s one more indication of an increasingly motivated electorate,” reacted Fred Smoller, political science professor at Chapman University, in a Tuesday interview. “There’s a lot of interest in this election; people feel there’s a lot at stake and are expressing that by voting early.”

It’s only amped up anticipation for what’s expected to be one of the most consequential election cycles in history — both for the county and its cities, as well as the entire U.S.

Kelley has and continues to voice public excitement over the trends.

“What’s really significant for me is we just mailed the ballots, and within a few days we had return rate figures of 100% above four years ago — that’s unheard of,” Kelley said to Voice of OC on Tuesday. “You might see that a couple of weeks in, but a few days after sending them out? That’s historic. It’s never been done before.”

As of Tuesday, roughly 100,000 of the 128,000 early-returned ballots at the time came in through the mail, Kelley said. About 28,000 came from mail ballot drop-off boxes. “Less than a couple hundred” came in over the counter at the Registrar’s office.

The local voting from home rates also come in the midst of a global Coronavirus pandemic, which has resulted in more than 55,000 total Orange County cases since the local crisis kicked off in March and has claimed 1,341 lives here so far.

Though Kelley maintains his office has adjusted to meet the workload. Right after the primary, he said he doubled the Registrar’s capacity to deal with ballots on the understanding more people would vote from home, by getting new ballot sorters and scanners: “At the time I thought the Fall would be all mail.”

Since then it’s become clear that residents this November will have the option of going to vote in vote centers, which will have social distancing and public health measures in place.

Smoller still worries there may be some newfound “distrust” in the system.

He was looking at recent reports about the California Republican Party’s self-proclaimed “Ballot harvest program,” which is the collecting of ballots through unofficial ballot drop-off boxes — an action that’s been declared unlawful by state officials and has prompted an investigation by Orange County District Attorney Todd Spitzer’s office.

Most of the ballots so far have been returned by registered Democrats. As of Oct. 13, Democrats made up 49,291 of the ballots. Republicans made up 28,507. No-Party-Preference voters comprised 20,009 of them.

Kelley remarked his office has seen an increase in the use of officials drop boxes “right here in Santa Ana since that story broke.”

“We’re also seeing a lot more people coming into our office, saying ‘I want to drop it off personally or at the drop box here’ — but I’m also seeing an increase in usage of our drop boxes out in the field,” he said, adding he’s unsure if there’s a correlation but this is what’s being observed.

“There have been recent reports of groups promoting unofficial ballot drop boxes that are not affiliated with Orange County, CA Elections. Voters who want to return their ballot at a drop box should only use official drop boxes. View the press release at https://t.co/rZGjhYKii0 pic.twitter.com/0f1MJrx3Hm“

Fears over ballot harvesting by Democrats were something Republican officials bemoaned since the advent of widespread mail-in voting.

“There’s now some doubt about the integrity of the process. Can you believe the Republicans are putting out fake drop boxes?” Smoller said.

Republican Party of Orange County Chair Fred Whitaker didn’t respond to a request for comment on the early return trends and how the recent controversy over the unofficial ballot drop boxes will play into them.

The state GOP released the following statement over the weekend amid the outcry:

“In California, where you can have convicted felons and individuals with a criminal history go door to door and collect ballots from voters, Democrats are now upset because organizations, individuals and groups are offering an opportunity  for their friends, family and patrons to drop off their ballot with someone they know and trust.”

We are going to respond to the letter, continue our ballot harvest program and not allow the @CASOSvote @AlexPadilla4CA to suppress the vote.

The GOP’s local ballot operations were incidentally brought to light in a tweet by a Republican supporter and volunteer for Orange County Supervisor Michelle Steel’s congressional bid in the 48th District.

The photo he tweeted out contained a picture of one such unofficial box, which labeled itself an official box.

The original tweet appears to have been removed, but local progressives and Democrats soon seized on it, screenshotting and reposting it, igniting a firestorm of uproar in the process.

Steel this year is challenging the district’s incumbent Congressman Harley Rouda in what has so far been a bitter, attack-ad filled campaign by both sides.

“I know that in the primaries California in general had its largest turnout in history and I believe we are moving toward that direction again, especially to have Orange County’s highest turnout in history,” she said. “I think it’s indicating the change we’ve been talking about — you know, we have a 43,000 voter registration lead and now we’re working hard to get them out there.”

But she stopped short of seeming overly ecstatic, warning there’s still much work inside her party to be done:

“We still have a lot of work to do and have to double down our efforts to reach out to Latino, low-income and younger voters — we’re definitely needing to reach out to younger communities. We want to see those early return numbers come in with them included.”

Kelley said it remains to be seen whether voter turnout in Orange County will break or shatter previous turnout records.

“I would say my gut reaction is yes,” he said. But with 20 days to go, “I don’t know where the trend lines are going to go. Are we going to see a dip in the coming days or weeks, or the same level consistently to election day?”

Visit Voice of OC’s 2020 election page for more information about voting by mail and the significance of this historic cycle.