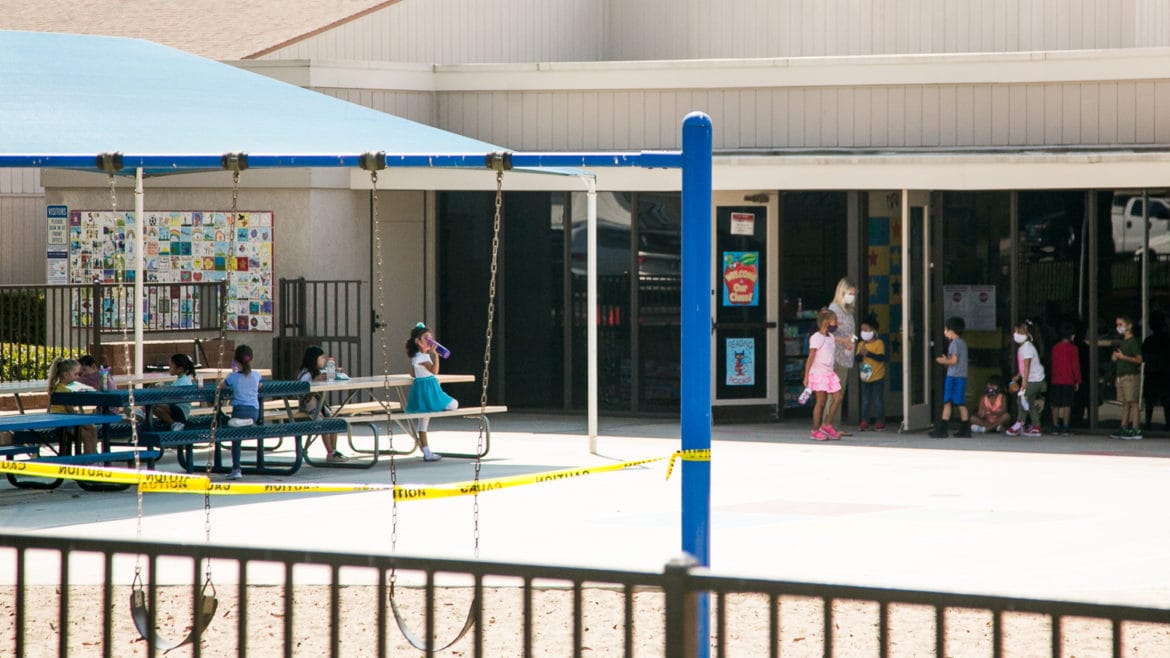 Students outside at Carl H. Hankey School in Mission Viejo on Oct. 5, 2020. The Voice of OC is not aware of any cases of Coronavirus or exposures at this school.

Some Orange County school districts are delaying reopening classrooms after concerns and pushback from parents, teachers and principals as cases have slightly upticked over the past couple weeks.

The Newport Mesa Unified School District has a special meeting this afternoon to consider delaying reopening classrooms until next year.

The meeting comes less than a week from when the district had planned to allow middle and high schoolers to return to school.

Newport-Mesa Federation of Teachers President Tamara Fairbanks said she believes all the high and middle school principals in the district pushed for the delay from what she’s heard but has not been in contact with the principals herself.

One teacher, who spoke on the condition of anonymity because they fear retaliation, said the principals in the district pushed back on the reopening plans because classroom and scheduling plans weren’t sufficient.

“We don’t even have our schedules,” the teacher said in a Wednesday phone interview. “They want us to come back Monday.”

Students, the teacher said, asked what time they should show up to class next week and the teacher didn’t have an answer for them.

Although the teacher said they want to get back into the classroom, desk spacing plans and other safety measures were unclear to them and their current classroom wouldn’t fit their students following the six-foot physical distancing guidelines.

The teacher also said the plans would’ve decreased time teachers had to work with students by having students miss out on two days of instruction, similar to Capistrano Unified School District’s reopening plans.

Prior to the meeting some readers reached out to the Voice of OC to express their concern with the late notice of the meeting as well as concern for students’ mental health, emotional and social development from prolonged distance learning.

“Since ‘special meetings’ only require 24 hour notice to the public, I can only assume this was deliberately done to avoid or minimize input from the public,” one person wrote to the district’s board of education and the Voice of OC.

“I am STRONGLY against the continuation of online learning as it has been shown to be harmful to students, negatively impacts the most vulnerable and disadvantaged students, and is unnecessary.”

The Newport-Mesa Federation of Teachers are still in negotiations with the district over reopening. In the past, Fairbanks has called their reopening plans vague and said teachers have many unanswered questions and are concerned with the safety measures in place.

Some teachers in the district have been pushing back against a return to school. Much of the district — like the county — has been divided over wanting students back in the class.

“We are in support of a delay and we’re still in the middle of negotiations trying to make sure that we have all of our safety measures in place for our elementary and special education people,” Fairbanks told the Voice of OC before the meeting.

While some districts are slowing down on a return to the classroom others have continued to reopen schools like Capistrano Unified School District despite some opposition.

Since the pandemic began in March, the virus has killed 1,306 people out of 55,183 confirmed cases, including 14 new deaths reported today, according to the county Health Care Agency.

Due to reporting regulations, the dates of those 14 new deaths can stretch back up to two weeks.

Hospitalizations dipped from 183 yesterday to 172 people Thursday, including 62 people in intensive care units.

Over 918,000 tests have been conducted throughout OC, which is home to roughly 3.2 million people. Some people, like medical workers, get tested numerous times.

According to state guidelines, an outbreak is defined as three or more cases within two weeks.

The high school has nearly 3,000 students and staff who are back in classrooms.

There’s also been one employee who tested positive at Hopkinson Elementary in the district.

Another case was reported less than a week later.

“A third Fullerton College student enrolled in an in-person lab, tested positive for COVID-19. The student was symptomatic when they last attended classes on September 29,” reads Monday email.

It’s unclear if it’s people from the same lab class.

College officials urged the other people in the lab to quarantine.

“The nine classmates in exposure proximity and the instructor were advised to get tested and quarantine until October 13. An additional three sections taught by the instructor will be taught online until the instructor may resume teaching in-person on October 14 at the earliest,” reads the Monday email.