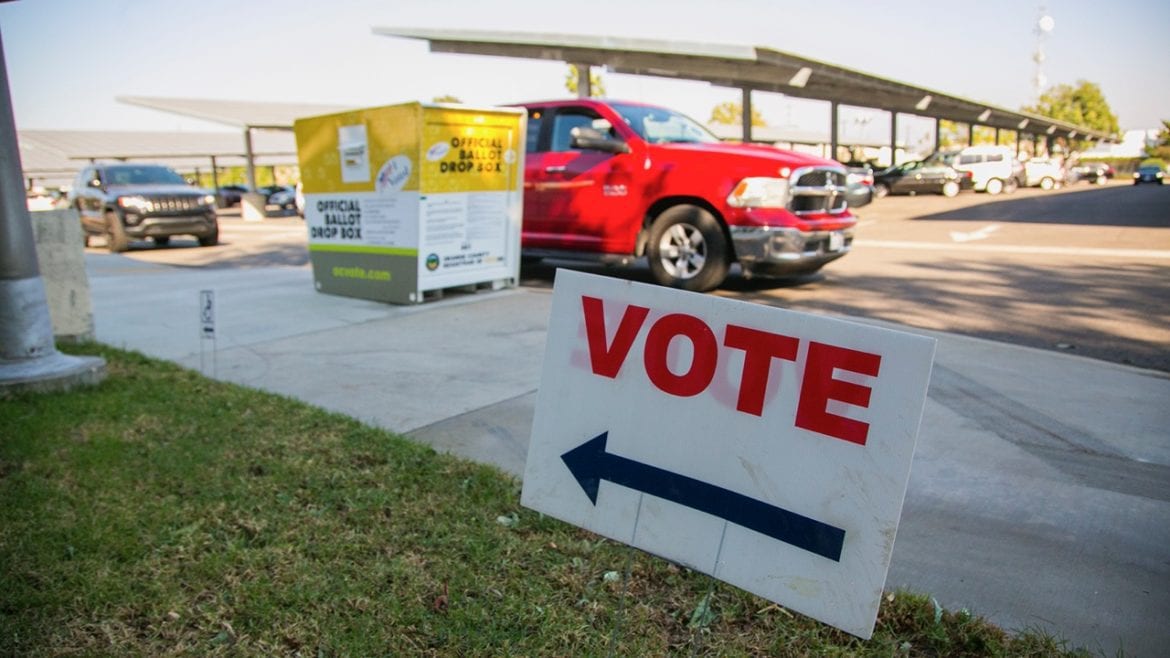 Voters drop off ballots at the Orange County Registrar of Voters on Oct. 28, 2020.

More than half of registered voters have cast their ballots in Orange County one day ahead of Election Day.

A cumulative 1.01 million ballots have been cast by mail or in-person, as vote centers opened Friday. The county has 1.771 million registered voters.

Over the weekend Registrar of Voters Neal Kelley was “strongly encouraging voters to vote ahead of Election Day … to avoid congestion.”


Since the beginning of the month, voters could mail their ballots to the Registrar’s office or drop them off at drop boxes placed all throughout the county.

Link: Click here to find a vote center near you

The largest, “supersite” vote center will be at the Honda Center in Anaheim, with features like drive-thru voting, drive-thru mail ballot drop offs, as well as a large area for in-person voting.

There will also be “pop-up” voting sites available in the county from today to Nov. 2, meant to reach voters where they are and provide voter assistance and registration. Click here to find the next pop-up locations and dates.

Last weekend, the Registrar’s office set up pop-up mobile voting sites at Laguna Niguel Regional Park and the Main Place Mall in Santa Ana, where over 1,000 people cast ballots in total from both locations.

Notably, the office tweeted Wednesday that around 600 ballots came out of the Laguna Niguel site — “a record for pre-election mobile voting.”

It’s been an unprecedented moment for the county’s elections office.

Aside from the fact that the Presidential, Congressional, and a few state and local city races are among the most anticipated in years, the Registrar’s office has had to grapple with changes to its operations as a result of the pandemic — increasing mail-in voting time frames, and decreasing in-person voting time frames.

Though Neal Kelley, the man in charge of making sure this year’s election runs smoothly, has maintained his office has adjusted to meet the workload. Right after the primary, he said he doubled the Registrar’s capacity to deal with ballots on the understanding more people would vote from home, by getting new ballot sorters and scanners.

“At the time I thought the Fall would be all mail,” Kelley told Voice of OC on Oct 13. Since then, it had become clear that in-person voting would happen.

Read: How is Coronavirus Changing Voting? A Q&A With Orange County’s Elections Chief

Kelley’s office this month also had to grapple with controversy around state Republicans’ use of unofficial ballot boxes — which they had labeled as “official” — and voter access issues in south Santa Ana, a transit-dependent stretch of the city that had few drop-off box locations available until city officials raised public alarm bells.

Then there were two wildfires that erupted on Monday this week, throwing a wrench, to some extent, into Kelley’s operations. He had to close as many as four drop boxes — at a time where he himself has expressed astonishment at the unprecedented early return rates of mail ballots — where tens of thousands of ballots were being collected out of them daily throughout October.

Read: How to Adjust Voter Access When Wildfires Interrupt Your Local Election

He also had to cancel a pop-up voting location in Santa Ana due to its proximity to evacuation zones and emergency traffic, and on Wednesday was in the midst of trying to find alternative vote center locations around the wildfire areas until fire officials lifted evacuation orders for affected north and central/south cities as the blazes became more contained and the threat lessened.

As of Thursday, there were no evacuation orders in place in the county.

Democrats have outnumbered Republicans in the number of early mail-in ballots with 320,201 cast so far. Republicans comprised 216,598 of the ballots cast, as of Thursday.

Elections experts have said the unprecedented early voting trends are one more indication of a much-anticipated election shaped by the pandemic, social justice movements over the summer, and political turmoil at the national level.