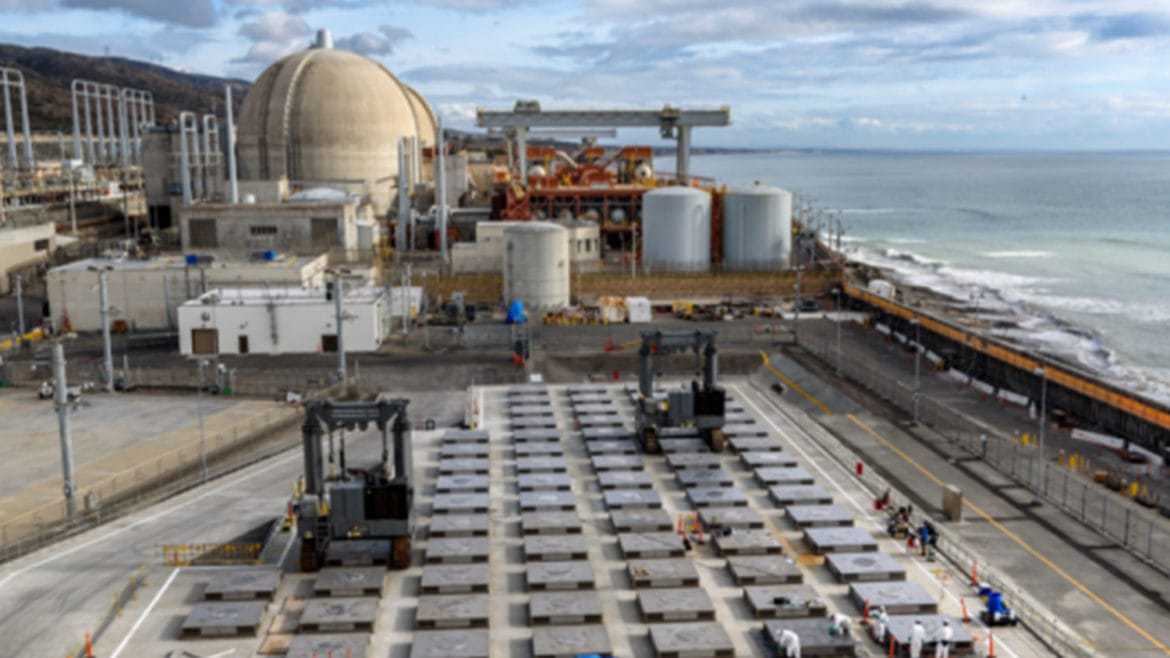 SoCal Edison’s spokesperson, John Dobken, authored an Oct. 20 editorial touting the dry nuclear waste storage system Edison chose when a radiation leak from steam generator malfunction forced permanent closure of the San Onofre Nuclear Generating Station (SONGS) in 2013. Ignoring for the moment the numerous obfuscations and omissions of critical facts, the essence of Dobken’s article is this: Edison wants to divert public attention away from the inadequacies of its dry canister storage system while promising that a deep geological national repository, as mandated in the Nuclear Waste Policy Act of 1982, will magically materialize before their storage canisters fail.

There’s plenty Dobken did not say that the public needs to know.

First off, we are nearly four decades past passage of the Nuclear Waste Policy Act and there is no tangible progress toward creation of a national repository operated by the Department of Energy. The cold hard reality is that no state wants it and, worse still, there is no feasible technology currently available to make a geological repository workable, according to the U.S. Nuclear Waste Technical Review Board. Plans for a geological repository at Yucca Mountain were rejected by Nevada, and subsequent proposals for “interim” storage sites in Texas and New Mexico are opposed by those states too.

Thus, the dream of a national repository remains in limbo for the foreseeable future, and it’s misleading to suggest otherwise. Also misleading is Dobken’s suggestion that, if needed, a failing canister could be transported to “a centralized Department of Energy facility” for repackaging in the future, as no such facility exists anywhere in the United States for this purpose.

Consequently, the plan throughout the country is to leave highly radioactive nuclear waste onsite indefinitely. The relevant 2014 report from the Nuclear Regulatory Commission (NRC) openly states that a repository might never become available. Like all other nuclear plant operators in the United States, Edison is saddled with a storage task never originally intended.

For dry storage, Edison chose thin-walled (just 5/8 inch thick), welded-shut stainless steel canisters which contrast sharply with the 10-19 inch thick-walled and bolted-shut casks many nuclear waste safety advocates in Orange, San Diego, and Los Angeles Counties are advocating for. Unlike the thick casks, SONGS’s canisters are vulnerable to stress corrosion cracking from numerous conditions, such as a salty marine environment like San Onofre. A 2019 Department of Energy report assigned “#1 Priority” to the risk of through-wall cracking in welded, stainless steel canisters in a moist salty environment. 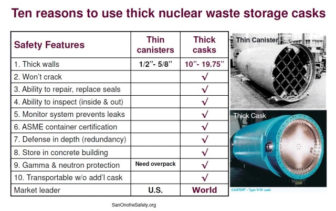 The 73 Holtec canisters at SONGS are warranted for only 25 years, covering only manufacturing defects. This means the warranty excludes environmental conditions like earthquakes, salt air, water intrusion, seagull droppings, and any other corrosive damage to the canisters. Edison has not divulged what the warranty covers on the 51 older Areva canisters, which are already up to 17 years old. Dobken’s statement that the nuclear waste will become less radioactive in 100 years is meaningless in the timescale of the hundreds of thousands of years the waste will remain deadly to humans.

Dobken argues that the fact SONGS’s canisters are welded shut and can never be opened is a plus. This completely ignores the crucial safety requirement in the Nuclear Waste Policy Act that spent nuclear fuel storage containers be designed to be monitored inside and out and the contents retrievable from the containers. Edison purposely chose welded shut canisters, making it impossible to monitor or retrieve the fuel assemblies, which means the canisters can’t lawfully be accepted by the Department of Energy (DOE) for either an interim or permanent storage site.

In arguing that robotic camera technology – which Edison applied to the exterior of a sample of eight of 123 total canisters in 2019 – can be relied upon to detect defects like cracking, Dobken hides the fact that Edison has admitted that this methodology does not meet American standards for an inspection. This is because nuclear storage containers are pressure vessels, thus subject to standards set by the American Association of Mechanical Engineers for safe storage and transport of nuclear pressure vessels which explicitly require use of either magnetic particle or dye penetrant methodology to inspect for defects like cracking (ASME N3).

Edison used neither ASME-approved method simply because they can’t be applied to their canisters which are both too hot, too radioactive and inaccessible in their concrete storage overpacks. Furthermore, a robotic camera can never access the bottoms or inside walls of canisters to look for cracks originating there. Nor can it characterize cracking that might start on the exterior but proceeds laterally rather than straight through the canister wall.

As regards the metal spray technology which Edison promises can repair a partially cracked canister and thus makes the cooling pools unnecessary, Dobken claims it is proven technology. Yet, in his article he fails to mention that it has never been used on a canister filled with radioactive spent fuel. That it has been used in various other applications (oil and gas, shipping, etc.) is irrelevant. NRC spokesperson David McIntyre confirmed that Edison hasn’t applied to the NRC to approve this technology and, furthermore, that no canister repair technology has NRC approval.

Consequently, many nuclear safety advocates are arguing strenuously for retention of the cooling pools until a specialized dry fuel handling facility (aka “hot cell”) can be constructed onsite. This is because the only means to repackage the radioactive contents of a defective canister into another container is to perform the transfer within a cooling pool or hot cell.

Dobken correctly points out that NRC is nevertheless allowing decommissioned nuclear plants to destroy the cooling pools. This highlights a troublesome relationship between NRC and Edison which the public needs to understand. NRC has granted safety exemptions and waivers in dry storage systems nationwide which has allowed Edison to proceed with a canister system that is unsafe and cannot legally be accepted by DOE into either an interim storage site or permanent repository. Consequently, there is no plan to prevent or stop radioactive releases.

This liaison between NRC and Edison played out during the July 2020 meeting of the California Coastal Commission when NRC representative, Andrea Kock, remained mute as Edison cited the unapproved canister repair technology as justification for destroying the cooling pools. Though community nuclear waste safety advocates ardently cited factual objections, Kock’s silence no doubt helped shape the unanimous vote of the nine commissioners to grant Edison’s request. However, that two commissioners literally uttered “boos” despite casting “yes” votes speaks to doubts about Edison’s plan among the commission’s ranks. 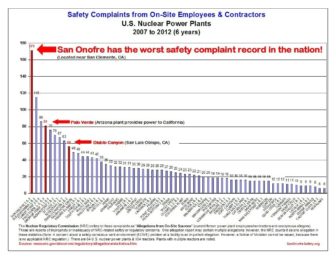 Lastly, Dobken offers no defense for the fact that San Onofre had by far the worst safety record of any nuclear plant in the country during its pre-2012 operation, yet he cries foul any suggestion this should undermine public confidence in how Edison is currently handling dry storage. What’s not mentioned is that, in 2018, it took a conscience-driven whistleblower to expose a near-drop incident where a 54-ton canister loaded with radioactive waste was poised to plummet 18 feet while it was being lowered into its storage overpack. NRC’s subsequent investigation attributed the event to both design flaws and human error and cited Edison with the single most serious violation ever imposed on a spent fuel licensee.

Moreover, it was only because of this incident that Edison bothered to look at the canisters with the contrived robotic camera technology, revealing that essentially all the canisters get scraped/gouged during downloading into storage overpacks.

Dobken makes one point with which everyone agrees: “The public deserves the facts about spent nuclear fuel and its storage.” As the public listens to this debate over safe nuclear waste storage, both sides should be held accountable for underlying motivations. In asking Edison to opt for bolted-shut thick-walled casks with safety features lacking in thin-walled canisters, community safety advocates are seeking safety for their families and communities. Edison, on the other hand, will save untold $millions should the public be swayed to trust in Edison’s promises that their canister system won’t fail and that a national repository will materialize in time to save the day.