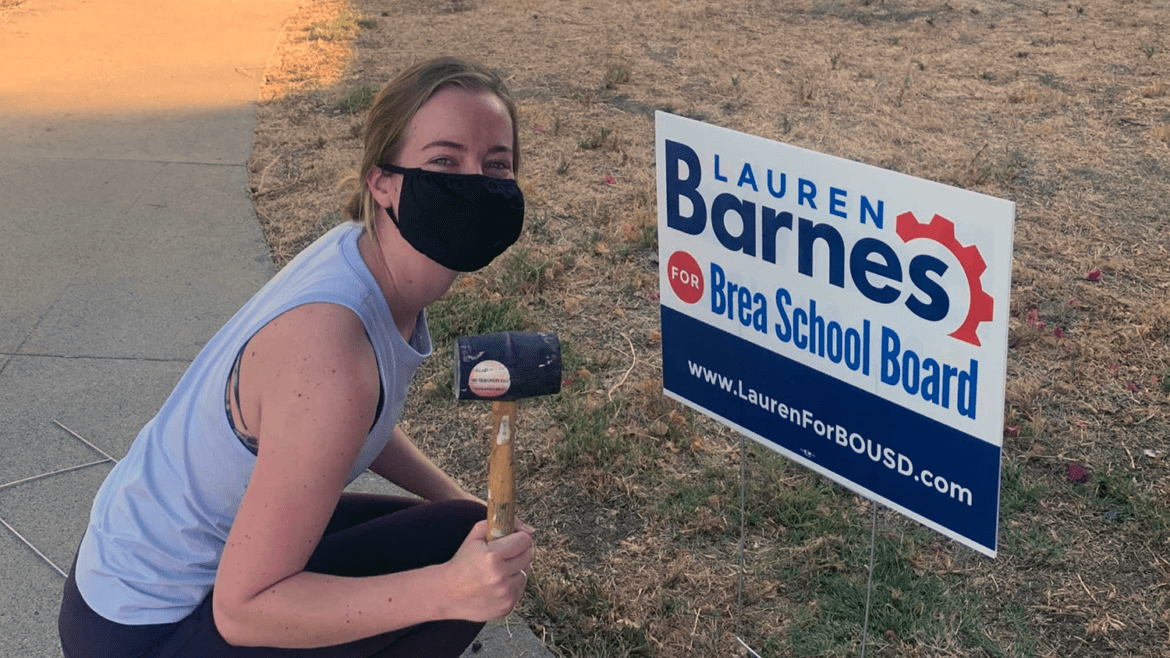 That was the winning margin for Brea’s newest- and youngest – local school board member, Lauren Barnes, after Orange County Registrar of Voters Neal Kelley certified the last official batch of ballots counted for the 2020 election this past Wednesday at around 5 p.m.

Kelley and a host of campaign activists, local party officials and media kept a close eye on the race throughout the week as the margin of votes was razor thin, especially when most races were one-sided results from Election Night or when it came to ballot updates throughout the week.

Kelley said officials kept a close eye on about 25 election contests where the margins were less than 100 votes as they finalized ballot counts in recent weeks.

The Brea race was a tie three different times.

Before Wednesday’s update, it remained a tie.

Then about eight votes were updated. Kelley knew the Brea race was in there.

“It is pretty crazy,” said Barnes, who will soon be sworn in as a Trustee for District 5 of the Brea Olinda Unified School District. “ I definitely never expected it go get this close. Certainly, been a nail biter,” she said just after the results were officially certified that gave her 1,805 votes over the 1,804 votes case for incumbent Gail Lyons.

“It’s a good example that every vote matters. Every vote can make a difference…” said Barnes, 26, a third-generation Brea resident who graduated from Brea Olinda High School in 2012 and eventually studied Biomedical Engineering before returning to her hometown.

Barnes, a registered Democrat who got involved in politics this past year with the battle over renaming Fanning Elementary into Falcon Academy of Science and Technology, said elective office came up as she asked herself where she wanted to contribute more as a volunteer.

Because of the pandemic, she said she focused on running a basic, grassroots campaign.

Secret to her success?

Barnes said she only raised about $3,000, focused on signs and door flying, hand wrote post cards to supporters and kept a functioning website.

As a former student, Barnes said she brings a fresher, nonpolitical perspective to the board, something she believes resonated.

“Ultimately, I think people were wanting to see someone new with different perspectives,” she said.

Indeed across Orange County, voters engaged in the 2020 election like never before.

Not since the early 1960s, when Orange County’s voter rolls only numbered around 400,000 compared to 1.7 million today, have this many voters engaged.

In the midst of a pandemic.

Here in Orange County, the results continue to indicate a very purple county, with a real stand off between local Democrats and Republicans on voter registration and a growing block of independent voters.

The election resulted in a mixed bag of results for both political parties.

They also flipped two key Republican state senate seats in the 37th and the 29th Districts.

In Orange County’s central urban core — Santa Ana and the Little Saigon communities of Westminster and Garden Grove — Republicans kept County Supervisor Andrew Do’s seat in a district where they had a disadvantage in voter registration, with Do solidly beating out Westminster City Councilman Sergio Contreras.

For a complete list of results in all races across Orange County, visit our elections page – which this season became a pilot project with the Reynolds Journalism Institute at the legendary journalism program at the University of Missouri.

The special partnership enabled our Digital Editor, Sonya Quick, to quickly post realtime results from multiple counties — all at once and automatically.

Gone are the days of having to visit multiple county registrar’s websites to figure out results for congressional and state races.

It’s our aim to make it a regular staple of election night at Voice of OC.

Keep in mind that coming out of this election season, another is quickly taking shape over the holidays.

With Steel moving to Congress, that means there’s a special election coming to serve out the remainder of her term representing the Second Supervisorial District, representing much of the coast as well as cities like Costa Mesa, Fountain Valley and unincorporated areas like Midway City.

That upcoming special election, expected early next year, will tell us a lot about the color Purple in Orange County.