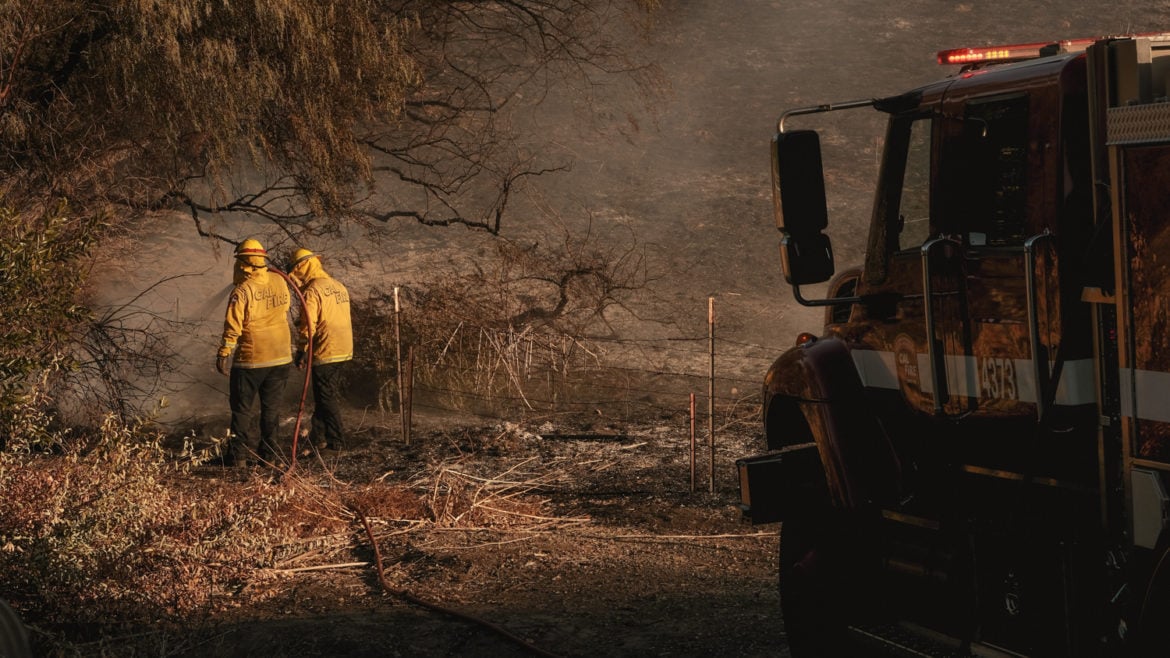 Firefighters putting out a small active fire by the side of Silverado Canyon Road due to the Bond Fire on Dec. 3, 2020.

“In Silverado we often feel like we have to fight for ourselves, and it’s a little exhausting,” said Sarah Nightingale, one of many residents to speak out at a Sunday workshop with public safety officials.

Of the three wildfires to hit Orange County in the last three months, Wednesday night’s Bond Fire was the most destructive, destroying 28 structures and damaging an additional 19 so far.

The next few days remain tense for local residents.

There are concerns about winds in the next few days and a red flag warning for further fires remains in place until Tuesday night.

Meanwhile, residents have been cleared to return home after this week’s evacuation.

Residents who spoke out were largely respectful of firefighters’ and Sheriff Deputies efforts on the front lines, repeatedly thanking them for their work.

But the same thread came across in all the comments: People weren’t notified about the oncoming fire.

This week, officials estimate more than 25,000 had to be evacuated.

Bad communication is an issue that keeps coming up in Orange County’s disaster response. A grand jury investigation last year concluded that public safety agencies need to do a much better job of communicating between themselves and alerting the public during disasters.

In addition to the communication challenges, residents also pointed out how crippling it was for many to be without any power.

Southern California Edison cut out the region’s electricity earlier Wednesday night following red flag warnings in the area due to high winds, but residents say that move could have cost lives.

In Silverado, Williams and Modjeska Canyons, the primary areas evacuated due to the fire, cell phone reception is spotty at best according to residents, and the loss of power stopped any notices from going out to home phones or other devices dependent on wifi.

“My family, which has landlines as well as cell phones, were able to receive official evacuation notices only after we left the canyon,” said one anonymous comment submitted to OCFA online. “The notices had been sent much earlier, but we had no idea.”

During Sunday’s public conference, one man began to cry as he shared that his home was one of the 11 that burned to the ground and that he didn’t have a way to call in the fire.

“You guys all did a great job…but if we would have been able to call 911 and had a response from anywhere, I don’t care if it was Chicago, we might have saved the house,” he said. “Something really needs to be done. We could have had dead people all over the place. I built my house 40 years ago, I loved it. There’s nothing there but ash.”

“It’s not your guys fault, but it’s somebody’s fault that there’s no communication out there when this happens. The county is putting 2-3,000 people in Silverado, putting their life in jeopardy, if they are out there and there’s no way to know anything.”

Multiple residents said they had to take on the notification themselves, going door to door waking up neighbors, honking car horns and trying to get the word out for over an hour before the OC Sheriffs’ arrived.

Roughly 30 deputies were sent out to go door to door, according to the sheriff’s department, but several members of the crowd said they never saw any deputies near their homes while they tried to evacuate.

“I stand with and for our police department and fire department, but our power went off at 7 p.m. The fire started at 9 p.m. and at 10 p.m. we had no idea anything was going on,” said one commenter at the Sunday meeting.

Ron Roberts, OCFA Division Chief and the incident commander for the Bond Fire, said they were already brainstorming ways to improve communication.

“In our meeting yesterday this same topic came up. It’s a common thread, we will be working through it with the county,” Roberts said. “You can count on this being addressed.”

Nightingale also went over the cost benefit analysis of preemptively shutting off power in the canyons, earning praise from the crowd and on social media.

“I also just want to reiterate how vulnerable we are when that power goes off,” Nightingale said. “At some point the risk of turning the power off to our homes becomes less of a risk than having a whole community of people who run generators…our inability to communicate with each other when something goes wrong. The inability to call 911 or to check in on elderly neighbors, or to call in a fire hotspot that may have arisen.”

No representative from Edison came to either conference, and fire officials repeatedly said they could not address the decisions behind cutting power to the affected areas.

In a statement to Voice of OC, Edison said homeowners were repeatedly told about the shutdown ahead of time.

“We understand that this is a difficult time for the residents of Silverado Canyon. SCE de-energized some circuits in the Silverado Canyon area, including the circuit segment serving the 29000 block of Silverado Canyon, and provided 48-hour and 24-hour advance notifications to customers of the potential Public Safety Power Shutoff in the area, SCE encourages customers to sign up for PSPS alerts and ensure their contact information is up to date by calling 1-800-655-4555 or visiting sce.com/pspsalerts. To learn more about PSPS and SCE’s notification process, visit sce.com/psps.”

Edison confirmed nearly 600 households were still without power and would remain that way through the night, but that the company would have a better idea of how long repairs would take on Monday afternoon.

While none of the agencies present at the meetings commented on the electricity shutdown, OC Sheriffs’ Lt. Gary Knudsen also brought up that emergency responders were impacted by the shutdown, and that while they coordinated with multiple outside agencies their own communications were hindered by the lack of power.

“I think it’s something we’re going to have to explore with them in the future. Unfortunately, they’re not here,” Knudsen said at the Saturday conference.

Steve Kaufmann, the CalFire public information officer who ran the Sunday meeting, thanked everyone who came to the conference, encouraging them to continue reaching out to local officials with their thoughts on what could be improved. .

“I encourage you to continue the dialogue. This meeting isn’t the end,” Kaufmann said. “We want to make things better.”