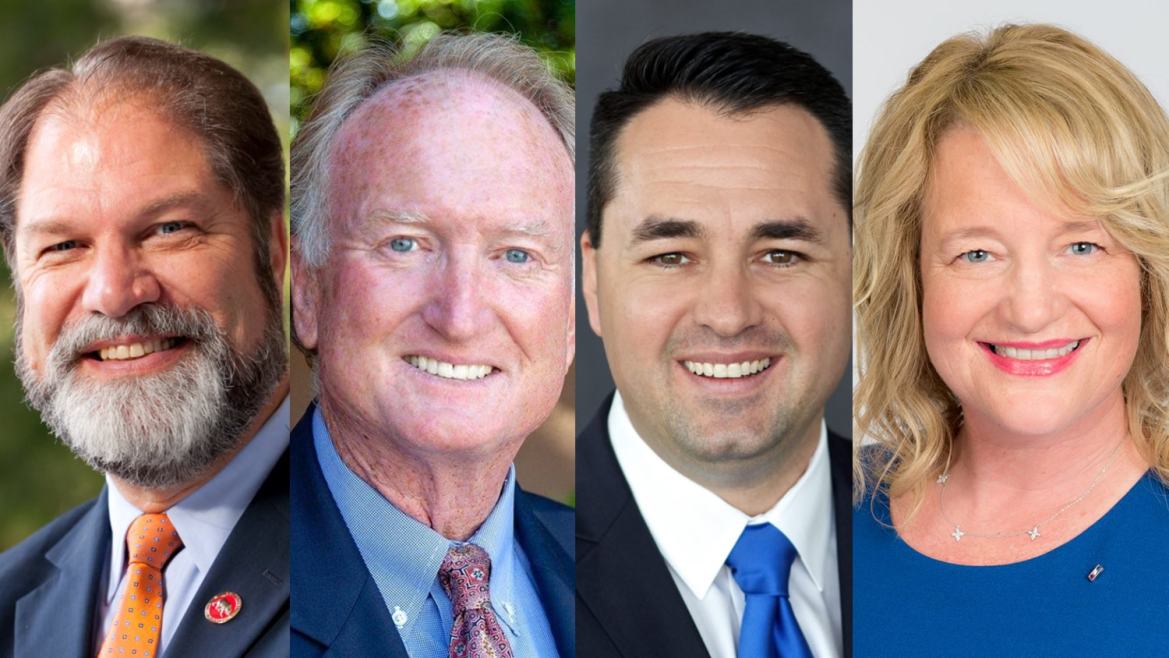 Orange County’s Republican and Democratic parties have chosen their endorsements in the crucial contest for 2nd District county supervisor next year.

But when it comes to Republicans, that doesn’t necessarily mean they’re coalescing around one candidate.

On Monday night, Democrats rallied around Katrina Foley, unanimously endorsing the Costa Mesa mayor who is the only known candidate from their party.

Two weeks ago, the county Republican Party endorsed John Moorlach, the former state senator who used to represent the 2nd District on the Board of Supervisors. Moorlach, who famously predicted the county’s 1994 bankruptcy, most recently served in the state Senate until he was defeated in last month’s election.

But there’s two other Republicans running for the seat as well – both of whom have resources and name recognition in the district.

“Right now I’m in it all the way,” Posey told Voice of OC in an interview after OC Republicans endorsed Moorlach earlier this month.

“I am a candidate that will bring people together, rather than divide,” Muldoon said in a text message to Voice of OC this week.

“With the state forcing the early release of prisoners and dangerous calls for defunding the police, it is now that we must unite to protect the safety and prosperity of our community,” he added.

Moorlach has said it’s important for Republicans to rally around him to help prevent the seat from falling into Democrats’ hands.

“Katrina Foley is going to be a strong candidate. And if we have more than one or two Republicans…a divided vote means that Foley could prevail. And so that would be unfortunate,” Moorlach told Voice of OC in a recent interview.

The election is expected sometime in March at a date yet to be determined by the current county supervisors. It’s seen as crucial by both parties because it has a huge bearing on how all five supervisor districts will be redrawn next year, as part of a redistricting decision that will determine which communities are in each district for the next decade.

And that redistricting decision is expected to play a major role in whether Republicans or Democrats have majority control of county government for years to come.

“Electing Katrina Foley to the Board of Supervisors is the most urgent priority of our Democratic Party and we urge Democrats and working families to join us in supporting this important campaign,” Ada Briceño, chairwoman of the Democratic Party of Orange County, said in a statement after the party endorsed Foley.

“We have great respect for the other Republicans who have shown interest in this race. But a Democrat victory in this special election will bring us dangerously close to losing our majority on the Board of Supervisors in 2022,” county GOP Chairman Fred Whitaker said in a message earlier this month to party members after Moorlach won the party’s endorsement.

“We must coalesce behind one Republican candidate to hold this critical seat. That Republican is John Moorlach.”

The opposition ads are now kicking off.

Tuesday evening, the county Republican Party sent out a mass email saying Democrats “endorsed far-left liberal Katrina Foley,” on a platform of “defunding our police, shutting down Orange County businesses and raising your taxes to pay for her out of control spending.”

“A win for Democrats will pull them one seat closer to flipping the entire Board of Supervisors,” the party wrote.

“We need all hands on deck to stop the blue wave from returning in 2021,” the party added, calling Moorlach “a skilled, pragmatic and principled legislator. His experience will help guide Orange County through this pandemic, fight back against Governor Newsom’s endless shutdown orders and protect our way of life.”

“In this year’s election, the Republican Party put all its chips down on a strategy of enabling the worst instincts and most destructive tendencies of Donald Trump,” said Foley campaign spokesman Derek Humphrey.

“They lost, and voters in Orange County’s 2nd supervisorial district rejected Donald Trump…I don’t think the rhetoric coming from the Republican Party is all that accurate or relevant right now.”

“It’s incredible that [Republicans] would say stuff like that given that the only thing that she’s done is advocate for our safety during COVID-19,” said Briceño, the Democratic Party chair. “They should be advocating for our health and making sure that we’re safe.”

Meanwhile, Moorlach is staying out of the fray, saying he’s staying focused on fundraising.

“I just think from a historical standpoint, if it’s just the two of us it would be very unique that two Costa Mesa residents are vying for the spot,” Moorlach said of himself and Foley, noting they ran against each other in the March primary for his state Senate seat.

In that election, Foley lost to Moorlach and Democrat Dave Min, who later went on to defeat Moorlach in the runoff in the November general election.

A special election for the 2nd District seat is expected early next year to replace Michelle Steel, who was elected to Congress last month.

The selection comes as the county finds itself at a crossroads on how to manage a fiscal crisis during the pandemic with sales tax revenues plummeting just as health and human services needs have arisen sharply.

The voter registration breakdown is 38% Republican, 33% Democrat and 29% with no party preference or members of smaller parties.

Depending on the special election’s outcome, the board will either continue to have a 4-1 GOP majority or could switch to a much more competitive 3-2 party margin split with Democrats having a second voice on the dais for the first time in recent memory.

The redistricting process is expected to get underway in the coming months, culminating with supervisors approving a final map of new districts by a mid-December 2021 deadline.