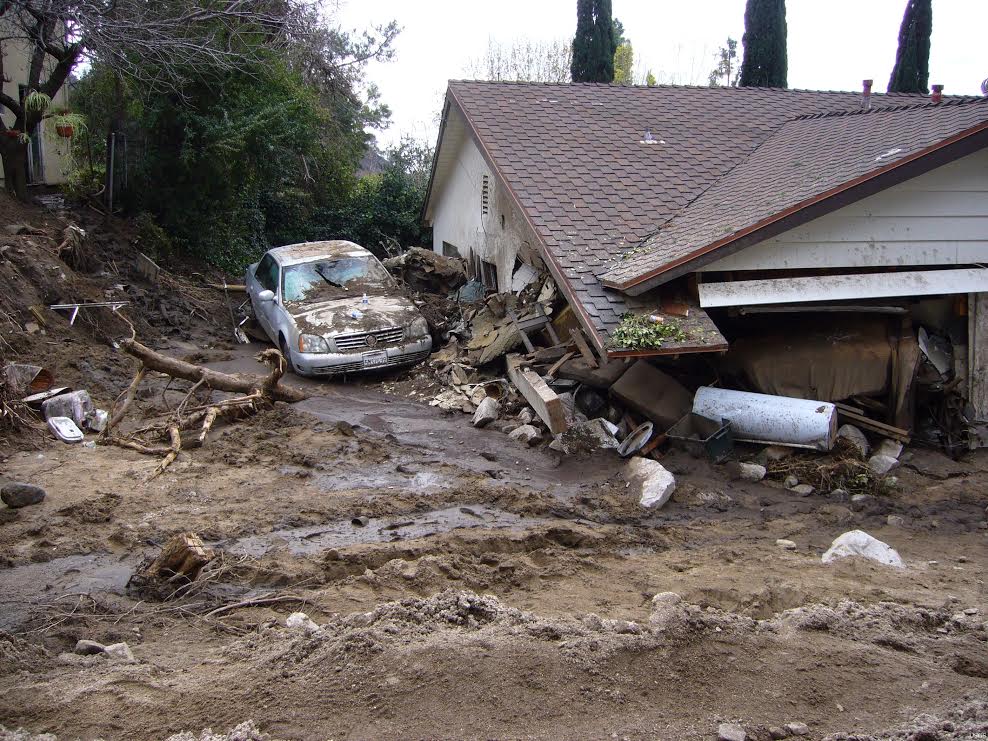 House damaged by debris flows generated in Mullally Canyon in response to a rainstorm on February 6, 2010. The drainage basin above this home was burned the previous summer by the Station Fire, the largest fire in the history of Los Angeles County. Credit: Susan Cannon, USGS. Public domain.

Waking up to what smells like a campfire, I walk to the open window to see the blood orange sun rising behind a wall of thick smoke.  First I’m met with shock, then disbelief—I live in Irvine, CA, a highly developed suburb with cookie-cutter homes that feels to be a far cry from the rural, forested areas where wildfires typically start.  For a moment I think the smoke could have been blown here by the Santa Ana winds from a large fire that’s been burning in the next county over, but then I receive a text from a friend that it is in fact a new fire—one just nine miles away.

I study wildfires and the impact they have on flood risk in southern California as a graduate student at the University of California, Irvine.  As a native of New York, when I first moved to Orange County in 2012 I assumed that earthquakes were the natural disaster people worried about most, but the last few years have pushed wildfires into the spotlight.  Seven of the ten largest wildfires in California history have happened in the last three years, according to Cal Fire.  Over the last three decades, the frequency and severity of large wildfires have been increasing in California and the western U.S. as a whole (Westerling et al., 2006).  What’s even more concerning to me is that studies show the frequency of extreme rain events is projected to increase in California by the end of the century as well (Swain et al., 2018).  Local efforts to develop resilience to wildfires and floods are urgently needed.

When wildfires burn hillslopes, they remove vegetation along with the root systems that act to stabilize the soil.  Winter storms following the fire often result in increased erosion due to the destabilized hillslopes as well as increased runoff (i.e. rainfall that turns into floodwaters as it drains off the hillslopes).  Sediment and other debris carried by the runoff can clog the flood control infrastructure that protects downstream communities, and if enough sediment and debris get swept into the flow, destructive debris flows can occur.  Disasters like the Montecito debris flows, which took 23 lives and destroyed 100 homes following the 2017 Thomas Fire in Ventura County, will become increasingly common if we don’t take a proactive approach to build our communities’ resilience to wildfires and floods (San Luis Obispo Tribune).

My research supports emergency planning for post-fire flooding and debris flows by developing more accurate models of post-fire erosion and flood risk in southern California and sharing the results with local flood control agencies.  These flood control agencies can use the modeling results to design flood control infrastructure that is better equipped to handle the increased sediment loads from burned mountain canyons or adjust how frequently the infrastructure is maintained.  These actions represent strategies to adapt to increasing post-fire flood risk, but more can be done to mitigate risk as well.

Climate change is making large wildfires and flood events more likely.  Meeting California’s ambitious climate and clean energy goals will help address the problem, but this can’t happen unless widespread action is taken at the city and county levels.  Since 2010, over 200 towns, cities, and counties in California have started their own Community Choice Energy (CCE) programs:  community-led programs in which local governments can purchase electricity from renewable energy sources on behalf of their residents and businesses, in place of their Investor-Owned Utility.  The local government then offers residents a choice of energy sources that includes a higher percentage of clean energy than does its Investor-Owned Utility, and at more competitive rates.  Not only do CCE programs increase consumer choice and local control over where the energy is coming from, they also provide a pathway for communities to adopt programs that increase their resilience to wildfires and power outages, such as solar-plus-storage.

Here in Orange County, the City of Irvine is working to establish such a program.  It plans to form a Joint Powers Authority with other cities in the county that would be able to establish electricity rates, increase reliance on renewable energy sources, and direct revenue toward community programs of their choice—all while the local utility, Southern California Edison, continues to distribute power.  The City of Fullerton has already voted to join Irvine in this effort, and the City of Costa Mesa initially approved it with a final vote scheduled for December 15, according to the OC Register.  Other cities in Orange County can join as well, even after the system is in place.  Residents who would like to have CCE in their community can lobby their city council to join by submitting public comments at city council meetings, contacting their city council members, or contacting local organizations like Climate Action Campaign.

The Silverado and Blue Ridge fires in October and now the Bond fire in December, which destroyed 31 buildings, serves as a stark reminder that climate change is happening here and now.  Local solutions that build communities’ resilience to wildfires while also transitioning them to cleaner energy sources already exist.  Now it is up to us to advocate for local action on climate change to protect our communities, our families, and our future generations.

Ariane Jong is a Ph.D. student in Civil & Environmental Engineering at UC Irvine.  When she is not studying the impact of wildfire on flood risk in southern California, she volunteers with the Citizens’ Climate Lobby and the Climate Reality Project.  Ariane lives in Irvine.