People waiting in line for assistance at St. Philip Benizi's food pantry run by its SVdP Society. About one quarter to a third of those helped are homeless.

Twenty five people living “without fixed abode,” that is homeless, died in Orange County in November.  Their names are:

As I wrote last month, there are signs of hope.  More shelters are being opened.  Yet, there are bottlenecks and IMHO problems.  The single biggest problem is that there remains a clear / desperate shortage of permanent homes / living situations to move along those who enter into the shelters.  This is not lost on anyone, and certainly not on those who are find themselves sleeping on our streets and are being asked to go into the shelters.

Further, as irritating as this must be to many readers, there remain true civil liberties questions, that almost none of us would put up with, with regards to freedom of movement for those who do choose to enter into the shelters.

Readers please look at the question honestly: Who of us would volunteer to go to a facility that one could not leave, except perhaps escorted once or twice a week, especially if one more-or-less knew that one was almost certainly to going to remain in that facility for six months with little hope of moving during that time into something better, and at the end of those six months will probably be “exited” back onto the streets again?  Yes, six months with a shower and heat, and in the better shelters access to TV / wifi, is probably better than sleeping out in the elements in a tent with a baseball bat (or perhaps “a strong man”) for protection.  But voluntary incarceration with an expulsion date, especially when one has been disappointed, again and again before, is a really tough sell and to little purpose.

There will probably be a change in Federal Administration, and the federal government is the only one that can provide the money needed to solve this problem.  Perhaps it is time to start, daily, sending pictures of our residents sleeping on our streets to those in Washington D.C. who would block assistance to them, noting of course, that this is a federal problem.  A fair number of those sleeping on our streets come originally from elsewhere, and yet, of course, no one wants to claim them now – “Don’t take this personally, but I don’t want to take care of you unless someone can prove that I’m absolutely responsible for you.”

Instead, let us all simply accept that these people, like the Okies of the 1930s are here, and not everyone who comes to California can be a Mark Zuckerberg or a Silvester Stallone though California has certainly benefited from arrivals to Hollywood and Silicon Valley.  Let everybody chip in now to take care of those who do come here and find … that they do need some help.   Given a chance, no one wants to be a burden. 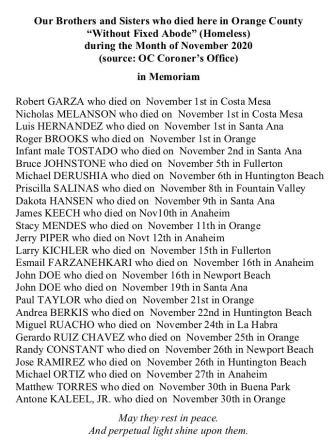