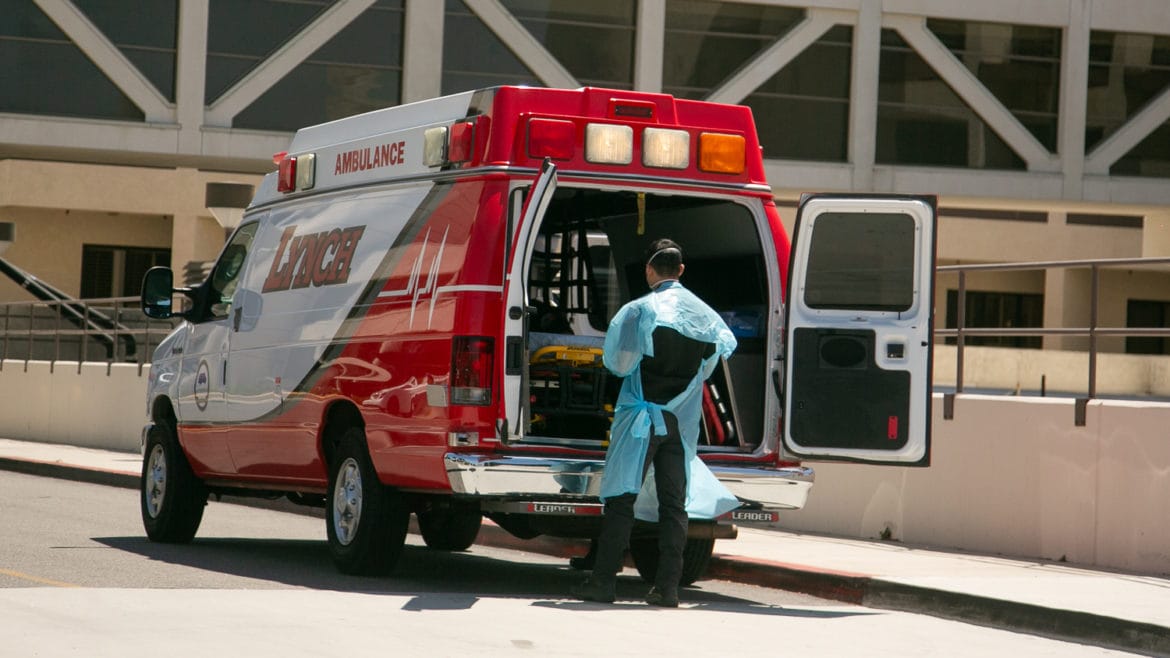 An ambulance parked in front of MemorialCare Orange Coast Medical Center in Fountain Valley on July 17, 2020.

Orange County’s hospitalizations and cases continue to spike, as a potential Southern California shutdown from Gov. Gavin Newsom looms in an effort to avoid hospitals from being maxed out.

The county’s hospitalizations increased by 230% during November and OC has averaged roughly 1,000 new virus cases a day for the past week. The positivity rate also more than doubled to over 8%.

Those trends are before a potential Thanksgiving spike, which has local public health experts and critical care doctors worried.

“We’re just going to see a continuation of the same trend we’re seeing … then after that we’re going to see an explosion, I would predict,” said UC Irvine epidemiologist and public health expert Andrew Noymer in a Friday phone interview.

He said a potential Christmas spike is too far out to forecast.

“What we see by Christmas time is anybody’s guess,” Noymer said. “It may be bad enough that people actually pay attention this time. It’s a little hard to say that the Thanksgiving explosion will be followed by a Christmas explosion.”

It’s unclear when a potential stay-home order could be announced, but during a Monday news conference Newsom hinted that could happen sometime this week.

“We’ll be seeing a lot more of you all this week. This is a dynamic week … I can assure you that we will be coming out with some additional information, additional recommendations in the very very near future,” Newsom said in response to a Fox 11 reporter’s question.

Meanwhile, more people continue to be hospitalized for the virus in Orange County.

As of Tuesday, 648 people were hospitalized, including 158 in intensive care units.

Hospitalizations skyrocketed last month, increasing from 183 to 605 people hospitalized by the end of the month.

Dr. Michael Katz, who treats virus patients in the intensive care unit at St. Jude’s Medical Center in Fullerton, said the peak of the second wave could be worse than in July.

“Right now it’s almost to the same level that we were at in July. By way of looking at the rates that it’s increasing, at this point I think it’s clear that it’s going to exceed where it was in July,” Katz said in a Tuesday phone interview.

There were over 700 people hospitalized at one point in July.

“Over the last three weeks or so, the amount of patients has basically tripled and it’s like 50% up since last week,” he said.

The increasing hospitalizations are beginning to strain some hospitals’ ability to care for heart surgery patients and other specialized care services.

“Right now we’re definitely seeing a significant increase in numbers. Thankfully it does seem to be less severe than when it first started in April. But the numbers are so much increased, that it’s still creating challenges for critical care in specialized areas of the hospital,” Keany said.

He also said this spike isn’t hitting as hard because hospitals have more resources and batter planning in place compared to the first wave.

We’re battle ready. We’ve done the drills, we’ve gotten all the equipment necessary, the space is organized. We’re upstaffing to the degree possible, but there was a nursing shortage before COVID, so that remains,” Keany said in a Tuesday phone interview.

But Keany, who’s also associate director of the emergency department, said the increases are beginning to take a toll on the already tired medical workers.

“Not only is it ongoing, it’s accelerating. It’s a little bit demoralizing for medical staff” to see such high influxes of hospitalizations, Keany said.

Both Katz and Keany said ICU and critical care doctors learned how to better treat patients during the first wave.

“Our death rates are going down because we are learning all the nuances of this particular new, novel virus and we’re learning how to treat it more efficiently and effectively,” Keany said. “We have new treatments. They’re not cures, but they reduce the severity.”

“This is not just a bad flu,” Keany said. “I’d say of the (coronavirus) patients I admit, I’d say 75% end up in the intensive care unit.”

Katz said they have different treatment strategies for certain phases of the disease and learned what was effective during the last wave.

“We had the ability to plan and gear up. So that’s a positive,” Katz said.

But the two doctors warn the public shouldn’t ease up on masking and avoiding large crowds because high case rates means more hospitalizations, which could impact routine care like diabetes treatments and care for other chronic illnesses.

The hospitals haven’t suspended non-COVID treatments, like they did in the first wave.

The two doctors have also seen people battling lingering effects from the virus.

Keany said some of the symptoms that stick around range from “lack of energy — they basically can’t even get through a normal day without excessive fatigue — all the way to long term neurologic problems. And the blood clot issue, once you have a blood clot in your lungs, you have to be on blood thinner anywhere from 6 months to a year.”

St. Jude’s created a special team to address the ongoing effects from the disease.

“So we have a post COVID recovery program to help people with a lot of these symptoms and it’s made up of a few specialized physicians and therapists,” Katz said.

“There’s a rehab specialist and also physical therapy, occupational therapy and a pulmonary doctor for the respiratory symptoms. I think that’s going to be necessary for a while because so many people are affected.”