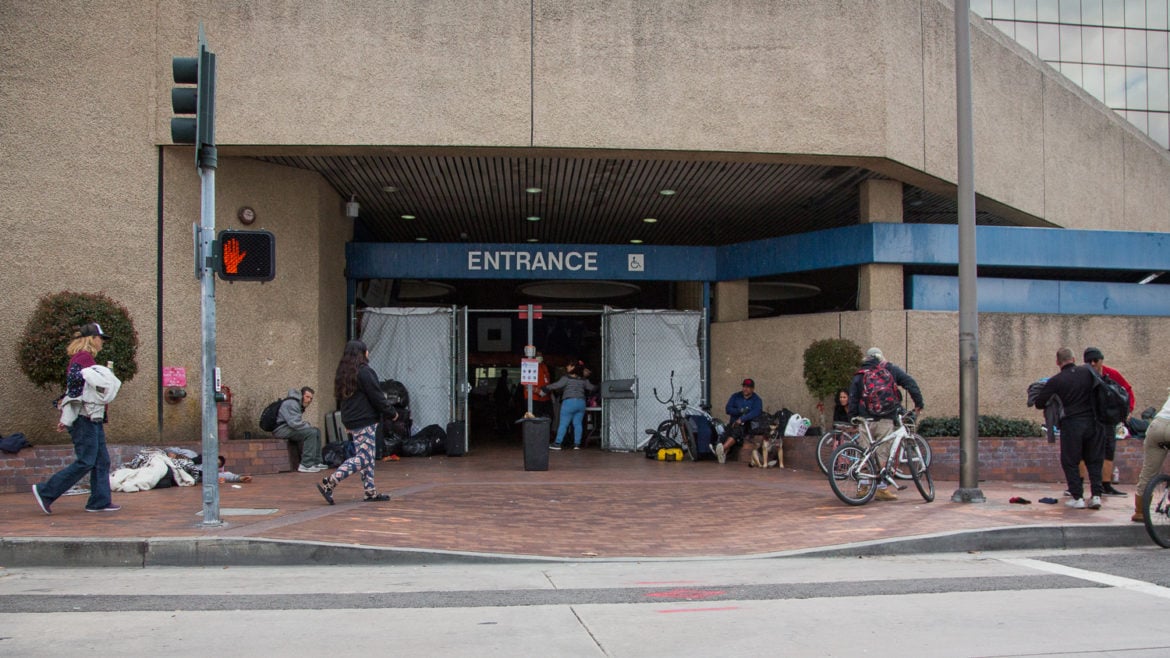 The Courtyard, a homeless shelter, in Santa Ana's Civic Center on March 18, 2020. It's unclear if outbreaks have happened at the shelter.

Refusing shelter can mean arrest for homeless people living out on some Orange County cities’ streets.

But a new lawsuit by civil rights activists argues something far worse awaits those, especially homeless women, who accept it: Sexual harassment, groping, and voyeurism by shelter staff.

“The reality is that homeless shelters are not a safe place to stay in the county,” said Minouche Kandel, an attorney for the American Civil Liberties Union (ACLU) of Southern California, after her group filed the lawsuit in Orange County Superior Court on Dec. 10. Read it here.

On top of these issues, the lawsuit alleges the facilities are rife with other inhumane conditions — such as overcrowding, filthy plumbing, rodent and bedbug infestations, showers in disrepair and extreme temperatures — echoing similar claims in an ACLU report from 2019.

The shelters identified in the lawsuit are Bridges at Kraemer Place and La Mesa in Anaheim, and the Courtyard in Santa Ana.

The lawsuit details the accounts of eight people, now plaintiffs, who were in and out of these shelters. Kandel described the legal action as a “follow-up” to the report, which was based on interviews with homeless people, staff members and volunteers at some of the same facilities.

The lawsuit names the three groups operating these shelters — Illumination Foundation, Midnight Mission, and Mercy House — as well as the City of Anaheim and the County of Orange.

Anaheim city spokesman Mike Lyster, in a written response to questions, said “our shelters are among the best in Orange County and provide a better option to life on the streets and a pathway out of homelessness.”

“We value resident well-being and dignity and hold our operators to high standards with a process for concerns to be heard and addressed. We have just become aware of what is being asserted, have not had a chance to fully review and cannot comment beyond that,” he said.

Cities like Santa Ana and Anaheim, and the county, used to be barred from arresting homeless people living out in public because they didn’t offer enough shelter to meet their homeless population.

But when those agencies under a 2019 federal lawsuit settlement committed to building and funding additional shelters, they regained their ability to arrest homeless people who refused to go when offered.

The dilemma homeless people now face in Orange County is either refusing shelter and risking arrest, or “going into shelters and enduring violations of your civil rights,” Kandel said. “It puts women and other residents who face violation in a horrible quandary.”

The lawsuit, which details the accounts of eight plaintiffs who claim to have stayed at these shelters, also alleges residents were retaliated against whenever they complained about staff behavior and violations like invasive searches.

“Residents who complain about these unlawful practices or dangerous conditions face retaliation, including loss of shelter access,” the lawsuit reads.

For example, one of the plaintiffs, Jordynne Lancaster, in the lawsuit alleges male staff at the Courtyard shelter in Santa Ana would start by hugging her and then progress to vulgar comments and groping.

Her accounts, detailed in the lawsuit, continue:

“Some staff members would slide their hands down her buttocks while they were hugging her. Some would intentionally get too close and rub up against her breasts when they passed by her in the shelter. Some staff members would, on a daily basis, say things like: “Fine ass, yeah. You know if you didn’t have your man…”

Lancaster, like the other plaintiffs, alleges she was retaliated against after speaking out.

“Here’s the big picture,” Kandel said. “The deplorable conditions are yet another reason why housing is the solution — not shelters — to homelessness.”