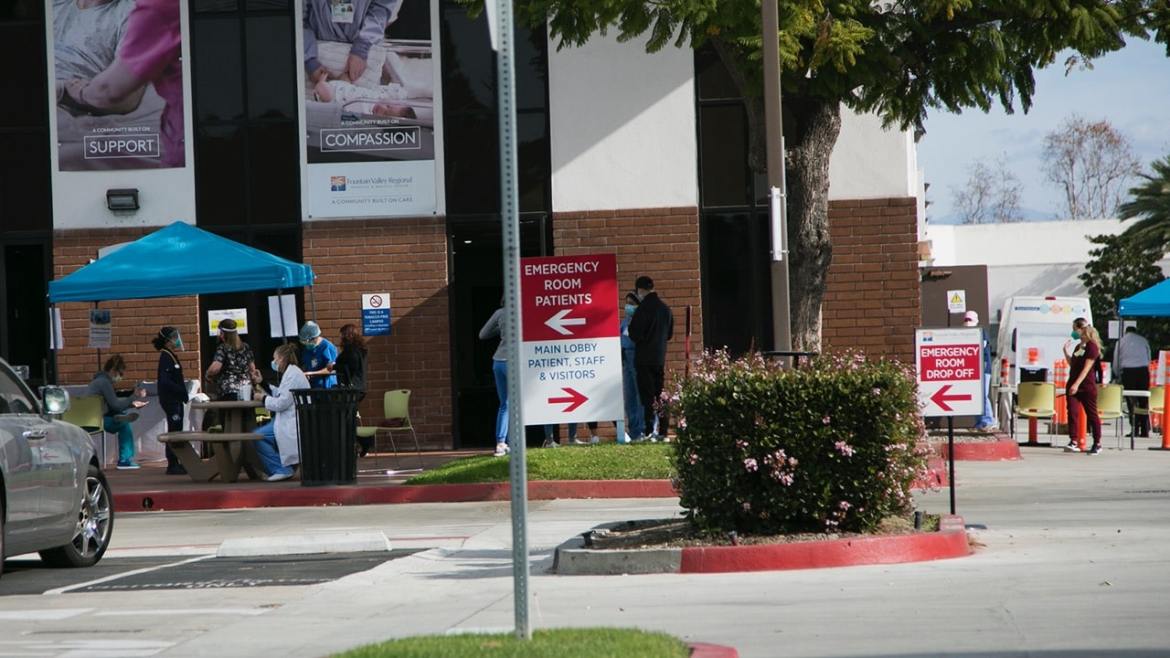 Orange County medical workers are under increasing stress as coronavirus patients flood hospitals across the county, while recent trends indicate the long feared holiday spike could be here.

More than two dozen were reported dead on Thursday, the latest update from county health care officials. Nearly 340 people have been killed by the virus over the past month.

Newly reported deaths can stretch back for weeks due to reporting delays.

“As an ER physician, I see people die every single day. The sheer numbers of people dying, it’s been hard. I think one of the harder things in this pandemic has been people that are dying and taking their last breath, most of the time, don’t have their loved ones or families holding their hand,” said Dr. Tanya Dall, who treats patients in the emergency room at Mission Hospital.

Dall said it’s “heartbreaking” patients are alone and she’s often there with them when they die.

“I’m the one that holds their hand and tells them that everything will be okay as they take their last breath.”

It’s a situation Dall and other medical staff face daily.

“It’s been heavy — it’s been heavy for everybody. It’s not like a terrible experience you have where you go home, go to sleep and wake up to a new day. It’s something you experience over and over,” Dall said.

At St. Joseph’s Hospital in Orange, Father Jack Sewell has been offering solace to patients and staff.

“I’ve gone with the families to the room of their loved one. And we stand outside the room and say the prayer,” Sewell said in a Thursday phone interview.  “We have what we call the Sacrament of the Sick.”

He said they comfort the sick and pray for people who are in critical condition.

“So it runs from a high to congratulate people leaving and beating COVID and other illnesses,” Sewell said. “To the sadness with families who lost their loved ones.”

The coronavirus is also spreading like wildfire in OC jails.

So far, the virus has killed one inmate.

“I think one of the more interesting things about the coronavirus is that we’re basically at war with an invisible enemy. You know it’s there in the community, but you can’t see it. And the thing that’s really scary about all of this is that people can be contagious sometimes for four or five days before they get symptoms, if they do get symptoms,” Dall said.

The virus isn’t just impacting the elderly or people with preexisting conditions.

And she’s seen numerous families have been testing positive in a recent trend stemming from holiday celebrations, she said.

“One thing I’ve noticed is it’s a lot of families,” Dall said. “I think a lot of spread is coming from family gatherings.”

As of Thursday, 2,251 people were hospitalized for the virus, including 502 in intensive care units.

Sewell said he’s been inspired by the “tenacity” of the nurses and doctors to keep supporting patients and staff through prayer and counseling during the worsening second wave.

He also said there’s a mutual support system for staff and patients at St. Joseph’s.

“A number of times when I’ve been called to the room and there’s no family there … I start the prayers and a number of nurses come over and silently bow their heads in the prayers. It’s really a mutual support in how we care for one another and how we care for patients,” Sewell said.

He also said the Sisters of St. Joseph have been baking thousands of individually wrapped cookies to give out to hospital staff, along with other food.

“I have never seen so much love from the community and response. They would send food,” Seidl said in a Wednesday phone interview, sounding choked up. “It is very humbling that the community is coming together to help us.

“There are sometimes 1- paramedic teams and gurneys lining the hallway, waiting to transfer the care of patients. When they do that, they’re not doing what they do best, which is being out there in the community,” Dall said.

She said could lead to longer 911 response times.

“It’s almost a ripple effect. When we back up, everybody else backs up. That means there’s going to be longer 911 response times because the EMTs are in the ERs.”

Spencer Custodio is a Voice of OC staff reporter. You can reach him at [email protected]. Follow him on Twitter @SpencerCustodio
What is COVID-19? Do I have it?