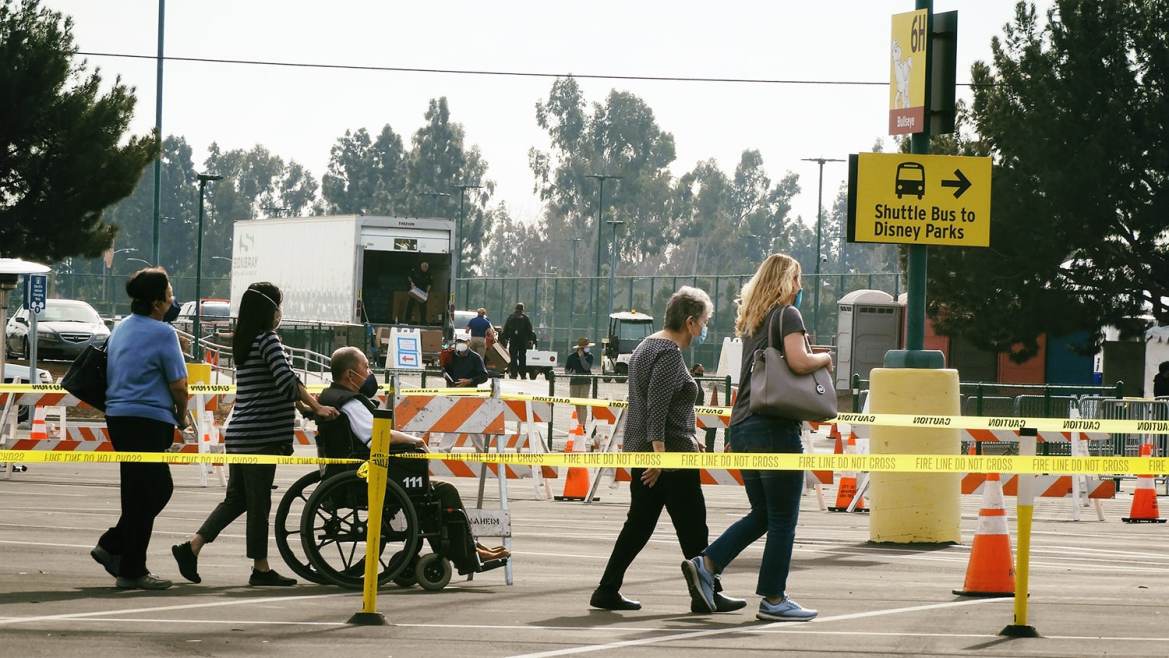 OC residents wait in line to get their coronavirus vaccinations at the Disneyland Super POD site. Jan. 13, 2021.

Orange County’s demand for the coronavirus vaccine is overloading the current registration system that allows people to schedule an appointment to be vaccinated, causing confusion and anger for some residents.

“The website isn’t user friendly whatsoever and I think it’s going to crash.You think in 2021 we could get our whatchamacallit together. We had a year to prepare for this,” JoAnn Arvizu said in a Thursday phone interview.

Arvizu, a 71-year old Huntington Beach resident, said she’s been trying to get an appointment for her 77-year old husband and herself since the website launched earlier this week.

“I know how to work a computer and yesterday it was asking us to sign in and give a password and they said you’re all set. And then you go to sign in and it said reset your password. That happened to my husband six times,” Arvizu said.

She expressed frustration at not being able to get some type of confirmation and at the apparent website errors.

“They didn’t even ask for an email address to notify you. You have to keep going on their website to find out if you have an appointment. Then it says schedule an appointment … you click on that and it says update your profile. Well I just put my profile information in there yesterday and you’re wanting me to update it?” Arvizu said.

Scores of elderly residents have voiced nearly identical concerns to Voice of OC all week.

Arvizu compared the situation to the famous Abbott and Costello baseball routine.

Othena, the website and application for registering people for the vaccination, has been overloaded this week, causing registration delays.

“We are experiencing exceptionally high volumes of traffic to our website at the moment,” the Othena website said Thursday morning.

By Thursday afternoon it was back up.

OC public health officials are trying to open up five vaccination supersites to distribute up to 40,000 vaccinations a day through an appointment basis — no walk ups allowed. Each site is expected to vaccinate up to 8,000 people a day.

The first one opened with a major public relations rollout at Disneyland this week, following county officials announcing on Tuesday they would begin vaccinating seniors 65 years and older.

Yet county officials weren’t seemingly ready for such a mass response.

“The volume of people trying to get an appointment is so high, that the system can be overloaded. As you know, the server can only handle so many calls and sometimes it crashes. Be patient. If it’s not available today, please try again in the future,” said Supervisors Chairman Andrew Do during a Wednesday news conference at Disneyland.

Do said they’re addressing the issue by trying to get more bandwidth to handle the large volume of registrations.

He also said the move to open the Disneyland supersite is an effort to prove to state officials that Orange County is capable of mass vaccinations so they can get more vaccines down the road.

“It’s part of the intent to show the state that Orange County has a mechanism and process in place in order to administer the vaccine in an efficient and timely manner,” Do said. “The state guides a lot of its action based upon the performance of the county. And with the vaccine effort, it’s no different.”

It’s unclear when the other four supersites will open.

Roughly 280,000 vaccines a week are needed to maximize all five supersites.

Orange County Medical Association President Dr. Jason Cord said while he understands the community’s frustration at not being able to register, at least it shows waves of people are ready to take the vaccine.

“We know that at the beginning, the Othena website, it’s going to be overloaded. We’re going to get through this — I recommend people keep checking … Every time it fills up, that’s a large group of people getting vaccinated. In some ways it’s encouraging to see that we have less hesitation and more enthusiasm about the vaccine,” Cord said in a Thursday phone interview.

“I have two parents 80 and over.  So I am helping them get on the app,” Cord said. “It’s challenging because we all know the website has been inundated.”

Vaccination clinics aimed at health care workers were shut down earlier this week because people without appointments flocked to them in hopes of getting vaccinated.

“The County’s three existing [vaccination] sites were overwhelmed by individuals without appointments today, effectively shutting down the vaccination sites. It is critical for people to understand that appointment slots are available based on vaccine availability. Showing up without an appointment stresses the system and depletes scarce resources,” county officials said in a Tuesday news release.

“This morning we just got informed by the state … we will get another 35,000 doses next week,” said county health officer Dr. Clayton Chau at the Wednesday news conference. “Every week we get an allocation.”

While people are anxiously awaiting the vaccine, virus deaths have been steadily climbing.

The virus has now killed 2,195 people out of 202,753 confirmed cases, including 16 new deaths reported today, according to the county Health Care Agency.

The agency has reported almost 300 new deaths since the year began.

Arvizu said the deaths have been hitting home as the virus has become so widespread.

“I’ve had friends pass away, unfortunately. It used to be someone way down the line you didn’t know,” she said.

Orange County is averaging roughly 3,500 new cases a day for the past week.

Throughout the week, Chau repeatedly said the decision to include people 65 and older in the first round of vaccinations is an effort to keep them from becoming hospitalized.

On Tuesday, Chau told county Supervisors that a little more than half of all OC’s hospitalizations are people 65 and older.

Cord said he supports the move.