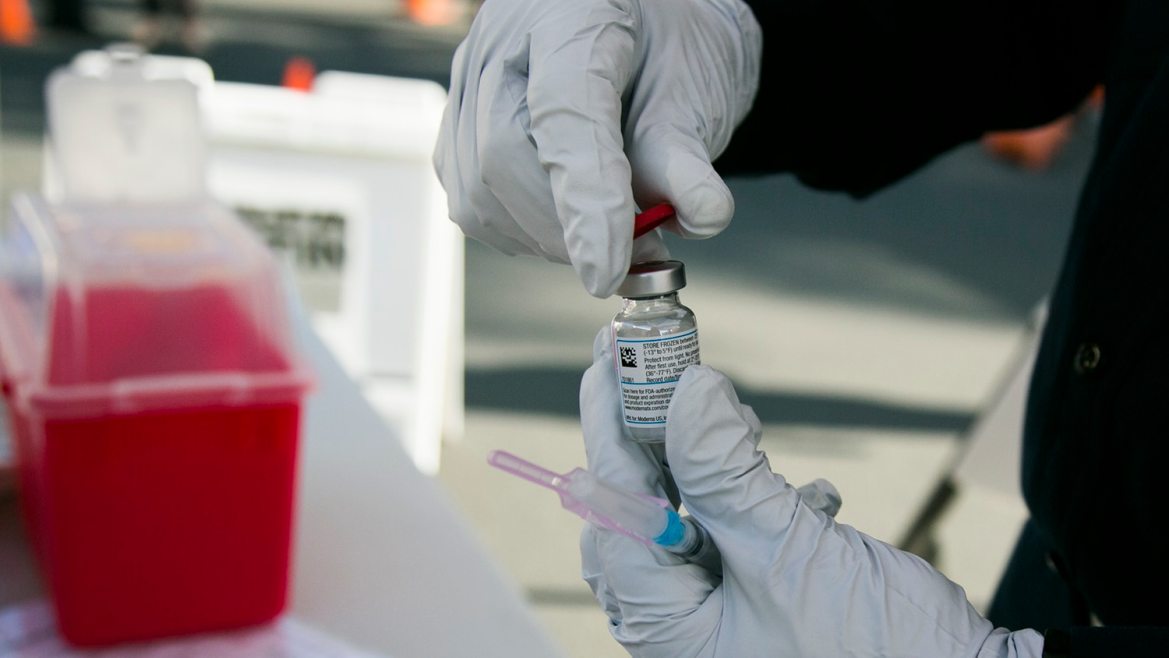 A worker prepares to vaccinate someone with the coronavirus vaccine at Orange County Fire Authority headquarters in Irvine. Jan. 8, 2021.

Orange County health experts are mounting their own ground-level efforts to educate people on the Coronavirus vaccine’s science, safety and effectiveness, while also encouraging them to get vaccinated at the first opportunity.

The effort comes as a host of questions swirl around County of Orange strategies for making sure people can actually get the vaccine — especially in underserved and low-income communities.

Latinos make up the most Coronavirus infections in the county but are left far behind in terms of vaccinations, according to county data available as of Thursday.

A vaccination site is set to open tomorrow at Santa Ana’s Valley High School, according to the Santa Ana Unified School District.

Yet county officials offered few details when asked about it Thursday, one day before it was set to open. There also hasn’t been any specific announcement on the site across the county’s social media channels.

When a Voice of OC photographer asked for media access to the Valley High site Thursday, county spokeswoman Molly Nichelson said the county wasn’t providing media access “at this time.”

Asked later by a reporter over text message when more information about the site would become available, Nichelson said: “When we announce it.”

It’s a contrast to the county’s unveiling of their vaccination POD site at Disneyland in Anaheim earlier this year — which county officials christened with a whole media day and publicity campaign and sent videos of the event to reporters.

Most of the known details on the Valley High site came straight from school district officials, who announced online that they would be hosting several vaccination sites over the next several days, starting with Valley High.

“My opinion, and this is my opinion, is that Santa Ana has been treated like a stepchild. Why wasn’t the city a priority from the beginning?” Amezcua said. “We could have avoided so many deaths.”

Amezcua said the Valley High site comes thanks to a set of meetings between local leaders from the community health clinics, cities of Anaheim and Santa Ana, and the school district — all of whom raised the issue of equity to the county and asked for more vaccines.

“It took this group that (Dr. America Bracho of Latino Health Access) brought together to say, ‘Look at the equity issues we’re dealing with. Our community is dying. What can we do about it?’” Amezcua said.

“I don’t believe the Board of Supervisors have done enough, and they’re not willing to admit that either,” Amezcua added.

Amezcua said the school district locations are optimal as vaccination sites because schools “are a trusted presence in our communities.”

“It only makes sense to use our school sites. If we open vaccine sites, people will come because they trust us,” Amezcua said.

Meanwhile medical researchers and experts at the University of California, Irvine (UCI) sent several clear messages to the public at a Thursday educational panel on the vaccine.

Experts say data and studies around the vaccine’s safety and effectiveness are “promising” but there’s still a need for people to socially distance and mask up even after getting vaccinated. They add that everyone should get vaccinated at their earliest opportunity.

And with the threat of new Covid-19 variant strains, UCI’s Founding Associate Dean of Research Rob Spitale said there’s “a lot of very promising data that the current vaccines … are still quite effective against the mutant viruses that  have been emerging around the world, including in the U.S.”

“In fact there was a recent paper published … detailing how the responses are in some cases indistinguishable in their efficacy,” Spitale said. Though data and more information is still being gathered.

Chan said there have been “no significant safety concerns identified in the (vaccine’s) clinical trials.”

Yes, he said, there is a potential for some people to experience anaphylactic allergic reactions to the vaccine, though Chan said the risk is low and applies to a “very, very small” portion of the population. He advised people with a history of such allergic reactions to consult their doctors.

Panelists advised people not to take medication with acetaminophen and ibuprofen before receiving the vaccine. Chan said that way, people would be more able to if they feel side effects of the vaccine like headaches, which he said are “good signs” that the body is mounting an immune response.

“If very few people want to receive these vaccines, we’ll move through the (vaccine priority) phases more quickly but will end up with a lower percentage of our population vaccinated,” said Hurley-Kim during the panel.

Those currently prioritized for the vaccine include health care, pharmacy and dental workers — as well as those in community health clinics and emergency service workers such as police officers and firefighters in areas most impacted by the virus like Anaheim and Santa Ana.

Click here for more information about what groups are currently next in line.

Meanwhile there are outstanding concerns over the County of Orange vaccination progress and strategy, stemming from a number of factors:

For weeks there were problems with the county’s Othena app, which was designed to help people make vaccine appointments. County officials gave it a publicized rollout only to find the app beset by technical glitches.

Latinos in the county still account for the largest portion of virus infections while comprising a small slice of those vaccinated so far, according to county data.

Storage issues at the county’s vaccination site at Soka University disrupted operations for a time, with many people complaining in waves on Twitter that their appointments were rescheduled.

County officials have publicly said no appointments were affected.

And data continues to vary significantly on the county’s vaccination progress.

The county’s own dashboard puts it behind other counties like San Diego at under 300,000 vaccinated.

Officials this week have said the number is larger than that.

The state says that number is actually more than 438,000, and on its own dashboard puts Orange County in third place in terms of counties that have administered the most doses, behind Los Angeles and San Diego counties.

Here in Orange County — as of Thursday — the number of people reported in the hospital with the virus has gone down, now at 965 hospitalizations.

For context, Orange County has averaged around 20,000 deaths from other causes a year since 2016, including  543 annual flu deaths, according to state health data.