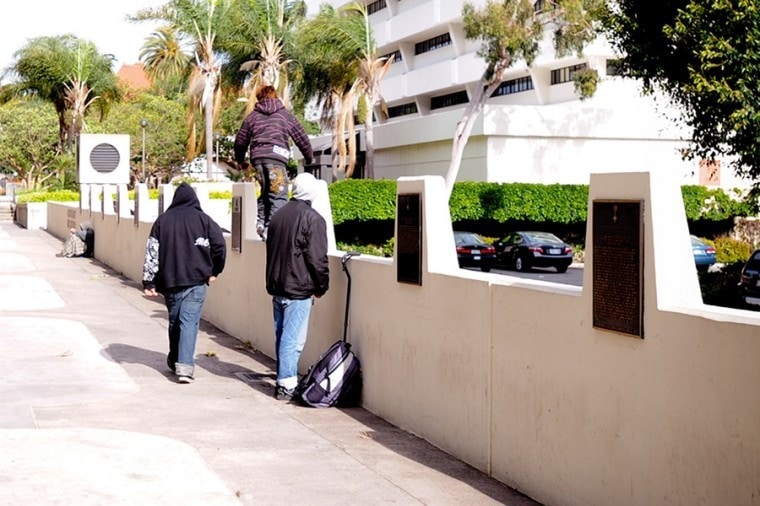 The scene at Orange County's Walk of Honor veteran's memorial on a recent afternoon. (Photo by: Violeta Vaqueiro)

As we’ve detailed in recent stories, there are two large memorials to veterans and police officers at Santa Ana’s downtown civic center that are dirty, regularly vandalized and even urinated on.

One of the main reasons for the bad upkeep, officials say, is that the county’s Walk of Honor and its officers’ memorial are situated right next to where the county’s homeless have largely camped and been fed for years.

That connection isn’t lost on Deane Tate, whose been working for decades with a Santa Ana-based non-profit that helps homeless veterans, called Veterans First.

Tate walks past the Walk of Honor often. And she says it’s bad condition tells the real story of how our society remembers it’s fallen.

“That’s exactly what they think of vets — they honor them with a wall they don’t take care of,” said Tate of the civic center memorial.

“But they treat the wall better than the veterans on the streets. And look at that wall. If they don’t take the time to maintain that wall, what do you think they do about the veterans?”

Tate estimates that veterans make up more than half of Orange County’s homeless population. In many cases, they are Vietnam veterans still trying to cope with the bad reception they were given so many decades ago.

Tate has been working since 1993 to change that as CEO of Veterans First. Her group tries to get veterans off the streets and into transitional housing situations so they can heal up and eventually find work. She estimates that veterans make up half of Orange County’s homeless population.

But Tate said too often local cities don’t want to help. There’s more funding than ever these days, she said, from the federal, county and state coffers to help veterans.

But there’s not the political will among political leaders in Orange County’s cities to change local general zoning plans to allow for transitional housing for homeless people, including homeless veterans.

“Nobody wants an emergency shelter for veterans,” Tate said, noting that she runs into the not-in-my-backyard factor as she tries to put together residential properties to serve as transitional housing.

“You can have all the funding you want but if you don’t have anywhere to put (housing), it doesn’t do you any good,” Tate said.

Although a state law enacted a few years ago calls on cities to address transitional housing, it’s been slow going. Most cities are still studying the issue of zoning, Tate said.

To date, only four out of Orange County’s 34 cities have worked to provide such transitional housing opportunities are Anaheim, Santa Ana, Garden Grove and most recently, San Clemente, Tate said.

Her non-profit current operates seven houses in the county that offer homeless veterans transitional housing with two in Santa Ana, three in Anaheim and two in Garden Grove. In all, she has about 84 transitional beds, with another 22 slated for permanently disabled veterans.

Yet with more than 3,500 homeless veterans, Tate said there’s many more properties needed.

“It’s very hard for people to go from the street to get a job. They have to transition. Take a shower, a meal and take a breath,” she said. “So many of these guys have been out there so long, they’re dealing with a lot of emotional problems.”

Tate said she hopes that Orange County remembers Memorial Day all year long. And hopefully next year, memorials to our fallen heroes won’t be in such bad shape. And our heroes who are still with us — but down and out — can get the help they need to get back up.

“They don’t deserve to be on the streets,” Tate said. “Not for what they sacrificed.”

Please contact Norberto Santana directly at [email protected] And add your voice with a letter to the editor.