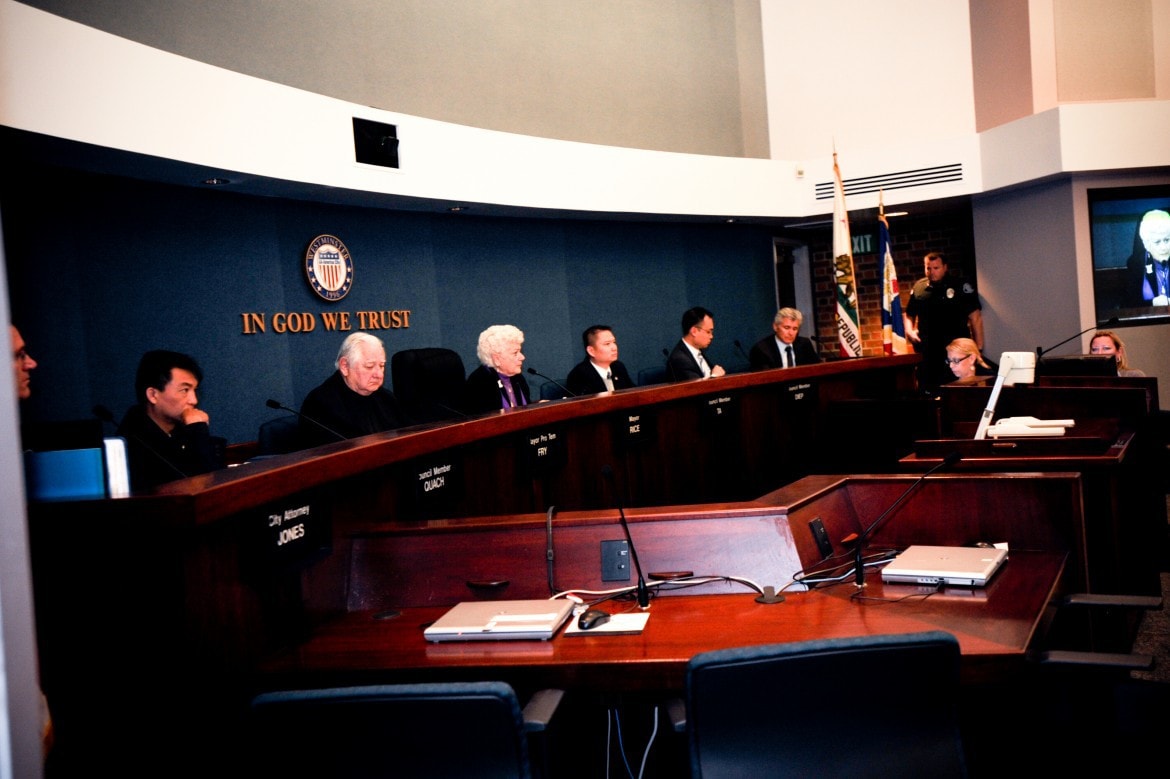 A Westminster City Council meeting last month. Council members Tri Ta, Andy Quach and Tyler Diep were accused of violating the Brown Act following revelations that they discussed their votes on an issue before the issue was aired at this meeting.

Monday, July 12, 2010 | The Orange County District Attorney has concluded that a letter (a translated version is attached to this article) sent in April to several Vietnamese language newspapers, co-signed by three of the five members of the Westminster City Council and concerning a conflict among competing permit-seekers, is not evidence of an unannounced discussion among the trio that would violate the Ralph M. Brown Act.

This letter was not discussed at any open or announced gathering of the three council members who obviously authorized it as reflecting their views — and who signed it. It was the result of either a physical congregation of the three, or a serial meeting.

And yet the response of Raymond S. Armstrong, senior deputy district attorney heading the Special Prosecutions Unit, to the complaint by Chris Prevatt, editor of The Liberal OC, was as follows:

There is no evidence to sustain a civil action for multiple reasons. First, the sending of the letter itself does not demonstrate that a majority of the members of the council agreed to any decision on the matter, or even discussed it, at any time other than at the publicly held city council meeting referred to above.

Our inquiry did not reveal any evidence to the contrary. The letter simply reiterated the sentiment of the Westminster Council expressed at the public meeting. Second, the sending of the letter did not constitute “action taken,” because it did not signify a “collective commitment or promise by a majority of the members of a legislative body to make a positive or a negative decision.”

It only requested community members themselves to attempt resolving their differences. Third, even assuming the act of sending a letter constituted “action” as defined above, given the specific nature of the conflict the letter sought to resolve, there is no evidence or threat that it is likely to reoccur in the future.

If the letter had begun with “Speaking for myself and, I am confident, on behalf of a majority of the council, given statements at the last public meeting …” then there would be no Brown Act issue.

But the translation I have seen, using “we” and “our” throughout and signed by three of the five council members, seems unmistakably to reflect a private discussion among a majority in which all named consented to their names being used as signatories to the letter and its particular contents.

But the district attorney’s office seems to believe that if a local body secretly discusses and authorizes a message to someone reflecting its consensus on a policy matter, the Brown Act is not violated unless that consensus deviates from sentiments expressed in a prior public meeting, or commits the majority to a particular decision having legal force. There is no legal authority whatsoever even remotely approaching that forgiving principle.

It is the mere discussion of policy matters among a majority, whatever the history or outcome, that triggers the Brown Act’s openness rules. And if the district attorney’s view were the law, it would be a serious erosion of the Brown Act, since the public’s ability to determine that the message is purely a reiteration of a known policy position would arise only upon public discovery of the message, an outcome which would in many cases be subject to the authors’ control.

In this instance, for example, although the letter was not otherwise announced and was directed only to Vietnamese language newspapers, the authors probably realized that its existence would at least eventually become generally known.

But if the letter had been directed instead to a common political campaign contributor, assuring him that the majority’s stated preliminary consensus at a recent meeting would be reversed at the final decision point, or had it been a message on any topic addressed to any party certain to keep it confidential, any analysis of the content of the message — by a district attorney, a court or the general public — would be out of the question.

That is why the district attorney’s conclusion that a privately and jointly authorized letter of this kind is fair game if its content is “old news” is disturbing.

It sends a “catch me if you can” signal to councils, boards and commissions throughout the county that backstage letters signed by a body’s majority will be presumed lawful as a means of communication with interested figures in, or segments of, the community or elsewhere, and that the burden to prove otherwise rests with those who may or may not ever become aware of their having been sent.

The district attorney in this instance has the authority to file a declaratory judgment action in Superior Court to determine whether this incident violated the Brown Act. Despite the statements in the quoted portion of the response above, “evidence or (a) threat that it is likely to reoccur in the future” is not required to seek such a judgment.

The very fact that the city contends that the letter was lawful is sufficient cause to find a controversy meriting judicial determination. Sufficient, that is, unless the sole public officer empowered to enforce the Brown Act in court — relieving individual citizens of the cost and difficulty of doing so — continues his office’s tradition of finding no reason to use such power.

Terry Francke is Voice of OC’s open government consultant. On a regular basis Francke offers his legal opinion of Brown Act issues as they crop up in Orange County. Please contact Terry Francke directly at terry@calaware.org. And add your voice with a letter to the editor.