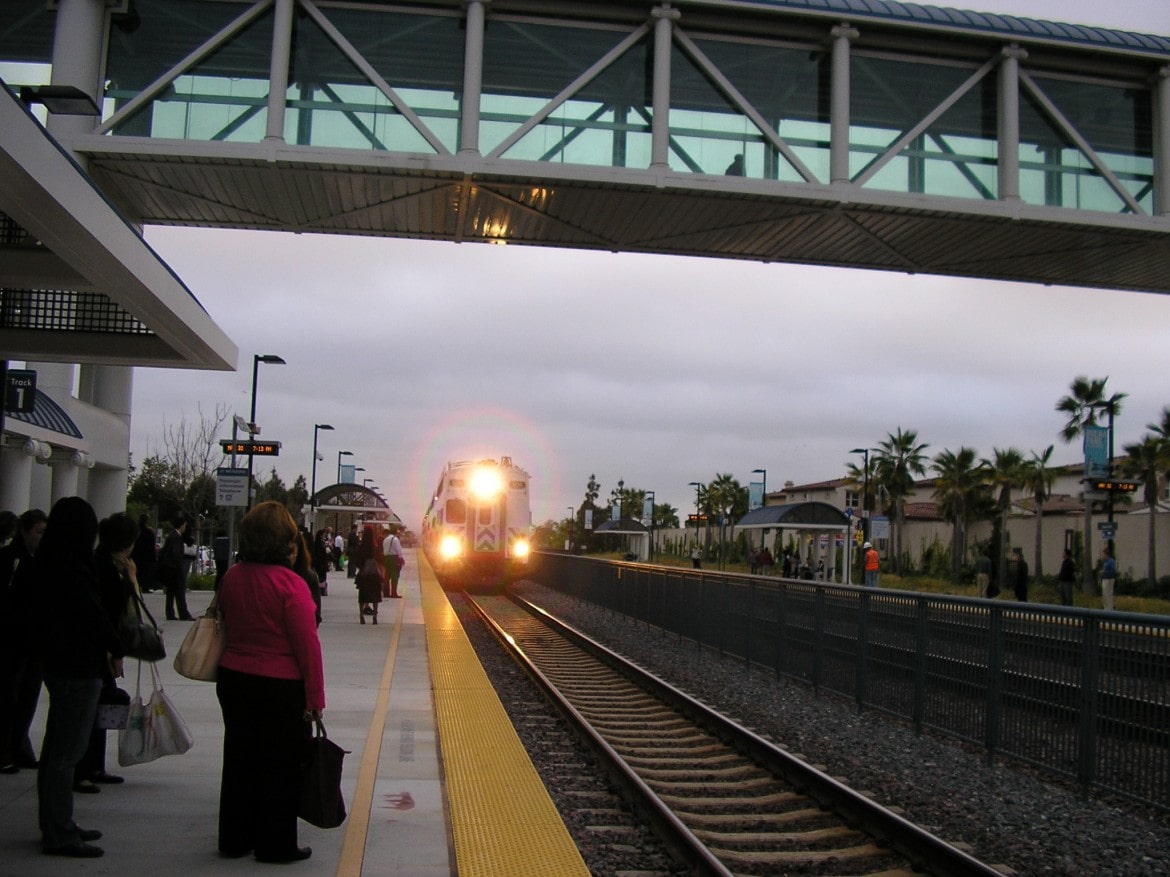 Commuters headed to L.A. watch the arrival of a 7:10 a.m. Metrolink train in Buena Park. The station may be torn down to make room for high-speed rail.

Thursday, May 12, 2011 | The California Legislative Analyst’s Office is urging the state Legislature to take control of the planned $43 billion high-speed rail project away from the nine-member board that’s currently overseeing construction of the system.

Responsibility for the Anaheim-to-San Francisco project should be quickly transferred to the California Department of Transportation because it “needs the accountability and oversight that comes with a department,” said analyst Eric Thronson Wednesday at a hearing of the state Senate Select Committee on High-Speed Rail.

The High-Speed Rail Authority, he said, has been acting as “a study and promotion organization.”

Thronson was echoing the findings of a 28-page report that the non-partisan office released Tuesday.

In its report, the Legislative Analyst’s office said: “We recommend that the Legislature remove decision-making authority over the high-speed rail project from the HSRA board to ensure that the state’s overall interests, including state fiscal concerns, are fully taken into account as the project is developed.”

It is the most recent rebuke of the Rail Authority, which has been sharply criticized over the past year on issues ranging from lax oversight of contractors to faulty ridership studies.

But senators on the committee were not buying van Ark’s brush off of the findings.

Sen. Michael Rubio (D-Bakersfield) told van Ark the Legislative Analyst’s Office “clearly have said they have lost confidence in you and your organization. You can’t get a more damning statement.”

The switch to CalTrans management was just one of several major changes recommended for the California High-Speed Rail Authority by the Analyst’s Office and in a separate report from the Authority’s Peer Review Group.

In its report, the Analyst urged the Legislature to cut the rail authority’s budget request for the 2011-2012 fiscal year to just $7 million to cover administrative expenses. The rail authority is seeking $185 million for consultants to perform project management, public outreach and other work.

It also said the $43 billion estimate for what is will cost to build the train system is “outdated.”

“Based on our analysis,” the analyst’s report said, “the high-speed rail project is likely to cost much more than the $43 billion originally estimated by HSRA for the first phase from San Francisco to Anaheim.”

It said the cost of the leg between Fresno-to-Bakersfield, which currently is where construction is scheduled to begin, is now $4.5 billion, “which is 57 percent greater than was assumed in the original plan.”

The Analyst’s Office also strongly recommended the state get permission from the Federal Rail Administration for financial flexibility in spending about $3 billion it has received so far. And if it can’t get that permission, construction on the project should be halted, the Analyst’s Office said.

The critique was particularly significant because the Legislature frequently depends on the nonpartisan office for advice when making decisions. If lawmakers follow the recommendations, it could limit the amount of state money spent on the project in the near future as well as potentially change where work begins and when.

One major point in this week’s Analyst’s report was a concern that under its current plans, the Rail Authority may start construction on a project it won’t have the money to finish.

The planned rail system is highly dependent on federal funds and budget shortages and Republican opposition in the GOP-controlled House of Representatives could block federal grants.

Rail officials have argued they were forced to move quickly because of federal requirements on more than $3 billion granted to California. But many of the problems, including poor community outreach, were put in place by Rail Authority executives months before anyone knew federal funds might be available.

They also have maintained they need more state staff to competently oversee the work of outside contractors.

The analyst also said the Legislature soon will be asked to make “critical multi-billion dollar decisions about the project,” but lacks the information to make those decisions.

“It is clear to us,” said the Peer Review Group report, “that the current Authority staff resources are not at all adequate for the job at hand and we conclude that …the Authority is only going to fall further and further behind, especially as construction commences.”

The Peer Review Group said it will support efforts for the rail authority to add more staff. “We cannot overstress the importance of this issue: the system is broken, and it needs fixing.”

Van Ark said talks with the governor’s office have resulted in the ability to fill a few more positions.

At a Wednesday’s hearing, the Peer Review Group chairman, Will Kempton, said “we are pleased with some of the progress that is being made, but more needs to be done.”

Kempton, who also is the chief executive of the Orange County Transportation Authority, said it was very important for the project to develop a business model that spells out how the project will work.