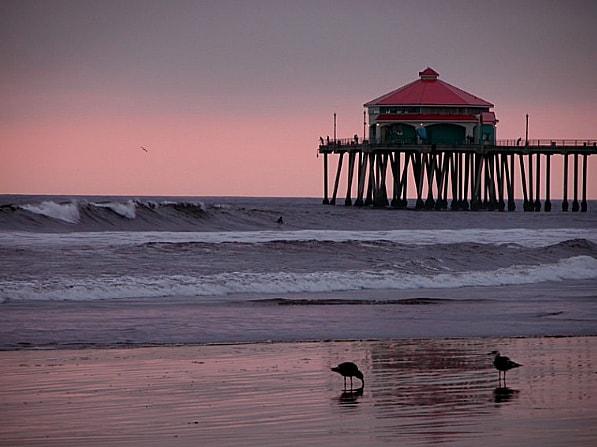 In the latest step of a years-long attempt by Poseidon Resources to obtain environmental approvals for its proposed desalination plant in Huntington Beach, the company will go before the Santa Ana Regional Water Quality Control Board Friday for a permit that would allow the plant to draw water directly from the ocean.

The proposal has drawn the ire of environmental groups, who say industrial-scale ocean intakes kill large swaths of marine life — including smaller organisms that form the base of the ocean food chain — and that approval of the permit would undermine a state policy seeking to minimize harmful effects from the intakes.

“Its not only undermining the policy, it’s exacerbating the problem the policy was trying to address,” said Joe Geever, a water policy manager for the Surfrider Foundation.

A spokesman for the proposed plant countered that less than one pound of sea life per day would be killed by the intake’s screen — the equivalent, he said, of what a brown pelican eats in a day — and that the state policy limits only power plant uses of ocean water intakes.

“The policy has nothing to do with desalination facilities,” said Brian Lochrie, a project spokesman.

For more than a decade, the Connecticut-based Poseidon Resources has been seeking to build two large-scale desalination facilities along the Southern California coast, one in Huntington Beach and another in Carlsbad. The plants would convert seawater into drinking water, which the company plans on selling to local water agencies.

While other countries have large seawater desalination facilities, the idea has generated controversy in the United States, where environmental groups assert that the method should only be used as a last resort.

There is only one large-scale plant in operation in the nation — the troubled Tampa Bay Desalination Plant, which was originally codeveloped by Poseidon. The local water agency later took over the facility, which ended up with multiple design flaws and required millions to be spent on repairs.

If built, the Huntington Beach and Carlsbad facilities would be the largest desalination plants in the Western Hemisphere. Supporters say the Huntington Beach plant would create jobs and produce a local, reliable water supply for southern Orange County, which now relies on imported water from Northern California and the Colorado River.

Lochrie said the cost of imported water has risen from about $500 per acre-foot five years ago to $800 today. Water agencies would be able to count on a fixed price for desalinated water, he said. An acre-foot is roughly the amount of water two three-person households use in a year.

He added that the plant could provide 8 percent of the county’s water supply. “It’s an opportunity to diversify Orange County’s water portfolio,” Lochrie said.

Conner Everts, a representative from the Desal Response Group, said that over the years, Poseidon has greatly increased its rate estimate for the Carlsbad plant, which is much further along in the process than the Huntington Beach project. He said the cost has risen from $705 an acre-foot when the project was first pitched to the city, to $1,650 today.

“It really creates water as a high-priced commodity from a private company,” said Everts. “It doesn’t make sense on any level.”

Lochrie attributed the rising cost projections to lawsuits filed by environmental groups as well as their appeals of the project’s permits.

At Friday’s meeting, Poseidon will seek a renewal of its pollutant discharge permit, which includes a change to allow the plant to draw water directly from the ocean. The new approach is a byproduct of a recent statewide policy on ocean intakes.

Poseidon originally planned for the Huntington Beach facility to use water from the adjacent AES power plant, which draws large amounts of ocean water to cool its generators before pumping it back out to sea, a process called once-through cooling.

But last May, the State Water Resources Control Board found that withdrawal of seawater for once-through cooling kills or injures “marine life to the detriment of the marine environment.”

So the board adopted a policy known as the OTC Plan that effectively eliminates the method by setting a schedule for coastal power plants to reduce the rate of water coming into their intakes by at least 93 percent.

In response, Poseidon revised its proposal so the desalination facility would draw water directly from the intake, bypassing the power plant. The company says that under this scenario, the new limitations don’t apply.

Lochrie said that the state policy only applies to power plant uses of intakes and that Poseidon was planning to draw far less water than the AES plant — 127 million gallons per day instead of the 514 million that AES is permitted.

“The amount of energy and power needed to draw in that seawater is less,” said Lochrie. “You’re talking about apples and oranges.”

But environmentalists say that allowing Poseidon to draw in a large amount of water defeats the policy’s purpose of reducing harm to the marine ecosystem.

That “completely undermines the policy on cooling water intakes,” he added.

Beyond Friday’s decision, the project faces several challenges before ground can be broken.

If the regional board approves Poseidon’s discharge permit, environmental groups could appeal the decision to the State Water Resources Control Board. Poseidon also must get approval from the California Coastal Commission, which will also review an appeal of Huntington Beach’s permit.

The company plans to seek 30-year water purchase agreements with local water agencies, Lochrie said. After the agreements are in order, Poseidon will raise funds for construction.

The public hearing on the pollutant discharge permit will be on Friday, Dec, 9, during the 9 a.m. meeting of the Santa Ana Regional Water Quality Control Board at 25541 Barton Road in Loma Linda.

You can reach Nick Gerda directly at ngerda@gmail.com