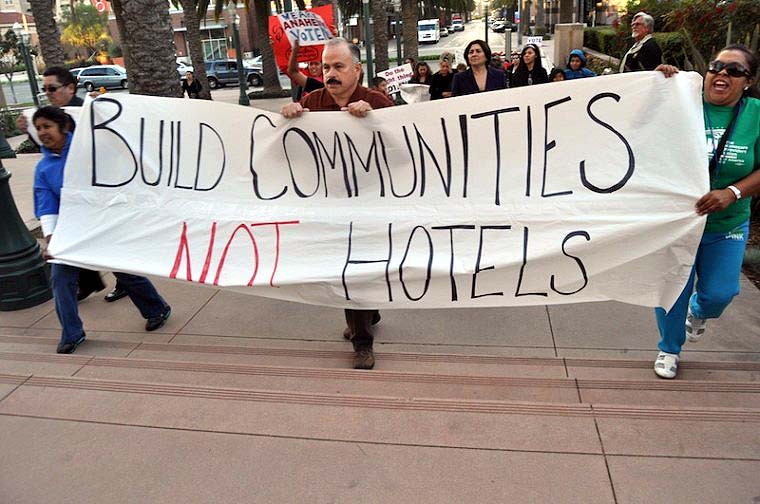 A special City Council meeting to reconsider a controversial $158-million hotel subsidy was thwarted Tuesday when council members who backed the subsidy did not attend. Instead, the meeting became an impromptu town hall where scores of residents vented their anger.

Mayor Tom Tait called the special meeting on Monday with hopes that the council would rescind the vote made last week. But the three council members who support the subsidy — Harry Sidhu, Gail Eastman and Kris Murray — notified City Hall that they wouldn’t attend the meeting.

However, Tait and Councilwoman Lorri Galloway, who voted against the subsidy, attended and were joined by more than 80 residents and stakeholders.

“We’re very proud of both of you. We stand tall with you,” Amin David, a longtime Latino activist in the city, told Tait and Galloway.

The subsidy plan allows a group headed by William O’Connell and Ajesh Patel to develop two four-star hotels in the city’s GardenWalk center and keep up to 80 percent of the hotels’ room-tax revenue for the first 15 years after opening.

With its proposed contribution, the city would in effect pay more than 25 percent of the project’s construction costs and investors in the project would realize a nearly 16 percent rate of return, according to a staff report. The city staff recommended that council members reject the subsidy.

Tait had scheduled the special council meeting, he said, because he wanted council members to have the final say on the agreement, which the city manager is to execute by Wednesday.

He also said he wanted to give residents the opportunity to be heard. Many residents complained that last week’s Council meeting agenda was misleading and said they didn’t know the subsidy plan was up for a vote.

Galloway suggested that the city reopen negotiations and obtain additional community benefits from the developer. She descibed the subsidy as the largest hotel tax giveaway “in the history of the world.”

Tait agreed and said that if the developer would agree, the possibility of new contract provisions provided a “window of opportunity.”

Residents expressed their bitterness over the subsidy, which comes in the wake of many city services being cut.

“The city has no money for these projects, but you’re making the rich people even richer,” said Luz Rosales, a resident of a low-income neighborhood that has been waiting for a small community park and has been denied access to a public library because of budget cuts.

The prevailing question from residents was the whereabouts of Sidhu, Eastman and Murray. Residents shouted “where are you” throughout the meeting and suspected that the council members didn’t show because they didn’t want to face the residents.

Murray declined to answer that question when approached by a Voice of OC reporter earlier Tuesday. “I’m not going to answer any questions,” she said.

Eastman had said she had a previous commitment, but didn’t elaborate. “Nobody consulted me about any meeting,” she had said.

Sidhu was absent because he had back surgery the day of the meeting, city officials said.

The subsidy plan passed last week without anyone from the public speaking against it. Business leaders, building trade union members and Support Our Anaheim Resort Area (SOAR) advisory committee members spoke in favor of the plan, arguing that it would create thousands of new jobs.

Eastman and Murray sit on the SOAR advisory committee along with O’Connell, a partner in the hotel development, which some residents pointed to as a conflict of interest. SOAR, in a campaign funded heavily by the Disneyland resort, spent tens of thousands of dollars to help get Eastman, Murray and Tait elected in 2010.

And Sidhu received at least $6,800 in illegal campaign donations from businesses formed by Patel and O’Connell. He accepted more than $32,000 in various election campaigns from individuals and firms connected to the hotel developments, records show.

Tait made defended Eastman, Murray and Sidhu as “good people” who had cast many votes that benefited the community. He said he hoped that the controversy doesn’t end up dividing the council.