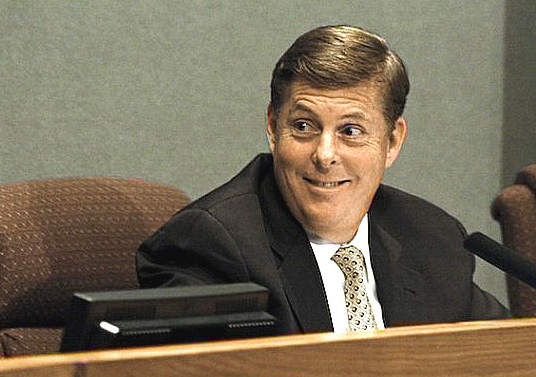 On an evening last June, Orange County Transportation Authority CEO Will Kempton hosted a small party at his home in Dove Canyon, a wealthy enclave in Rancho Santa Margarita.

“We will drink many bottles of excellent wine,” Kempton said in his invitation.

The day after the party, Murray emailed the invited guests, whom she described as “good, treasured friends,” and as the “masters of the universe.”

“Good to know we all still have a joyful, mischievous side!!” Murray wrote.

Emails, which were obtained by Voice of OC from OCTA under the California Public Records Act, not only show the conviviality of the county’s power elite, but also that Pringle has remained very much in the mix despite his official departure from public life.

Pringle has arguably been Orange County’s most powerful public figure of the past decade. As of 2010, he simultaneously served as mayor of Anaheim, the county’s largest and most influential city; on the board of OCTA, the county’s multi-billion dollar transportation agency; and as chairman of the state’s High-Speed Rail Authority, which is attempting to build a bullet train network.

And though he relinquished two of those titles more than a year ago and stepped down as high-speed rail chairman last July, emails and interviews show that he continues to use them to his advantage.

Pringle’s fingerprints have appeared on deals ranging from transportation contracts to a controversial hotel subsidy. The records reveal Pringle’s penchant for walking right to, perhaps even over, the line drawn by the state’s revolving door law, which governs how a former elected official may interact with the public agencies for which he or she served.

As Voice of OC reported Monday, at least one meeting and contract award to a Pringle client has a good-government expert questioning whether Pringle broke the law, which specifically bars elected officials from lobbying their old colleagues for 12 months after they’ve left office.

Last July, seven months after Pringle left OCTA, he sat down for a breakfast meeting with OCTA Deputy CEO Darrell Johnson and the top executive at the Anaheim Transportation Network, a small transit agency — and Pringle client — that provides public transportation to Anaheim’s resort district.

By January, OCTA awarded the transportation network a $185,000 contract to develop an OCTA program known as rideshare, a planned outreach drive to encourage the public to reduce its carbon footprint by biking, walking, carpooling or taking public transit to work. Two subcontractors, including Curt Pringle and Associates, which is to receive $37,000 under the contract, are carrying out the vast majority of the work.

Pringle, Johnson and ATN Executive Director Diana Kotler insist that Pringle did not break the law because seeking that contract was never specifically discussed during the meeting.

Beyond the rideshare contract, emails show just how closely involved Pringle stayed with issues at both OCTA and the High-Speed Rail Authority.

Examples are his interactions last November regarding the Transportation 2020 Committee, which he had previously chaired, and the Finance and Administration Committee. Pringle emailed Murray, Dunn, Nocella, Tom Umberg, then chairman of the High-Speed Rail Authority, and Kate Klimow of the Orange County Business Council. Pringle asked them to contact members of the committees about specific talking points.

“I would like to ask you to tell me who you feel comfortable to contact. And please keep me posted on your contacts and feedback,” Pringle wrote in an email on Nov. 23 last year.

Pringle describes his contact with OCTA officials on high-speed rail not as lobbying on a specific issue but advocacy for an issue about which he is passionate.

Among those he contacted with his viewpoints is Dan Richard, who was appointed by Gov. Jerry Brown to succeed Pringle on the high-speed rail board and is its current chairman. Emails show that just a few months after leaving the board, Pringle contacted Richard by first going through Kempton.

“Had a great chat this evening with Dan Richard!” Pringle wrote to Kempton in October. “Thanks for encouraging him to connect with me.”

Kempton replied: “I think you will agree that you, he and us are on a similar track. Excuse the pun.”

Pringle has also stayed involved in Anaheim politics — some say too involved. He endorsed Tom Tait’s candidacy for mayor, and it was widely assumed when Tait was elected that Pringle would still be pulling the levers of power.

That assumption turned out to be wrong. Soon after Tait took office, relations between the two broke down. Sources close to both say Pringle, accustomed to being in control, couldn’t stand the idea that someone else was at the helm.

Many insiders say the city’s controversial hotel subsidy deal deepened the divide between the two.

On Jan. 24, the City Council approved a $158-million subsidy for the developer of two four-star hotels at the city’s GardenWalk center. Tait and Councilwoman Lorri Galloway broke from the council majority and voted against the subsidy. Tait had called it bad public policy that is unfair to other hoteliers in the area.

But at least one of the developers — hotelier Bill O’Connell — was a Pringle client, raising questions from some opposed to the subsidy about whether Pringle had helped secure the council votes to approve the deal.

One City Hall source said that Pringle was seen with Murray and O’Connell at The Ranch Restaurant & Saloon in Anaheim the night of the Council vote, celebrating the subsidy deal with dinner and drinks. It remains unclear what Pringle was hired to do.

Some sources close to City Hall say they are disturbed by Pringle’s ongoing involvement in the public sector. Some accuse him of profiting by actively working against the interests of his former constituents.  “I think you just like to know,” said one source. “I think it’s more of the disclosure aspect.”

Others say they are not surprised that Pringle is still involved.

“I don’t know what his influence is, but when you have a skill set of his — working at the state and the local level and everything in between — why wouldn’t people ask him for advice?”  said Lucy Dunn, president and CEO of the Orange County Business Council, which has been a Pringle client, according to Pringle’s public disclosure forms.

“His experience level is extremely excellent. Isn’t that his business — to represent clients and stuff like that? Isn’t that what he does?”

Pringle’s clients say he has served them well.

Tim Conlon, general manager of California Yellow Cab, said he hired Pringle to be the company’s “eyes and ears” at Orange County city halls. “He [Pringle] does just basically what the title says, he’s a consultant, he tells us what’s possible and what’s not possible,” Conlon said.

California Yellow Cab is in the midst of negotiating a new taxicab franchise with Anaheim, and Conlon says he hopes the City Council will grant his company a more equitable share of the taxicab licenses, which are now unevenly distributed in favor of Yellow Cab of Greater Orange County. The franchise is scheduled to come before the council in May.

Pringle has worked for California Yellow Cab since January and for an affiliated company, American Logistics, several months before that, Conlon said. “Through this franchise process, if we needed to get face time with a council member, it was certainly easier to do with Curt Pringle,” he said.

Emails obtained from the city of Anaheim show that Pringle’s firm has been lobbying the city on behalf of California Yellow Cab since at least September.

“Tim and I greatly appreciate the time and interest in the issue and commitment to ensuring a fair process as this moves forward,” Curt Pringle and Associates Vice President Peter Whittingham wrote in an email to Anaheim Councilman Harry Sidhu’s council assistant the day after Sidhu, Conlon and Whittingham met.

After that meeting, Whittingham set up another with Sidhu, himself and representatives of Pringle client Federal Signal Technologies, which had hoped but was unable to secure a contract to implement a license plate recognition system with the Anaheim Police Department.

While Whittingham is a registered lobbyist, Pringle is not registered as an active lobbyist in Sacramento or in the county.

Bob Stern, president of the Center for Governmental Studies, says there’s good reason for that: Peddling influence over public officials doesn’t sit well with the public.

“People don’t like to be called lobbyists. That’s a bad name,” Stern said. “Nobody wants their kids to grow up to become lobbyists.”