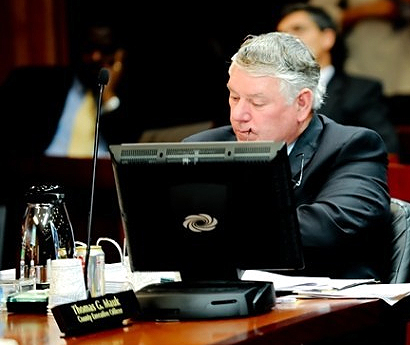 Board of Supervisors Chairman John Moorlach briefed reporters Thursday afternoon, saying that the board had unanimously agreed to a $270,000 severance payout to Mauk.

Mauk, 68, also received a “full indemnification and defense in any civil or administrative proceeding” and an agreement that the county would provide him with the legal counsel of his choice in any matter, up to an hourly rate of $300.

Despite several tense private exchanges between Mauk and the board since District Attorney Tony Rackauckas announced the charges against Bustamante earlier this month, both sides were very cordial and complimentary on Thursday.

“They have treated me fairly,” Mauk said. “It was time for a change in leadership to re-energize the organization.”

Mauk said he was “proud to have worked with this board of supervisors.”

Mauk said his resignation didn’t have anything to do with the Bustamante issue noting that he had been mulling retirement for some time.

He did, however, note that the Bustamante crisis had unearthed a more pressing need at the county to ensure proper reporting of sexual harassment incidents.

“We need to create a culture where women feel comfortable coming forward,” said Mauk. “It would be fair to say that until Bustamante I didn’t recognize that it was as big a need as it is.”

There are nagging questions about how Bustamante’s activities were not reported. There are also questions about how internal probes were mishandled and why the referral to the district attorney took so long, coming six months after Bustamante himself was allowed to quietly retire along with a 90-day salary severance.

Moorlach also praised Mauk, issuing a statement stating, “I’ve had the privilege of working with Tom Mauk for roughly half of my seventeen years here at the county. I appreciate his service to the county and its taxpayers and want to wish him all the best in his future endeavors.”

In interviews with reporters, Moorlach defended the payout to Mauk, saying that terminating Mauk would have generated “a much larger settlement.”

“A contract is a contract,” Moorlach said.

He was, however, critical of the type of severance agreements granted to Mauk, saying that the provision had been approved in 2004 before his time.

Moorlach also avoided questions about why supervisors had asked Mauk to resign. “We want to thank Mr. Mauk for his service. We wish him all the best,” he said.

Nick Berardino, who heads the county’s largest union – the Orange County Employees Association – also reflected kindly on Mauk but added that the payout would have ominous implications.

“For Mauk personally, we fought like cats and dogs. But he’s out of the ring now so best of luck,” Berardino said.

Yet the CEO’s resignation accompanied by his large payout, Berardino said, would complicate ongoing labor talks because his members would be incensed.

“It’s going to appear to be patently unfair to our members who are routinely released when poor performance is an issue. For those workers, Berardino said, “the only thing they get is the door.”

Berardino also said his members would not be agreeing to any labor concessions given the current environment.

“The impact on negotiations is clear. You have a county that has a leadership crisis and which has created an extremely unstable environment. There has never been a time in the county history where the county leadership has failed so miserably while lining their own pockets.”