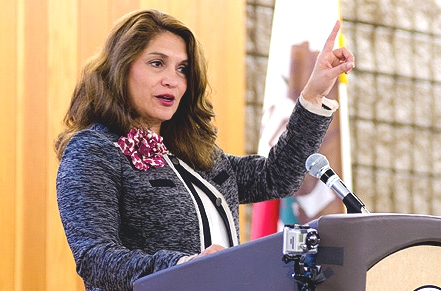 Sharon Quirk-Silva, the Fullerton mayor who confounded political experts in both parties with her upset victory over Republican Assemblyman Chris Norby, will be sworn into office Monday, giving Democrats their first legislative supermajority in 120 years.

But even before she hired staff or introduced her first bill, Republicans put a target on her back.

“I will be a targeted district, starting now,” she said during an interview last week.

And it was supposed to be safely Republican. The GOP and Democrats have roughly equal numbers of voters, but the combination of a large number of voters who belong to no political party and usually vote Republican as well as traditionally lower Democratic voter turnout, led political leaders of both parties to assume the district would remain Republican.

Even before Quirk-Silva’s victory was certified Nov. 21, the 50-year-old elementary school teacher faced at least three new challenges: learning the ropes in the Capitol, where sophisticated lobbyists have dominated inexperienced and short-term lawmakers; establishing an office in her new district that can handle its diverse ethnic population; and doing it all without giving Republicans the ammunition to reclaim her seat in two years.

As part of her strategy, Quirk-Silva said, she will concentrate on making sure the concerns of those in her district are heard, including hiring staff who speak either Spanish or Korean.

She also is relying on her lifelong ties to the area and a base of support she built while serving eight years on the Fullerton City Council.

Representing the Town Where She Grew Up

Quirk-Silva is child No. 6 in a family of 10 children that moved to Fullerton from East Los Angeles about 50 years ago. Her father was an appliance repairman, and her mother worked for 25 years in a department store.

Quirk-Silva is divorced, and her husband of five years, Jesus Silva, is a junior high school math teacher in Fullerton and member of the Orange County Democratic Central Committee.

It was Jesus, Quirk-Silva said, who kept encouraging her after she lost the June primary by an 18-percent vote gap. “He was a full-time worker at a volunteer rate,” she said.

Until Wednesday, when she took a leave of absence, she taught third and fourth grade at Richman School, elementary school in Fullerton she attended while growing up.

The school, she said, is 95% Latino and 95% of the students are generally low income, but “our test scores keep going up every year.”

Education, she said, will be a high priority for her as a legislator, particularly higher education and finding ways to affordably provide college opportunities for high school graduates.

Quirk-Silva, who has taught at various Fullerton schools for 27 years, went to Fullerton College and UCLA and received her teaching credential from Cal State Fullerton. She has four children — two girls who are college graduates and two younger boys, one attending Fullerton College and the other at Fullerton High School, the same school she attended.

She said the family has its share of college loans and a firsthand appreciation of the financial challenges facing students and their parents.

Her other major interests are transportation, homelessness and veterans issues. She’s asked for a seat on the Assembly Transportation Committee but probably won’t have an answer until sometime this week. It’s a highly coveted committee assignment, not least because of the large campaign contributions made by contractors and other transportation interests.

North Orange County, she said, has strong bus, train and highway needs, including creating some sort of connection from the Fullerton train station to St. Jude’s Hospital and Cal State Fullerton.

Military veterans need help in a variety of employment, education and other areas, including coordination of existing services and creating ways to help vets and others to learn more easily what is available, she said.

“It isn’t always a lack of resources but a lack of awareness about what is available,” she said. “They can get help.”

Quirk-Silva’s last two years on the City Council were among the most turbulent in Fullerton history because of the July 2011 beating death of Kelly Thomas, a 37-year-old mentally ill transient, by six Fullerton police officers.

She and her political opposite — Republican Councilman Bruce Whitaker, who also was Norby’s district director — were the only Fullerton City Council members not opposed by backers of the Thomas’ family. The other three councilmen were recalled this June in a campaign in which critics complained the three failed to act quickly to correct problems at the police department and discipline officers and showed no compassion for Thomas’ family.

Throughout her political career, Quirk-Silva said, “I tried really hard to be someone who listened.” She said she met often with members of the community as a whole. “I think arrogance is just the death of so many people,” she said.

When she first joined the City Council, she said, a leader of the local Chamber of Commerce suggested she write down a handful of her “core values” and keep them with her as reminders.

The values, which she said she plans to apply in Sacramento, include “No. 1, integrity.” It’s also important, she said, to understand the district as a whole. She’ll take over Norby’s district office in Fullerton, but when the lease runs out in February, she said, she wants to rent space somewhere closer to the center of the district and more convenient to more voters.

She said she’s had about 100 applicants for jobs on her staff. She is seeking at least one district staffer who speaks Spanish and another who is fluent in Korean.

Her staff in both the district and Sacramento also must be willing to solve problems, not just pass questions on to somebody else, she said.

“The person who answers the phone does their best to solve it,” she said.

In her new position, she’ll earn $90,526 and receive health benefits but no pension. Pensions were taken away from legislators in 1990 when voters approved term limits. Her budget from the Assembly for running her office will be $263,000, which will include staff salaries, mailings, travel and other expenses.

Two other core values that Quirk-Silva said she will take to Sacramento are a reminder to look at issues comprehensively, not just from one side. It’s important, she said, to understand the full consequences, as much as possible, of the decisions she’s asked to make.

And, she said, she’ll listen.

In June, voters changed California’s term limit law in an effort to give lawmakers more experience on the job and cut the influence of lobbyists, who often spent their careers in Sacramento and knew more about issues and how government worked than the elected officials. They also can spend lavishly on receptions and invite lawmakers to coveted sporting events and even foreign junkets.

Asked how she intends to handle lobbyists while still learning her way around Sacramento, Quirk-Silva said she’ll listen to their concerns but maintain her independence.

Based on what she learned on the Fullerton City Council, she said, it’s not just one or two contacts that give a lobbyist influence but “multiple visits. The more you meet, the harder it is to say ‘no.’ ”

With that in mind, she offered a symbolic example of her attitude: “I will meet with a lobbyist, but I will buy my own coffee.”

And the one question that already is raised repeatedly is what will Quirk-Silva do if Democrats try to use their new supermajority to raise taxes?

She said it’s an issue the legislative leadership probably won’t even consider for quite awhile. Even so, she said on that and other controversial and important points, her attitude is: “I’m not rushing into any ‘jump on the bandwagon’ [issues like] raising taxes, any of those things.”