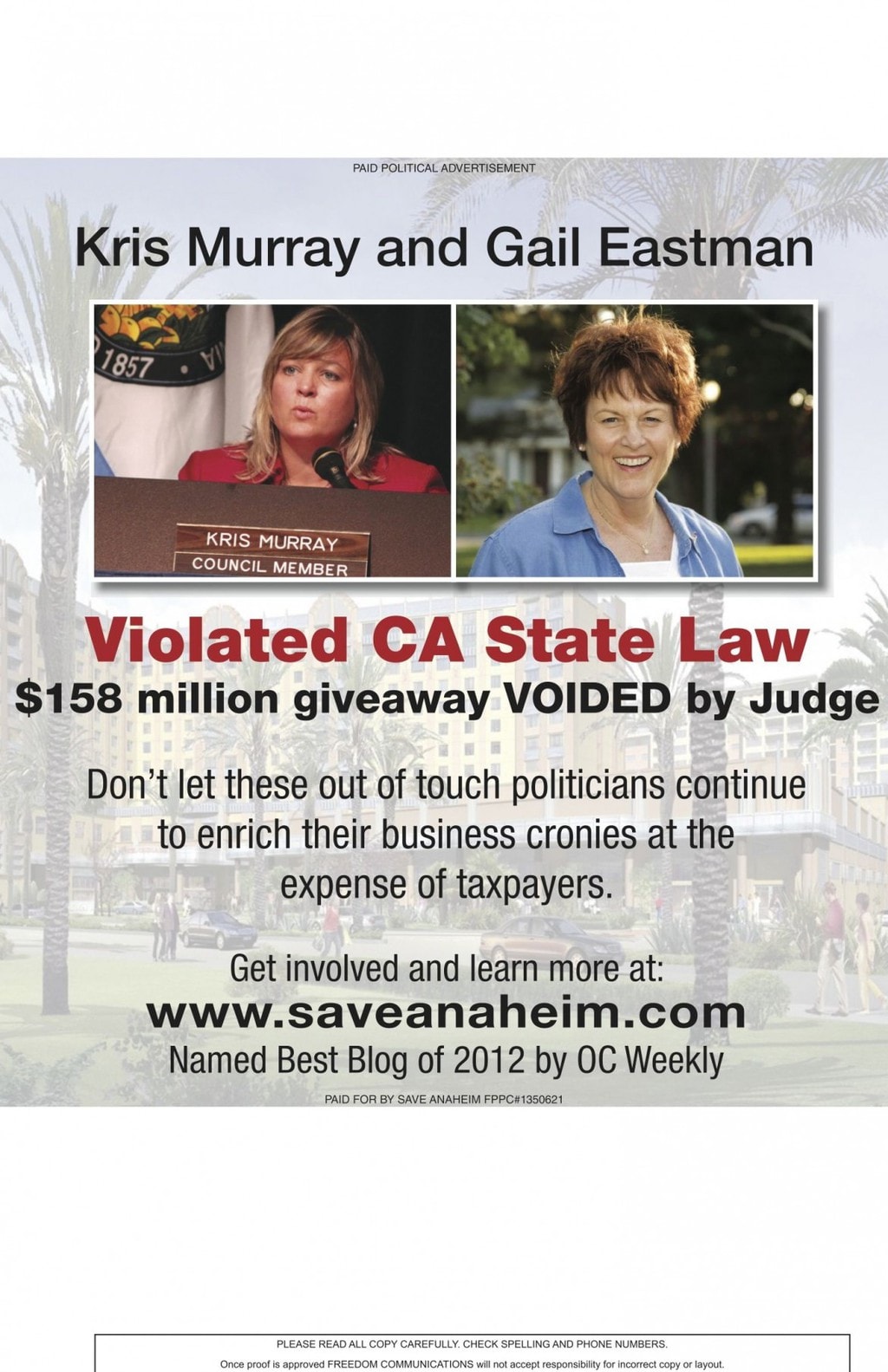 The Orange County Register abruptly altered its advertising policy, barring ads that challenge politicians by name, after two Anaheim city councilwomen complained to the newspaper’s new owners about ads from a local activist that criticized their support of a controversial hotel subsidy, Voice of OC has learned.

The ads came from Jason Young, a City Hall blogger at Save Anaheim who opposes the council majority, which is heavily backed by Disney and other influential local business interests. In December, the Register ran an ad submitted by Young in its Anaheim weekly publications asserting that Councilwomen Kris Murray and Gail Eastman violated state law when they approved a $158-million subsidy for local hoteliers.

The ads apparently infuriated Murray and Eastman, and according to multiple sources, the two made their feelings clear during a meet-and-greet session with Eric Spitz, who along with Aaron Kushner, purchased the newspaper last year.

Murray and Eastman told Register officials that the ad’s statements, which referred to state open meetings law violations by the councilwomen, were “unfair and incorrect,” said Arianna Barrios, Murray’s senior policy aide who attended the meeting.

A Superior Court judge voided the subsidy vote in December, finding that the City Council vote to approve it indeed violated the state’s open meetings law, which is known as the Ralph M. Brown Act.

“The Register just buckled,” said Cory J. Briggs, the attorney who represented the activists in the suit and considers the subsidy ad that angered the council members to be factually accurate.

Kushner, who responded by email to a Voice of OC query within hours, acknowledged that the Register recently adjusted its policy regarding political advertising. He said, however, that the policy was changed because “we don’t like negative political advertisements,” not out of support for Anaheim’s council majority.

“It was brought to our attention that the Register has had an inconsistent process for reviewing political advertising, which we are working to address and make more systematic,” Kushner wrote. “This is not a comment or endorsement of any particular politician or political cause but a systematic review of our process as we strive to better serve Orange County in everything that we do.”

Nonetheless, the change has raised eyebrows among media industry experts and irked Young and some others close to City Hall because it came so closely on the heels of Spitz’s meeting with the councilwomen.

Barrios said the meeting happened just before the holidays, and by January the Register had begun rejecting ads from Young that named council members, according to an email chain between Young and a Register advertising representative that Young provided to Voice of OC.

“I was just outraged that a City Council member would go to the lengths to meet with the publisher of the biggest newspaper in town to shut down my ability to tell the truth about what’s going on at Anaheim City Hall,” Young said.

Mayor Tom Tait addressed the disparity between working-class Latino residents and wealthy white neighborhoods during this year’s State of the City address, lamenting Anaheim as a tale of “two cities.”

Some experts on media practices have criticized the Register’s decision, warning that at the very least it gives the appearance that the region’s dominant news source is inappropriately filtering free speech rights.

Marc Cooper, an associate professor of professional practice at USC’s Annenberg School for Communication and Journalism, went so far as to call the Register’s decision to reject Young’s ads “cowardly and hypocritical” because that level of scrutiny likely doesn’t include all advertising, right down to “carpet cleaning” ads.

“We don’t need the OC Register acting as mommies and daddies telling us what’s appropriate,” Cooper said. “Are they going to stand by every piece of advertising?”

This issue comes at a critical time in the Register’s history. The new owners have made national news with an aggressive strategy that refocuses newspaper’s resources on its print product and have spent millions adding staff to the newsroom and pages to the daily paper as well as to its weekly publications.

Kushner has been making the rounds to local business and community groups, touting the strategy as an exercise in “building communities.” The idea, he says, is for the daily paper to reassert itself as the central hub for residents to get their news and information.

Equally as important to Kushner and Spitz, of course, is for the paper to again become the go-to media outlet for local advertisers. No place is more important to that equation than Anaheim, home to Disneyland and California Adventure, which attract more than 20 million visitors annually.

It is Disney and the rest of the city’s influential business interests, which heavily financed Murray’s and Eastman’s campaigns, that Young has targeted in his ads. They have repeatedly called out Murray and Eastman for their support of the hotel subsidy and a proposed streetcar project that would serve the city’s resort district.

Young began running his ads in September, but it wasn’t until January that the newspaper began taking issue with their content, according to the email chain between Young and the advertising representative that Young gave to Voice of OC on the condition that the representative not be named.

What follows is a verbatim excerpt from the chain:

Hello Jason to run a full page ad in the Anaheim bulletin /Anaheim hills paper in color the cost would be $1464.00. Call me when you get a chance we will need to get the ad approved. the last ad that ran created some heat.

Hi [name redacted], Heat from who?

A few minutes later the ad rep responded back:

When I was on vacation and I got an email just saying that political ads must be reviewed before they get released. That one in particular was mentioned. When we meet I will let you know more about it.

At 2:38 p.m., Jan. 15, Young emailed the representative again with the following wording for an ad, calling it “accurate”:

ATTENTION ANAHEIM TAXPAYERS! Mayor Tom Tait voted against it. City Manager Bob Wigenroth and city staff opposed it. A lawsuit claimed it was an Illegal Gift of Public Funds. Over 15,000 signatures were gathered to Let the People Vote on future subsidies. The OC Register called it a “backroom sweetheart deal.” A Judge voided it. Now the corrupt Anaheim City Council majority, led by Kris Murray, wants to reinstate the $158 million Giveaway. Tell Murray, Eastman, and Brandman to VOTE NO on this $158 million giveaway.

Hello Jason I submitted the copy that you sent me to management and I am very sorry but it was not approved. Please feel free to call me if you have any questions about this.

Young did have questions, and in a subsequent face-to-face conversation he said the ad rep told him that Kushner “just wants to play nice with everybody” and that’s why the policy was changed.

Young took the word “corrupt” out of the ad, but it was still rejected, he said.

Instead of building community, Young and some industry experts said, the Register has effectively narrowed the political conversation by changing its policy. While the city’s major political players, like the Disney and public employee unions, have spent hundreds of thousands of dollars on mass mailers, he and other activists with limited funds have few avenues to compete.

“I don’t have Disney money,” Young said. “My only avenue to educate the public is through my website or these $700 ads I run.”

Barrios took issue with the characterization that the complaints constituted “pressure” on the Register’s owners to reject Young’s ads.

“It was a matter of conversation. It wasn’t a matter of ‘I’m telling you about this because I want you to do something about it,’ ” Barrios said. “I would be hard-pressed to believe that one council member would have the ability to have an organization — a respectable organization like the Register — change their policy just because she was upset about one ad.”

Kushner, meanwhile, said that it isn’t the newspaper’s place to be participating in the rough and tumble of local politics.

“We don’t like negative political advertisements and believe that if we are doing our job, they should undergo a greater level of systematic scrutiny. We take our responsibilities to Orange County seriously so when we see opportunities to improve, we accept that responsibility and strive to do so,” Kushner wrote.

However, the email chain shows that the scrutiny in this case was to some degree influenced by forces other than internal scrutiny. For weeks, Young went back and forth with the Register representative to determine who complained.

The picture finally became clear on Feb. 19, when Young sent the following email to the ad rep:

Any word on that name?

You were correct earlier it turns out that it was connected to Kris Murray.

“The paper should be an honest broker of competing views,” Starkman said. “It shouldn’t be arbitrary.”

The newspaper’s policy on negative political ads as quoted in Kushner’s email to Voice of OC does not outline any specific standards by which political advertisements are judged. Here is the excerpt of the policy that Kushner sent:

The Register pays particularly close attention to advocacy or opinion-based advertisements that could be construed as negative or attacking an individual or specific organization. The Register may find it necessary to consult the advertiser in updating or in some cases cancelling advertising messages at any time, and such decisions are made in the best interest of our subscribers and our community.

Cooper said that rejecting political ads is common for TV outlets but not for newspapers. He said Young’s situation speaks to a root problem about mass media. While one stated mission is to “afflict the comfortable and comfort the afflicted,” the owners of publications like the Register “are always one of the very comfortable” and more concerned about profit, Cooper said.

Mainstream media outlets typically don’t reject negative ads from political candidates with the backing of powerful interests but are more likely to put the kibosh on such ads from grassroots activists, Cooper said.

“Their instincts are always on the weak side,” Cooper said. “This is just easy pickings when you’re dealing with the activists group.”