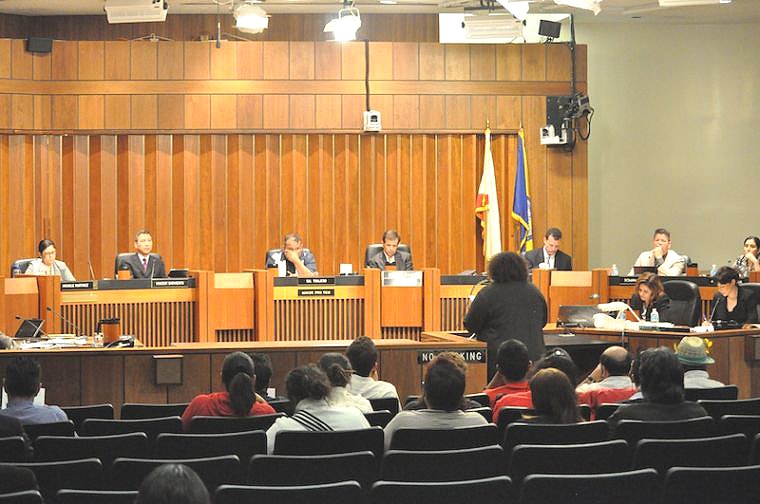 The Santa Ana City Council Monday passed what could be called its first post-crisis budget, adopting a two-year spending plan that beefs up reserves, potentially restores furlough hours to city employees and provides small increases to the police and code enforcement budgets.

The budget, which is set at $205.7 million for the 2013-2014 fiscal year, is not only structurally different from the current year’s but was passed under far different circumstances. A year ago, officials were dealing with a $30-million budget gap that had the city teetering on the edge of bankruptcy and were facing harsh accusations of lack of transparency.

This year, thanks in large part to the decision to outsource the city’s fire protection, the city is working with a reserve of between $27 and $30 million. City officials held nine meetings and two community forums before passing the budget.

Interim City Manager Kevin O’Rourke, however, called the spending plan “fragile” with very little room to maneuver. “As an outsider looking at this, this is a lean, mean machine,” O’Rourke said.

At O’Rourke’s suggestion, the City Council approved a two-year budget cycle, with the planned budget for the 2014-2015 fiscal year set at $204.5 million. A second reading of the budget approval ordinance is scheduled for June 17.

Revenue is expected to rise during the next fiscal year as the economy continues. Increases are predicted to rise by 2 to 3 percent in the largest tax revenue sources, such as sales, business and property taxes.

The 2013-2014 budget also includes $5 million in additional annual revenue from the dissolution of redevelopment agencies, which were used to alleviate blight by funding improvements by diverting property tax revenue. Gov. Jerry Brown had pushed to eliminate redevelopment agencies to balance the state’s budget, and the property tax revenue that had been diverted was redistributed to local governments.

There will also be a one-time allocation of revenue to the general fund resulting from the city’s ongoing dispute with the state Department of Finance over leftover redevelopment funds. The city has already paid $10.6 million to the state, of which $1.9 million will be returned to the city. There is a lawsuit pending over millions more.

The budget also assumes that concessions agreed to by the city’s service employees and police officers labor groups would be expiring in 2013-2014. City staff is still negotiating with the labor groups over how the compensation will be reinstated.

General employees had taken furloughs, leading to the closure of City Hall on Fridays. The employees expect the return of a combined 80,000 in work hours this next fiscal year. Police officers would be able to cash in overtime and unused time off they had deferred and receive overtime pay instead of compensatory time off for extra hours worked.

The largest increase in spending, about $2 million, is for police field operations and stems largely from salary and benefits, according to Police Chief Carlos Rojas. He said he expects that amount to decrease as a result of labor negotiations.

Another slight increase in the 2014-15 fiscal year is from the rising cost of salary and retirement benefits, according to Assistant Finance Director Robert Cortez.

In recent budget forums, residents have asked for the Police Department to be reorganized to focus more on community policing. Latino residents, which constitute nearly 80 percent of the city’s populace, have complained that they have difficulty trusting police because of the department’s poor outreach to Latino neighborhoods.

“We propose to restore community policing and to have programs for our youth,” said activist and 18-year city resident Apolonio Cortes at Monday’s meeting.

The police budget also shows that the department is reorganizing since the departure of longtime Police Chief Paul Walters. Special investigations, which previously consumed more than $5 million annually, is being incorporated into the investigations bureau, Rojas said.

Officials are also studying ways to cut costs at the city’s jail, which is operating at a loss between $2 million and $8 million, according to O’Rourke.

Spending on code enforcement, a consistent demand from residents, will also rise.

The plan is for the number of code enforcement positions to increase from 8 to 15½. Also, city officials have set aside about $2.6 million to update the city’s general plan and zoning code, revisions that are long overdue, officials said.

Councilwoman Michele Martinez said that when the city applied for the grants for the Garfield community center and Willard park, residents were promised that the public amenities would be open. She asked for a plan to keep that promise.

Asked how the budget could be adjusted, O’Rourke said: “It’s going to be some tough choices. Something else is going to have to be moved around. That’s how fragile the general fund is.”