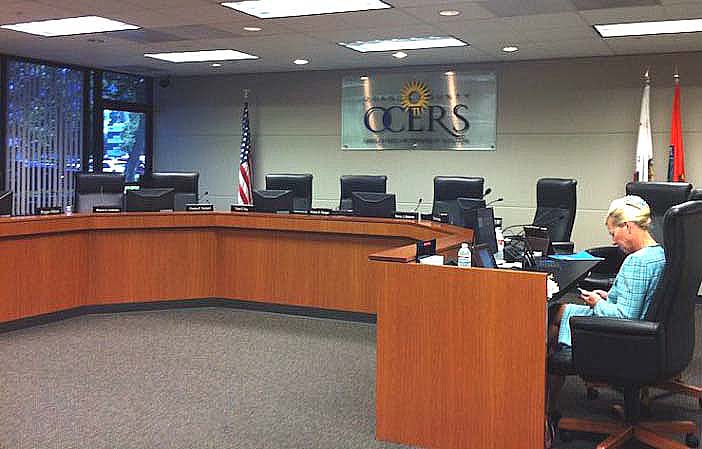 Orange County Treasurer-Tax Collector Shari Freidenrich’s waffling on a key pension-funding vote as a member of the county’s retirement board has put her in the cross hairs of both Republicans and labor leaders and triggered calls for an official investigation.

Last month, Freidenrich voted along with the majority of the Orange County Employees Retirement System or OCERS board against a plan to shorten the amortization schedule of public pension debt, which would have increased the amount that member agencies such as county government and the fire authority pay annually toward pension system funding.

Her vote has drawn intense criticism from influential Republican leaders such as Orange County’s Lincoln Club, who are increasingly pressing for unfunded liabilities to be paid off as soon as possible, even if it forces cuts in public services.

Then in recent weeks, Freidenrich made it clear that she wanted to reconsider her vote.

That in turn angered labor officials, who argued that she is bending to the will of those who want to artificially increase the annual costs of providing retirement benefits to public employees.

At Monday’s regularly scheduled meeting of the OCERS board, labor officials accused Freidenrich and other board members of breaching their fiduciary responsibility and called for an investigation.

They also raised specific concerns about emails sent by OCERS Chairman Tom Flannigan on the issue to other board members before last month’s public meeting, raising the prospect that the state’s open meetings laws were violated.

“The line between the board majority’s exercise of informed, reasoned judgment on the one hand and breaches of fiduciary duty on the other has become dangerously murky,” said Don Drozd, general counsel for the Orange County Employees Assocation, during the public comment period at Monday’s meeting.

“To the thousands of public employees who are watching you, it at least appears that some part or many of the board’s actions resulting in increases to pension benefit contribution rates is being driven by somebody who has it out both for them and their benefits.”

Flanagan said he took “serious umbrage at any hint that I’m not being professional,” adding that “I don’t think I attempted to persuade Madam Treasurer to do anything,” although he noted the two had discussed the issue after last month’s meeting.

The retirement board’s lawyer, Harvey Leiderman, shut down Monday’s debate after several hours, arguing that airing such dirty laundry in public and without being formally placed on the agenda had left board members open to a lawsuit both as individuals and as a group.

Leiderman publicly chastised OCERS board members, saying that based on their public comments Monday, “there is significant exposure to litigation of members of this board and this board.”

Leiderman, who conducted a public workshop for board members on the state’s open meetings laws in May, never publicly said what the specific threat was.

“Under the circumstances, it would be prudent for the board to go into closed session to consider that exposure and the ramifications of that exposure,” Leiderman declared without being specific.

During the meeting, labor leaders in the audience also resurrected the option of having plan sponsors such as the county government leave OCERS for the state retirement system, known as the California Public Employees’ Retirement System or CalPERS.

“Today’s debate is probably the strongest argument to move to CalPERS,” said Tom Dominguez, president of the Association of Orange County Deputy Sheriffs. He said that many plan participants are losing trust that the OCERS board is making apolitical calls. “The concern is with governance,” Dominguez said.

The controversy started last month when Freidenrich was the swing vote on a series of 5-4 decisions on the amortization issue. She then became the subject of an intense but quiet campaign to switch her vote.

At Monday’s meeting, Freidenrich expressed her desire to change her June 17 vote without explaning other than to say she hadn’t clearly understood the system’s actuary at the last meeting as she participated via phone conference. The debate on amortization, however, has run for months.

“It was the actuary that indicated information that I misheard while I was on the call,” she said. “That affected questions I was going to ask.”

“What was it that [Segal Co. actuary] Andy Young said that you misunderstood so that we can all be sure that’s causing you to make a dramatic change that will affect our members for a long time,” Prevatt said.

Freidenrich’s public rationale on Monday also differed considerably from what county Supervisor John Moorlach said she wrote in an earlier email to him.

Moorlach told Voice of OC last week that Freidenrich stated in an email exchange that she voted against the amortization change because she was trying to help the county manage its budget.

At Monday’s meeting, Freidenrich didn’t initially know what motion she wanted to change — there were five —or how until publicly coached by OCERS CEO Steve Delaney on her options.

“I don’t recall the series of votes,” Freidenrich said before Leiderman pointed out that they were detailed in the official minutes of the June meeting that were in front of her.

The exchange further fueled accusations from labor representatives in the audience that Freidenrich was violating her fiduciary duties to the plan because she was changing votes based on ideology, not the best interests of the pension plan.

One example of the pressure on Freidenrich from Republican circles is a June 18 email sent by Jon Fleischman — who publishes the state’s leading online conservative publication called the Flash Report — to Stanton City Councilman Dave Shawver the day after the OCERS vote.

“Until we actually get to a point where current union employees are losing their jobs in order to pay for the benefits of retired union members, there is no pressure on unions to reduce their current salary and benefits,” Fleischman wrote.

Moorlach acknowledged that Freidenrich has been under pressure from Republican leaders, noting that he had a brief email chat with her after the vote when he told her his opinion.

“I believed she should have voted yes,” Moorlach said.

Moorlach said Freidenrich had explained her initial vote to him by expressing an interest in helping plan sponsors manage their budget, acknowledging that county leaders faced “a really tight budget.”

Yet Moorlach said he told Freidenrich that a tight budget didn’t mean he wanted to avoid paying county debts on time.

“We can’t keep extending this thing out more. That costs more,” Moorlach said.

In what has become normal practice for Freidenrich on contentious issues, she declined to respond to a phone call on the issue from Voice of OC before Monday’s meeting.

Moorlach acknowledged there is a battle on the OCERS board among appointees from labor and from the Board of Supervisors on how to handle pension obligations.

“When you start being liberal with amortization schedules and start kicking the can down the road … that is poor stewardship,” he said. “You can’t be fully funded if you re-amortize every few years.”

Moorlach and other Republican leaders, such as Lincoln Club President and OCERS Board Member Wayne Lindholm, have focused on the swelling unfunded liability of the local retirement system — now more that $5 billion — since benefits were expanded in 2004 for general employees.

They point to recent pension benefit enhancements in 2001 and 2004 as being primarily responsible for the spiraling unfunded liability. Labor leaders, however, argue the unfunded liability is more connected to market losses and actuarial changes over the past decade.

Late last year, OCERS board members voted to lower their investment earnings assumptions by a half percentage point to 7.25 percent as opposed to the one-fourth point reduction advocated by labor officials. That set the stage for the amortization debate.

Recasting those votes drew immediate fire from other OCERS board members, such as public safety representative Roger Hilton, who questioned how the retirement board can govern if vote results are going to be in flux.

“We can’t just keep re-agendizing things after we vote on it,” Hilton said, adding that plan sponsors need stability. To revote until a specific result is found “is a terrible way to do business,” he said.

Prevatt said that if the board wants to start recasting votes, then he would like to re-agendize last year’s vote to lower the investment assumptions. Despite the protests of Flanagan, who said that issue was already decided, Prevatt insisted it be brought back at the next meeting.

After the unanimous vote to go into closed session, OCERS board members never discussed the issue again publicly.

It’s unclear whether Freidenrich or Prevatt will receive a revote or whether the entire matter will be investigated, as some board members demanded.

What is clear is that retirement meetings are likely to be well attended in the future.

“Your constituency is beginning to believe these are political actions and not actions based on fact,” said Sara Ruckle Harms, who monitors the meetings on behalf of active retirees with the Retired Employees Association of Orange County.