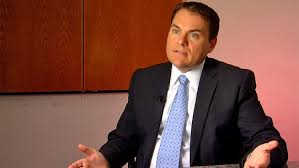 In a televised interview Tuesday, Carl DeMaio, a former San Diego city councilman and potential mayoral candidate, categorically denied allegations that on multiple occasions in 2009 he masturbated in a bathroom behind the City Council dais.

DeMaio told an interviewer with San Diego’s NBC affiliate he was the victim of “dirty politics, character assassination.”

“It’s very clear that this is a dirty lie that has been spread and advanced by organized labor,” said DeMaio, who is a conservative Republican and ardent union foe. “These are the same groups that put [Mayor] Bob Filner into office.”

DeMaio went on to say that a polygraph test showed he was not attempting deception when he denied the allegations. However, he has not made the full results of the test public.

Filner resigned his mayoral post Aug. 23, effective Friday of this week, after a six-week saga during which more than 18 women came forward to accuse him of inappropriate behavior or sexual harassment.

DeMaio, who is running for Scott Peters’ seat in the House of Representatives from the 52nd District, lost to Filner in the fall election and is considered one of the front-runners in the upcoming special election.

In a statement Wednesday, Hueso declared:

“I was asked by the reporter if I witnessed an incident involving council member Carl DeMaio, and I answered truthfully. I would never maliciously disparage a person’s character or impede their future with false or misleading information. This was difficult to share, and I have nothing further to add.”

When reached for comment this week, Emerald said, “I absolutely believe Sen. Hueso. … You can question Hueso’s politics, but he would not lie about something like this.”

On Tuesday, Young released a statement to the NBC affiliate: “During my tenure with the city I never witnessed Mr. DeMaio do anything inappropriate as a member of the City Council.”

San Diego City Council President Todd Gloria, who will assume mayoral duties Friday when Filner is officially out, also was said by Hueso to know of DeMaio’s bathroom activity.

Gloria previously declined to comment about the Hueso accusation and did not return a call from a reporter over the weekend.

Neither Hueso nor Emerald sought publication of the allegations but responded to this reporter’s questions on the alleged activity, which some said was a widely known backroom secret among City Hall staff, reporters and both Democrats and Republicans.

For instance, a top aide to then Mayor Jerry Sanders, a Republican, was involved in a September 2011 work plan that suggested researching DeMaio being caught in “a self-gratifying sexual act in a City Hall restroom … during a council meeting.”

But as his term was ending last year, Sanders endorsed DeMaio, then became president of the San Diego Regional Chamber of Commerce, a supporter of DeMaio’s policies. Sanders’ aide, Gerry Braun, who was involved in the process didn’t respond to an interview request Monday.

In his television interview, DeMaio asserted the officials “who covered up the truth about Bob Filner” are now “manufacturing a lie” against him, which will “cause pain for San Diego.”

Regarding DeMaio’s activity, Emerald said: “I am glad this is all out. It speaks to DeMaio’s character, maybe even his mental stability.”

In 2009, Emerald said she had argued for contacting police about DeMaio but didn’t do so herself because she didn’t witness the act, which she believed was known by all on the council.

“For too long, insiders tended to keep secrets,” she said this week. “There is no room for secrets. We need to be transparent — up front, thoughtful and responsible.”

In the television interview, DeMaio said,”My focus has always been to have a positive message, talk about solutions for San Diego.”

DeMaio must make his decision regarding a mayoral run quickly. The election must take place within 90 days of Filner’s resignation, and political observers say candidates need to secure substantial financial support early to establish their position in what could be a large field of candidates.

Already, Nathan Fletcher — a former Assemblyman who came in third in the San Diego mayoral primary in June 2012 — has announced his candidacy. Formerly a Republican, Fletcher switched to independent in early 2011, then to Democrat earlier this year.

“The damage is going to be done to me, but I don’t want the damage to be done for San Diego,” said DeMaio. “I’m speaking out even though I know this, uh, I’m in a damned if you do, damned if you don’t situation. I guess that’s the brilliance of what Mr. Hueso is doing.”

DeMaio went on to tell the television audience, “In my gut, in my heart, I’m going with the truth, which is the only response I can have to this lie.”

Following Voice of OC’s publication of the article on Aug. 22, the issue was reported by several national websites, including Gawker, the Daily Caller, the New York Post, and even internationally in London’s Daily Mail.

But Tuesday’s NBC spot was the first significant public discussion in San Diego by the mainstream press. Previously it had been recognized only by the alternative San Diego Reader — which followed the article the same evening Voice of OC posted it — and in a limited way on talk radio.

Scholars and critics of San Diego journalism, such as author Steve Erie of UC San Diego, have noted how squeamish local news media can be about sex topics, especially involving hometown leaders.

This reporter first heard the allegations about DeMaio about four years ago, when he wrote from San Diego for a London magazine. When he returned to focusing on Southern California in the spring of 2012, he began pursuing an article on the issue.

After no San Diego media outlet would publish Hueso and Emerald’s remarks last year before the election, the article lay dormant. Voice of OC commissioned the article in the weeks following the disclosures regarding Filner.

On Sunday, three days after the Voice of OC article was published, DeMaio began sending out a memo claiming that Young and Gloria would repudiate Hueso’s comments, offering their cell phone numbers.

Neither of them responded to calls and messages from Voice of OC.

By late Sunday, another version of the memo was sent out via email under the name of Barrett Tetlow, a former San Diego Republic Party executive and now a top staffer of San Diego City Councilman Scott Sherman.

Also on Sunday, DeMaio’s campaign spokesman, Dave McCulloch, said the memos were written by Tetlow and were not DeMaio campaign documents. He added, however, that “at some point” DeMaio had “forwarded” the email document that day.

In addition to the memos circulated over the weekend, DeMaio, through San Diego attorney Robert Ottilie, sent Voice of OC “a request for a correction of the untrue statements” made by Sen. Ben Hueso and asked the news organization to “not republish the statements of Mr. Hueso.”

Voice of OC Editor-in-Chief Norberto Santana Jr. said, “We stand by our story.”

Correction: A previous version of this article mischaracterized the circumstances of a September 2011 work plan for researching Carl DeMaio. The article also incorrectly stated that City Councilman Scott Sherman holds DeMaio’s old seat on the council.