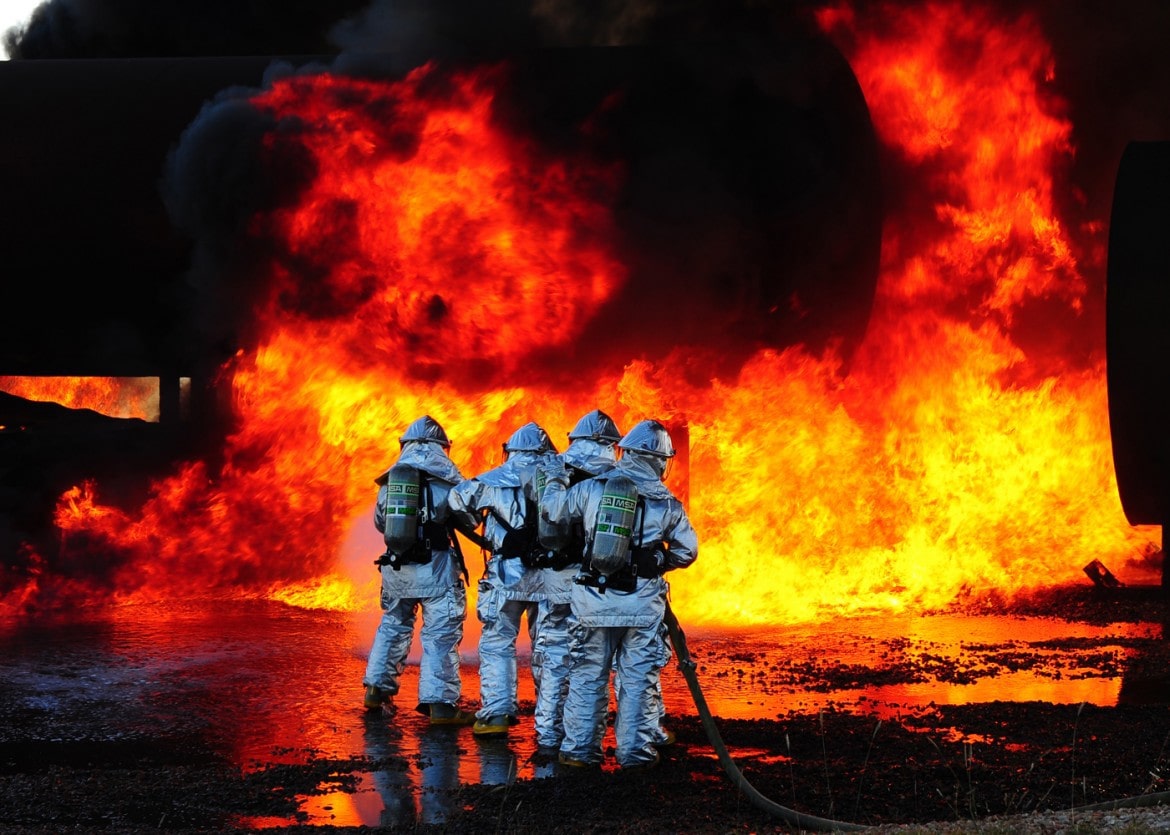 A showdown over how the county provides firefighters at John Wayne Airport is becoming another skirmish in the escalating battle over whether emergency response services in Orange County should remain largely public or privatized.

The outcome will determine the makeup of the small but vital firefighting crew manning special, foam-blowing equipment, which is the first on scene to suppress fire when a plane crashes.

After a contested bidding process earlier this month, the John Wayne administrative staff is moving to have a five-year contract awarded to Wisconsin-based Pro-Tec Fire Services after the company submitted a bid of about half that from the Orange County Fire Authority, which now staffs the service.

Meanwhile, the Fire Authority board — representing 22 cities — is set to decide at its next meeting on Sept. 26 whether to go to court to try to keep the service it has provided since 1995, say officials; they declined further comment.

Under the current operating scheme, a county report estimates the five-year contract labor costs for airport firefighting at $23.6 million. For the new contract, the Fire Authority bid $22.6 million, while Pro-Tec bid $11.8 million.

The advisory John Wayne Airport Commission could have taken the Pro-Tec contract up on Sept. 18, but airport officials opted to wait.

The county Board of Supervisors, whose members have already indicated a strong preference for Pro-Tec’s cheaper bid, will make the final decision on the contract.

This is the latest of several efforts in recent years by local Republican leaders to replace public firefighters or paramedics with private contractors.

For instance, the county Health Care Agency in August approved a private paramedic service to perform interfacility transport of critical patients, arguing it reduces overcrowding at hospital emergency rooms. Union leaders, meanwhile, said the county was essentially reducing the level of care by setting up a parallel 911 system.

Those who argue in favor of privatizing emergency services have insisted that entities can receive the same level of service at a significantly lower cost, because they aren’t paying the relatively high salaries and benefits of public firefighters and paramedics.

Those against privatization have argued that private emergency medical services do not provide the same level of service and that the firms are able to operate with little public oversight.

Beyond the ideological arguments, a central question in this case is whether John Wayne’s squad of 18 firefighters dedicated to runway emergencies is adequate given that the airport is becoming increasingly busy.

John Wayne would be one of the largest served by Pro-Tec, which staffs a dozen, mostly smaller airports nationally. Among the similar or larger Pro-Tec facilities are Will Rogers World Airport in Oklahoma City, Okla.; Austin Straubel Airport in Green Bay, Wis.; and Burbank Bob Hope Airport, the firm’s only California location.

Airport administration representatives at two airports — Bob Hope and Will Rogers — said Pro-Tec meets or exceeds the requirements of the Federal Aviation Administration. They acknowledged, however, that they didn’t remember any performance audits ever being done on Pro-Tec’s service.

Interviews with firefighters in Burbank indicate the firm has had contentious relationships with its workforce.

Among the allegations by firefighters are morale issues, high staff turnover and strained relations with firefighters from nearby public agencies, who also respond to save plane crash victims. They also noted that most of Pro-Tec’s employees are military veterans.

“Its really sad,” said Lew Stone, a Burbank Fire Department captain who retired after 30 years, much of it working at the city’s station near the airport. “It’s a constant battle in a poor work environment.”

Pro-Tec is the “strip mine” of airport firefighting, said Victor Burch, former head of the firefighters union at Bob Hope, where he was fired in December 2011 after what he described as a 20-year positive career. The Air Force veteran is fighting the discharge, which he describes as retaliation for union service.

Carl Theim, Pro-Tec’s operations director in Green Bay, was contacted by Voice of OC but refused to comment, referred inquiries to John Wayne officials and hung up. Airport officials declined to comment on the issues.

A Bob Hope spokesman said the facility’s three-city board has been satisfied with Pro-Tec.

The FAA sets minimum standards for operations and for firefighting equipment, highly sophisticated vehicles requiring only one firefighter per vehicle to blow billows of foam to extinguish or prevent fire around and in an aircraft.

The Fire Authority and other firefighting services near airports said this means public agencies responding to a crash disaster would do most of the passenger rescue and extraction operations.

Stone said that twice in the last two decades, efforts were launched at Burbank Bob Hope upgrade fire service, but the efforts failed, largely because of resistance by airlines.

“The airport firefighters try to do the best with short resources, but they are hamstrung by the economics of Pro-Tec,” said Stone, who is secretary-treasurer of California Professional Firefighters, which represents 30,000 personnel statewide.

At John Wayne, Bruce B. Junor, a 12-year member of the Airport Commission, said he couldn’t recall any effort to expand firefighting services at John Wayne Airport.

“We’ve not seen a need,” said Junor, a former private pilot from Tustin. He acknowledged that airlines at John Wayne have thwarted fee increases to cover such costs. Because of passenger complaints, improving the speed of baggage handling now is the priority, he added.

John Wayne, however, has added equipment and facilities to keep pace with FAA requirements.

In 2005, the airport built a $6-million fire station that had the space and capabilities to handle new equipment. And in 2003, with a federal grant paying 80 percent of costs, the airport purchased a foam-blowing rig for about $1 million. Last year, it bought a $235,000 command vehicle.

But in 2000 a fire station shared with the Newport Beach Fire Department on the west side of the runways was significantly damaged by fire. That facility, which housed an engine company, wasn’t replaced.

In an August report to supervisors, John Wayne officials rejected the creation of an airport fire service costing $20 million over the next five years.

“Airport authorities just look at the cost,” said Stone. “There is virtually no consideration of the traveling public.”

In an Aug. 20 letter to the Board of Supervisors, the John Wayne Airport Airlines Affairs Committee representing the 12 carriers that fly there strongly favored the Pro-Tec bid, citing its lower cost.

“It is difficult to understand why any entity, public or private, would choose to burden its budget with unnecessary and avoidable costs of this magnitude,” wrote Steve Hubbell, chairman of the committee.

The answer to that is simple: experience and quality resources, said Cliff Bramlette, who oversees the Fire Authority’s airport service.

Indeed, the Fire Authority was ranked higher in the airport’s bidding process on qualifications, safety, experience and responsiveness.

The Fire Authority had challenged Pro-Tec’s bid award, arguing that the firefighting crew is not a special service, so awarding the contract to a private entity is a violation of the state Government Code. That argument was rejected by county attorneys, and the challenge ended on Sept. 4.