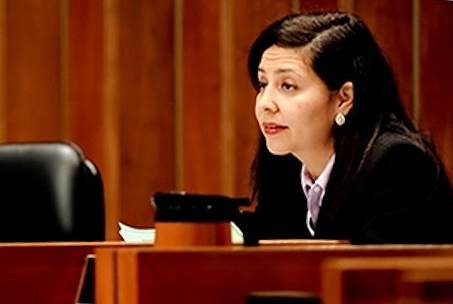 Former Santa Ana Councilwoman Claudia Alvarez voted in favor of a proposed apartment complex after the complex’s developer paid $5,000 for a legal opinion concluding that Alvarez could run for an unprecedented fourth term, according to a developer’s expense report submitted to the city.

This revelation was included in the same expense report handed over to the city by Barry Levine, a former investor in the project, that raised suspicions regarding an alleged illegal gift or possibly an illegal campaign contribution to Councilwoman Michele Martinez.

The expense records could both resolve a long-unanswered question regarding the funding behind Alvarez’s quest to stay on the City Council and raise additional questions having to do with whether she broke campaign finance laws.

They show that the apartment complex developer, Vineyards Development Corp., made a payment Oct. 25, 2011, to the Washington, D.C.,-based law firm Sullivan & Associates, which prepared an “opinion letter for City of Santa Ana Council Claudia Alvarez,” the report states.

Depending on the circumstances, Alvarez would have been required to report the payment as an in-kind contribution to her campaign committee, according to Bob Stern, president of the Los Angeles-based Center for Governmental Studies.

Public campaign filings show that Alvarez did not report the payment.

And if the payment counts as a campaign contribution, then it would have been illegal under city law. In Santa Ana, the maximum contribution limit from any one entity is $1,000.

Also, Alvarez’s two subsequent council votes to approve the 271-unit development, dubbed “The Met at South Coast,” would have broken city law, which states that council members must abstain from voting on matters affecting campaign contributors for at least 12 months after receiving contributions totaling more than $250.

But those violations hinge on whether Alvarez was required to disclose the payment as a campaign contribution, which is a tricky question. If Alvarez knew that the developer was behind the payment, then she likely would have had to show the payment on a public campaign filing, according to Stern.

“It raises enough questions that somebody should be looking at the circumstances behind the opinion as to what was her involvement with it,” Stern said.

Regardless of what the official response may be, the Alvarez revelation adds to mounting questions regarding corruption at Santa Ana City Hall.

Last month, Voice of OC reported that in 2011 Mayor Miguel Pulido voted for a $1.35-million no-bid city contract with a local auto parts store just over a year after he and members of his family purchased a home from the owner of the store for $230,000 less than its fair market value.

Within days of that article, a former investor with The Met project submitted a packet of records at a council meeting that he said proves corruption at City Hall.

Ryan Ogulnick, president of Vineyards Development, had at first said that he believed the expense report was doctored. He later retracted those remarks, saying only that the report isn’t a valid document.

A similar expense report filed in a court battle between Ogulnick and Levine is missing the page that would show the payments to Geisha House and Sullivan & Associates, Voice of OC found in its attempt to determine the veracity of the report.

However, in response to Ogulnick’s claim that the document isn’t authentic, Levine forwarded to Voice of OC what he said was the original email chain with the court-appointed receiver, which includes the expense report as an attachment. In the email, the receiver wrote that the expense report came from the developer.

When asked about the payment for the legal opinion listed on the expense report, Ogulnick said he couldn’t recall that expense. He said the only term limits issue the developer was involved with was Measure GG, which placed a term limit on the mayor’s seat.

Alvarez, a deputy district attorney and currently an elected trustee at the Rancho Santiago Community College District, was the council’s most vocal supporter of The Met project.

She motioned for and voted twice last year — at the March 19 and April 16 council meetings — to approve the apartment complex just over a month before city resident Max Madrid attempted to submit the Sullivan & Associates legal opinion to the city clerk.

Last year’s failed effort to gain Alvarez a fourth term followed 2008’s successful campaign to pass Measure D, which extended the then two-term limit for council members to three four-year terms. The only council member at the time to be termed out was Alvarez.

Bob Bisno, who is also Ogulnick’s attorney, heavily financed the campaign for Measure D, which was run from Alvarez’s home. The ballot measure was presented to residents as a check against the powerful influence of special interests.

Going into the 2012 election, Alvarez — again the only termed-out council member — tried to gain another four years on the council. But the city clerk barred her from filing to run, citing the council term limit.

Madrid then attempted to submit a legal opinion from Sullivan & Associates, dated May 24, 2012, which argued that because of Measure D, Alvarez was by law ending her first term in office, not her third.

Madrid sued the city and demanded that Alvarez be allowed to run for another council term. He lost the suit.

In July last year, Alvarez said she had conducted an investigation at City Hall regarding City Clerk Maria Huizar’s refusal to allow another council run and concluded that Huizar conspired with other council members to bar her from running for another council term.