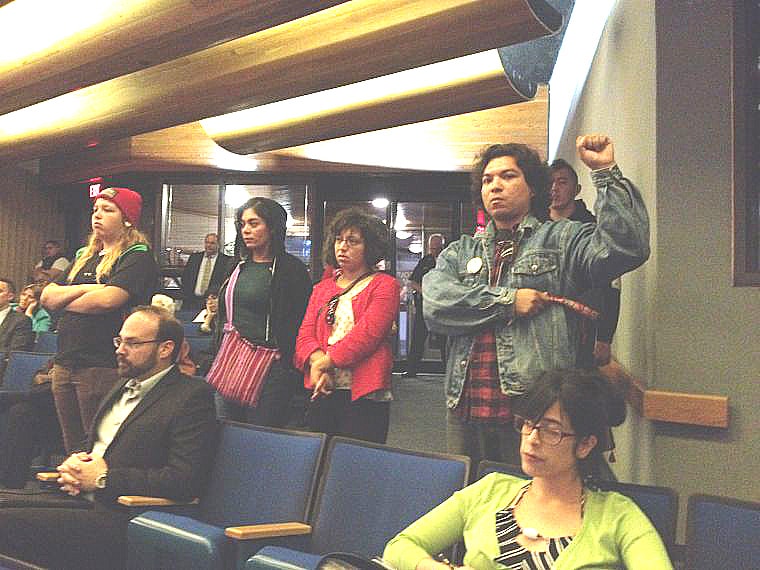 Close to 20 protesters, angry about Anaheim’s latest police shooting and a councilwoman’s remark that the killing “saved us a trial,” unleashed their outrage at Tuesday’s City Council meeting.

They were protesting last week’s killing of 21-year-old Robert Moreno Jr., who according to news reports opened fire on police officers and wounded a police dog. Moreno’s was the first such killing since police shot and killed Latino men on consecutive days in the summer of 2012, which led to protests that erupted into a downtown riot.

Exacerbating the anger was Councilwoman Lucille Kring’s statement last week on a neighborhood message board that Moreno’s killing saved the city a trial, which is “always a good outcome.” She later apologized for the comment, repeating that apology at the beginning of the meeting and retracting the statement.

Mayor Tom Tait, who is facing Kring in his reelection campaign for mayor, said her comments disregarded respect for individual rights to due process under the law and “shouldn’t have been made.”

“I’m somewhat disturbed for the lack of reverence for the loss of human life, any life, regardless of the circumstances,” Tait said. “I can tell you as mayor, this is not the opinion of the city. The city does respect all life. And I think it’s important now that the city come together, that we support one another.”

Two of the public speakers — one of them a mother of a police shooting victim planning to run for City Council and the other a district attorney candidate — asked Kring to resign over the comment. Teresa Smith, whose son Caesar Cruz was shot and killed by police in 2009, asked Kring how she would feel if she was informed that her child had died.

“There’s nothing in the world worse than hearing those words. And to be so insensitive to that, it just amazes me,” Smith said. “You just don’t care about human life.”

Throughout the public comments portion of the meeting, angry residents stood in the back of the council chambers, heckled city leaders and protested the city’s Police Department.

The outrage dramatically spiked after council gadfly James Robert Reade mocked Latino gang behavior and alleged that one of the protesters, Sonia Hernandez — whose brother, Martin Angel Hernandez, was killed in a police shooting — was a gang member and referred to a 2014 “gang war.”

Reade’s rant sparked angry reactions from others in the chambers. The next speaker claimed that Reade had slandered Hernandez. Then, when Tait said freedom of speech for Reade and everybody else was protected, the speaker repeatedly shouted “[expletive] the police” into the microphone.

The residents said they had formed an “Anaheim Cop Watch” group, which will be filming police officers on patrol. One of the group’s organizers asked the council for assurance that they would not face retaliation from police officers.

Up until now, most of the media coverage of the shooting has focused on the fate of the injured police dog that police allege was shot by Moreno.

At the end of the meeting, Kring briefly remarked that the loss of any human life is “sad,” and then went on for much longer about Bruno the dog, saying she had participated in a march for him over the weekend and met the dog’s handler.

“Thank God for Bruno, because if it hadn’t been for him, the possibility of three Anaheim police officers being shot and killed was a very real thing,” Kring said.

Kring’s previous comments, as well as the intense media coverage of the dog’s injuries, added to the outrage of some protesters.

For another protester, the shooting opened up anger over the run-down condition of her neighborhood, despite the city being home to its teeming resort district.

“We’re one of the richest cities in this country, so why is my neighborhood and everyone else’s neighborhood still run down?” said 18-year-old Olivia Frida Cortez, a resident of Balsam Avenue in central Anaheim. “I don’t know none of you guys live in the hood. … You guys will never understand, because you’re not coming from our side.”

Beyond Kring and Tait, council members had little to say in response to the crowd.

Councilwoman Kris Murray said that the city should “come together” in the wake of such tragedies and support its neighborhoods and police officers, “who put their lives on the line every day.”