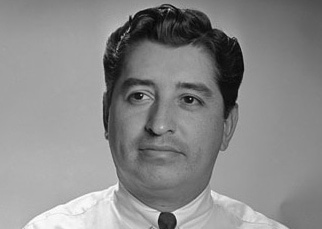 Los Angeles Times investigative reporter Ruben Salazar, a Santa Ana resident who closely documented the Chicano movement of the 1960s and early ’70s, became an iconic figure to many in the Latino community after his 1970 killing by a sheriff’s deputy.

That legacy was very much alive Thursday night as local students, officials and others packed a screening of a new documentary about Salazar, slated for broadcast nationwide later this month on PBS.

“Ruben Salazar was one of those people in our history that was intentional in bringing light to injustices” and bringing the facts forward, said Santa Ana City Councilman David Benavides, who presented a city proclamation to Salazar’s daughter.

The screening of “Ruben Salazar: Man in the Middle” was hosted by PBS SoCaL and held at Santa Ana College.

The film delves into Salazar’s life, including his years as a Los Angeles Times reporter covering the Vietnam War, a stint as Mexico City bureau chief and his groundbreaking coverage of police brutality and activist movements in East Los Angeles:

Salazar was killed on Aug. 29, 1970, during the National Chicano Moratorium March against the Vietnam War in East LA, after being struck in the head by a tear gas canister shot by a sheriff’s deputy.

“It’s about time that someone like Ruben Salazar got the attention” for all he did in his life, Rogers told attendees.

Following the screening, a group of panelists addressed the reporter’s legacy and took questions from the audience.

Voice of OC Editor-in-Chief Norberto Santana Jr. said Salazar’s hard-hitting approach helped pave the way for aspiring reporters like himself to succeed in the industry.

“I think without a doubt he opened up more doors for journalists, especially Latino journalists,” said Santana.

He added that Salazar set a high bar, going beyond he-said, she-said reporting to really penetrate the issues of his day.

Yet that type of journalism also sparked angry warnings from police to stop, according to witness accounts in the film.

Director Phillip Rodriguez lamented that while Southern California is home to a rich mix of ethnicities, much of what the nation sees about it is from sitcoms and shows like Baywatch.

He encouraged local residents to make their histories “part of the American narrative,” adding that it was a major goal of making the film.

Producing the documentary had its fair share of challenges, Rodriquez added.

Los Angeles County officials refused to hand over their investigatory records of Salazar’s killing, so Rodriguez and his team successfully sued the Sheriff’s Department in order to gain access.

“It really is an amazing thing that you all have the right to do,” he said.

The documentary premieres Tuesday, April 29, at 9 p.m. on PBS SoCaL and will air across the nation that evening on PBS stations.