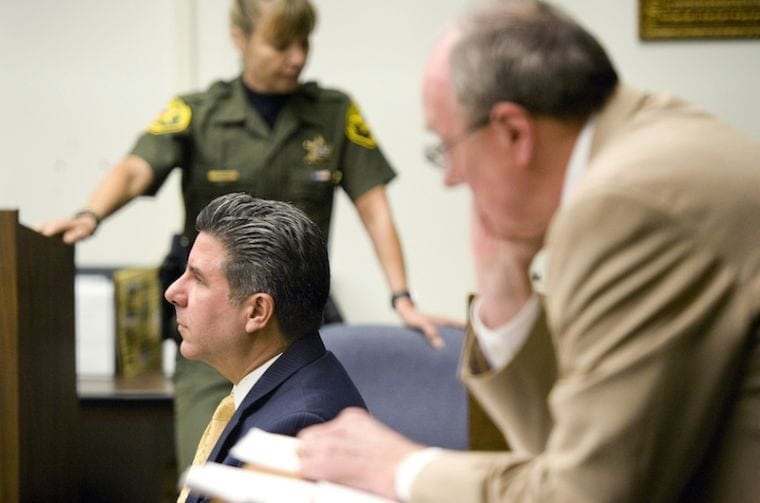 In his ruling, Makino decided Bustmante would not stand trial on five counts of felony false imprisonment and three counts of assault with intent to commit a sexual offense.

For the false imprisonment counts he dismissed, Makino said he believed the evidence shows “there is no violence, menace or deceit” by Bustamante.

And for the assault charges he dismissed, Makino found that prosecutors failed to show Bustamante intended to perform violent or forcible acts or that the alleged victims were under duress.

DA prosecutors declined to comment after the ruling, as did Bustamante’s attorney.

The ruling came at the end of a six-day preliminary hearing during which several alleged victims testified that Bustamante engaged in sexual acts against their will.

Prosecutors say Bustamante systematically targeted at least seven vulnerable women working under him at the county Public Works Department, stalked them and then sexually terrorized them.

Several of the alleged victims said they were fearful of reporting Bustamante’s actions due to his influential relationships with top county officials, a point underscored by prosecutors on Tuesday.

“If even [then-Public Works Director] Jess Carbajal…felt at times powerless at times to control Mr. Bustamante – given his connections, his power, his authority at the office – one can only imagine what it must have felt like to Jane Doe C” and other victims, said Deputy District Attorney Aleta Bryant.

“Mr. Bustamante’s weapon was one of duress, one of wearing down women who made it apparent to him that they were not willing and not desirous of contact with him of a sexual nature, who told him that repeatedly” and he didn’t care to honor, said Bryant.

Bustamante “was persistent,..he was persuasive, and they agreed to have intimate relations with him” because of that, said Riddet.

For hugs to be charged as felony false imprisonment is “absurd,” said Riddet.

Such felonies are “a gross mischaracterization and most gross over-filing of the charges,” he added.

Regarding the stalking charge, Makino agreed with Riddet’s concerns about statements made by prosecutor Bryant to the alleged stalking victim.

In a recorded 2012 interview with the alleged victim, Bryant said “I’m still thinking about a stalking charge here,” and “I personally think that he’s guilty of criminal acts against you.”

“I agree, it’s a problem,” said the judge. “But it’s not a problem that I need to deal with here.”

It might require some “potential action” by the court in the future, he added.

In his ruling Tuesday, the judge also warned of other potential problems regarding some of the charges he let stand.

For the grand theft charge, in which prosecutors say Bustamante stole more than $3,000 from the county, Makino said he saw a “a substantial issue” regarding whether, as prosecutors allege, Bustamante illegally received tuition reimbursement.

Prosecutors argued Bustamante convinced then-county CEO Tom Mauk to approve $8,400 for a Harvard program only if Bustamante would cover any costs above that amount.

Bustamante was also required by the county to sign a statement saying he was “personally responsible” for $3,500 of the program’s tuition, prosecutors alleged.

But after returning from the program, Bustamante sought and received tuition reimbursement covering an amount above the $8,400 approved by Mauk.

“Essentially he manipulated the county personnel to essentially get over $4,000 out of the county” that “he should not have received,” said Deputy District Attorney Brock Zimmon.

Defense attorney Riddet, meanwhile, argued that Bustamante was entitled to use the money for the program.

“This was according to the rules, his money, and he could use it in any way he chose,” said Riddet.

Under questioning from the judge, prosecutors indicated they hadn’t verified the county’s written policy on tuition reimbursement.

If county officials were each given an allotment of tuition reimbursement, the judge said it’s hard to show a person had intent to steal.

But for the roughly $975 in meals where Bustamante allegedly got illegal reimbursements because they were already covered in tuition, Makino said he did believe that was “not permissible.”