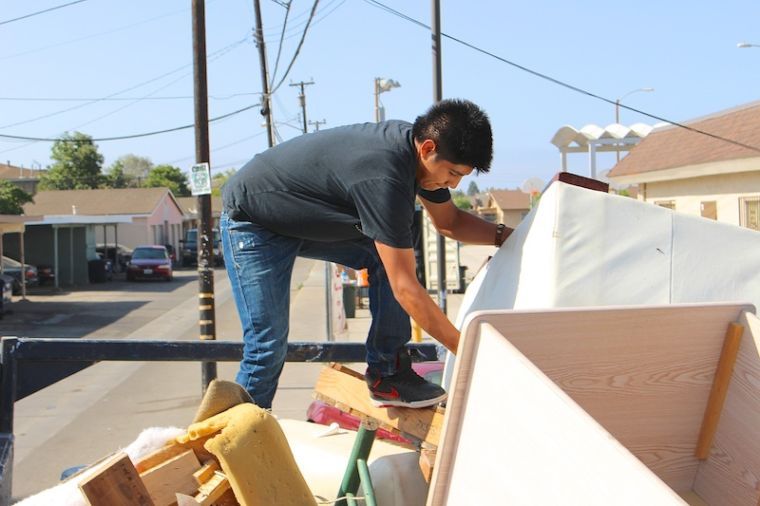 By 8 a.m. on the last Saturday in May, early risers had dragged chairs, shelves and mattresses to a dumpster temporarily stationed in the Oak View community of Huntington Beach.

The trash haul was on.

Among those bearing refuse that morning was Rosendo Guzman, who scaled the dumpster wall and gingerly stepped across the jagged heap of discarded items to guide his old sofa to the top of the pile.

“We had to get rid of it,” the 18-year-old explained – but not to make way for a new one. Rather, the couch wouldn’t fit in his two-bedroom apartment, with eight people living there.

Guzman’s predicament – highly crowded living apartment living – is nothing unusual in Southern California’s low-income neighborhoods. Voice of OC has documented some of the serious health issues that can result from it, including abuse from strangers, unsanitary conditions, and exposure to numerous asthma triggers.

In Oak View, the monthly clean-up efforts that draw residents like Guzman show how the problems of living in densely packed apartments can spill out into the surrounding streets. There, they take the form of excess trash and, frequently, dumping of furniture in alleys.

It’s a problem that officials from cities throughout Orange County acknowledge.

“Do we have dumping in the alleys? Yes we do, we have it daily,” said Pedro Guillen of Santa Ana’s Public Works Agency.

Furniture, tires and oil are the commonly left, and they can sometimes block traffic, he said. The city holds alley clean-ups four times a month and contracts for the disposal of oil and other materials. In addition, residents can schedule heavy trash pickups at no cost.

In Los Angeles, a new effort is underway to clean up alleys. Some cities are even turning alleys into creative or green spaces.

A Symptom of High Turnover

It’s reasonable to assume that one reason for the dumping of so many furniture items is the often transient nature low-income communities, said Victoria Basolo, UC Irvine professor of urban planning.

“When you move you leave stuff,” Basolo said. “High turnover in residential living is associated with poorer households. They have what we call residential instability….It’s a domino effect. You lose your job, lose your apartment or vice versa. You cannot separate those two.”

Housing experts in Orange County say it’s common for people renting in poorer neighborhoods not to have a standard lease, thus fostering turnover. Also, families dealing with job loss sometimes move temporarily into a room within an apartment until they can find something better.

Yet, public works authorities say they can never know for sure who is dumping items and why.

Some officials say that dumpers simply want to avoid paying for pickup, though these services are generally available for free. Others believe that residents lacking English skills and savvy about city governance don’t know what services are available.

One of the more creative theories is that many of the women in lower-income communities who work as maids are sometimes the beneficiaries of hand-me-down furniture from their employers, thus explaining the furniture refuse.

Another way crowded living manifests itself at the street level is in parking.

Ruben Reyna, who works in the neighborhood at an afterschool tutoring program, attributed the need for permits to congested living: “It’s probably just the high population. It’s really condensed and people are living in multiple apartments with few spots.”

Reyna and others who live or work in the area said the closure of nearby Shalimar Street, which police did in the 1990s to reduce gang activity, has aggravated parking shortages in the already crowded streets nearby.

“From about 20 years ago, the area was really bad. Lot of drug pick up, gang drive-bys,” Reyna said. “[The city] ended up closing the street and made it illegal for anybody to park.”

Raja Sethuraman, Costa Mesa’s transportation services manager, said it’s not clear how much Shalimar is playing a role and suggested that overflow parking comes instead from the usual suspects.

“On the other side of Placentia, there are multi-unit housing apartments. It is probably coming from there,” Sethuraman said.

One neighborhood resident who declined to give his last name, Alex, admits he is one of those who parks on Center Street because there is not enough parking in his complex.

“I had two tickets,” Alex said. “I need to move out because I don’t have parking. Too many people.”

Meanwhile, Estela Silva, who works in the neighborhood and generally struggles to find parking, also cited congestion as a factor. “There are a lot of cars, a lot of people living in one spot,” she said.

During the cleanups in Oak View, residents work alongside a crew of volunteers from different philanthropic organizations to sweep and pick up street trash. Clean-ups have taken place over the last several years but they became regular monthly events five years ago.

Helping to organize the clean-ups and arrange for the dumpster, tools, materials and volunteers is the Oak View Renewal Partnership, a nonprofit community organization. The partnership estimates that in the last five years, residents and volunteers have disposed of as much as 300 tons of trash.

Usually about 75 people in all assemble at 8 am, grab rakes and dustbins, split into groups and comb the one-square-mile community’s streets and alleys, filling sacks for pickup.

The dumpster is provided at no charge by Rainbow Environmental Services, a waste management company that hauls the dumpster away, disposes of the items and picks up special garbage bags left at designated corners during the cleanups.

With a six-ton capability, the dumpster was nearly full when workers arrived for the recent clean-up.

Gabriela, of Oak View, was happy to leave a mattress at the dumpster last Saturday. She said the alternative would have been to try to break it in pieces and bag it.

“I don’t want to leave it in the street,” she said, shaking her head. She said trash and dumped furniture in the streets create a bad environment for kids.

Robert Tapia, who grew up in Oak View and now works in community outreach at nearby Ocean View High School, said trash and dumping have always been problems in the neighborhood.

The theory says that when physical surroundings deteriorate or are allowed to go without repairs, both insiders and outsiders to a community receive a message that the place is not worthy of upkeep, and people are more prone to treat it carelessly or even intentionally violate it.

It is the Saturday cleanups that have kept the broken windows theory from taking effect in Oak View, Tapia said.

“[It] is a beautiful thing to see,” Tapia added. “This is a humble place, but we’re proud.”

Amy DePaul is a Voice of OC contributing writer and lecturer in the University of California, Irvine Literary Journalism program. You can reach her directly at [email protected]

Thao Ta is a literary journalism student at UC Irvine.