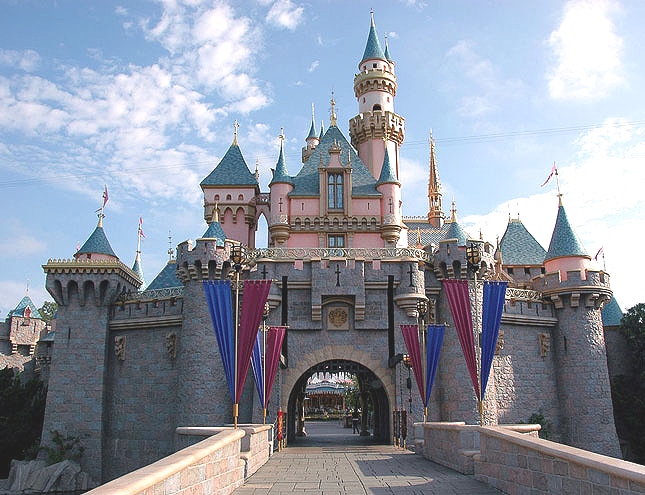 Always a big player in Anaheim elections, Disney is outdoing itself this year — pouring at least $671,000 into political action committees financing city council campaigns and tens of thousands more into an initiative aimed at changing the city’s electoral system, according to a Voice of OC analysis of campaign finance data.

Why Disney is dispensing cash with such largesse is in many respects a matter of speculation as Disneyland officials rarely, if ever, talk politics on the record.

Some say its because Disneyland, the so-called “Happiest Place on Earth” wouldn’t be so happy if Anaheim’s current business-friendly council majority were to be upended, which is a distinct possibility given that it is far from certain that Republican councilwomen Kris Murray and Gail Eastman will be among the top two vote-getters.

Their challengers include James Vanderbilt, who is backed by Mayor Tom Tait, the council majority’s chief nemesis; and Anaheim City School District Trustee Jose F. Moreno, one of the city’s most influential Latino voices.

Murray and Eastman did not return phone calls for comment.

The save-the-council-majority theory is certainly buttressed by a detailed look at Disney’s campaign spending.

(Click on the image below or this link to see a larger version.) 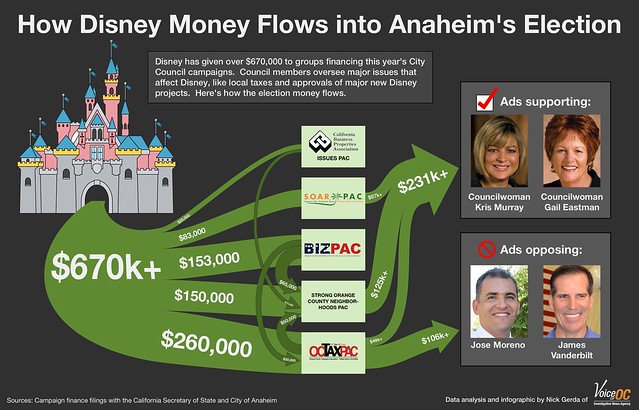 Various political action committees, or PACs – including those connected to the Orange County Taxpayers Association, Orange County Business Council, The Support Our Anaheim Resort and Strong Orange County Neighborhoods PAC – have spent $500,000 in the races.

At least $260,000 of Disney’s spending went to OCTaxPAC, which has spent more than $80,000 on attack ads against Moreno and Vanderbilt.

Listening to Moreno talk, it’s certainly clear why Disney sees him as a threat.

In an interview with Voice of OC, he said “working poverty” is the most dire issue facing neighborhoods and talked about shifting the focus of government subsidies from hotels and light-rail to things like child day-care for families.

Moreno has even floated the idea of a Disneyland gate tax, whereby every visitor would be charged an extra dollar to help pay for government services.

“We have to come up with a solution so families in working poverty can have a basic quality of life that does not exist right now for too many families in the city of Anaheim,” Moreno said.

Carolyn Cavecche, the CEO and president of the Orange County Taxpayers Association, said she couldn’t speak to why Disney is spending so much.

But she said the taxpayers association is opposed to any candidate who would tamper with Proposition 13, the initiative that kept property tax bills from skyrocketing as values increased, and that Moreno has gone on record as saying he would be open to changing the law.

“Candidates who have expressed even an interest in weakening proposition 13 are not those we are interested in having in local office,” Cavecche said.

Moreno countered that city councils have no control over state laws and that such an argument from Cavecche is a “red herring.”

“At the end of the day, for OC Tax to say a city council race has anything to do with prop 13… that’s a state issue,” Moreno said. “I’m surprised Carolyn Cavecche, a former Orange mayor, wouldn’t know that.”

Meanwhile, like Tait, who is also up for re-election, Vanderbilt is against the proposed $319-million streetcar project, which could be a boon for Disneyland.

Tait advisor John Lewis told the Orange County Register that Disneyland is keenly interested in making sure the city’s proposed streetcar project stays on track. The light-rail system would deposit riders at the park’s front gate.

Lewis also contends that the Disney spending is done in coordination with unions, major hoteliers and other big businesses in the city in a bid to control the city council. He questioned whether any business in the country has spent as much as Disney has on a city council race.

“It’s unbelievable,” Lewis said. “I’ve never seen anything like it.”

Tait has opposed massive tax subsidies for politically connected businesses, and he is backing Vanderbilt for council. He called Disney’s massive spending “unhealthy” for the city.

“That kind of money would steamroll over any candidate that attempts to go against it,” Tait said.

Murray’s personal relationship with government relations chief Carrie Nocella could also be a reason, some insiders say. Nocella is known to be close friends with the councilwoman.

Disney representatives did not return a call seeking comment.

Another big factor in this election is an initiative that, if passed by voters, will by 2016 transform the city’s current at-large electoral system to one where council members are elected by district.

The current at-large system is considered easier to control through expensive campaigns using a flood of glossy mailers, making Disney’s financial muscle among the most powerful factors impacting council races.

“Once you have district elections, it will be a lot tougher for anybody to buy council seats the way they do right now,” Lewis said.

Disney supports the district elections ballot measure, but perhaps only grudgingly so because the megaresort doesn’t want to be seen as opposing representation for Latinos and better democracy, many insiders speculate.

Finally, there is the theory that widespread voter apathy has made it all the more difficult to get a message out, which in turn has made campaigns more expensive.

Less than 25 percent of eligible voters cast ballots in the June primary, and, according to Corless, a dismal turnout is also expected in the November general election.

“Groups and individuals have had to invest more into their campaigns for persuasion and voter turnout because of an electorate that is either disengaged, or disenchanted with the current political system,” Corless said.

Correction: A previous version of this article misstated the amount spent by OCTaxPAC on against Anaheim City Council candidates James Vanderbilt and Jose F. Moreno. We regret the error.