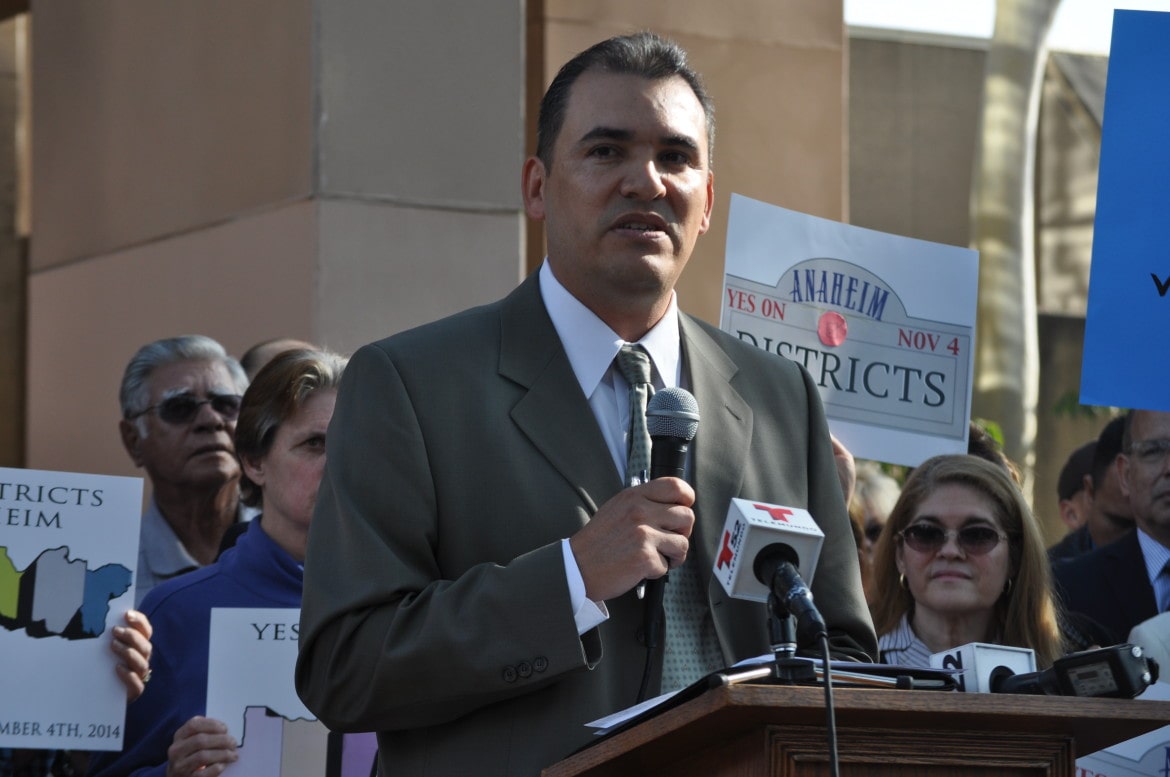 Jose Moreno speaks at a rally to celebrate Anaheim's decision to allow voters to decide on implementing a new city council electoral system expected to give Latino neighborhoods representation on the council.

A prominent advocate for Anaheim’s Latino residents is alleging the Orange County Register has excluded him and other community voices from the newspaper’s coverage of the proposed ticket tax deal between the city and Disneyland.

The proposal, which the Anaheim City Council will vote on during its regular meeting Tuesday, protects the mega-resort from a possible tax on tickets for up to 45 years, in exchange for promises of as much as $1.5 billion in new investment at the park.

It is a controversial proposal that supporters call a job creator but critics say is yet another giveaway to a multi-billion dollar corporation at the expense of residents.

Members of the council’s Disney-friendly majority have already said they’ll vote in favor of the proposal, while Mayor Tom Tait has indicated he will vote no on the grounds that it would tie the hands of future councils confronted with hard economic times.

Jose Moreno, meanwhile, is considered by many to be Anaheim’s most high-profile proponent of ticket taxes on entertainment venues. As president of Los Amigos of Orange County and a former council candidate, he’s argued such taxes could be used to bolster services to the city’s underserved neighborhoods.

When Moreno got wind of the Disneyland proposal on June 24, he immediately began reaching out to local reporters who cover Anahiem to make sure they new about it. His first call was to Art Marroquin, The Orange County Register’s Anaheim reporter.

Marroquin told Moreno he hadn’t heard about the proposal, thanked him for the tip and said he would be on the story early in the morning, Moreno said. Marroquin also promised to call Moreno back the next day after the story was verified, Moreno said.

“I was bewildered by that,” Moreno said of Marroquin’s response that he didn’t know about the pending deal. “I asked him several times, ‘you knew nothing?’”

The next morning, just before noon, the Register posted an article online about the deal, including interviews with officials from the city and Disneyland, a former Disney Imagineer who designs attractions, a theme parks blogger and a financial analyst.

The article didn’t include any comments from Moreno nor other local community activists.

Marroquin and Moreno would talk again the next day, and the reporter quizzed Moreno on how the activist managed to get his cell phone number, Moreno said. Moreno added that Marroquin also asked him about whether he knew about any existing ticket tax proposals.

Moreno said he told Marroquin about how “frightening” it is that council members were briefed secretly about the deal and kept it from the community. Marroquin “just listened and said ‘yeah it’s crazy, yeah, yeah.’”

Still Moreno’s comments didn’t appear in the Register stories about the deal.

Then Voice of OC obtained an email between city officials (which it shared with Moreno) showing they were scheduled to brief Marroquin and reporter Joseph Pimentel about the deal just hours before Marroquin had told Moreno he knew nothing about it.

Moreno said he sent two emails to Marroquin and left him phone messages to try and clarify what happened.

“I am reaching out with due respect for you,” Moreno wrote in one of the emails, which he provided to Voice of OC. “I just received a forwarded email that implicates you and Joseph Pimentel as having been briefed on Wednesday afternoon by the city of Anaheim on the Disney Tax Resolution Agreement. Art…Did you lie to me about not knowing anything on Wed nite?”

Moreno now suspects that the Register and Disney had an embargo agreement regarding the story, and is wondering whether that agreement included shutting out a neighborhood critic of the deal like Moreno.

Moreno is accusing the newspaper of “lying about what it knows” to him, having “muffled and muted community voices” and then “providing one-sided propaganda pieces to beat the drums for critical policy that’s going to impact generations to come.”

“It’s been hard to examine the merits of the policy because we can’t trust what we’re reading in the newspaper,” Moreno said. “If we can’t trust our local reporters to tell us what’s going on, and be honest with us, what does that say about where we are in Anaheim and in Orange County?”

When a Voice of OC reporter solicited opinions on whether Moreno’s conclusions regarding Marroquin have merit, he received conflicting responses.

Al Tompkins, senior faculty for broadcast and online at The Poynter Institute in Florida, said it’s impossible to know what was said between Moreno and the reporter, so Moreno’s story should be taken with skepticism. It could be as simple as a misunderstanding of the conversation, he said.

“Moreno may just be upset that he wasn’t quoted. So who knows what happened, if anything,” Tompkins said. “Short of some evidence that would be damning, I don’t know what your story is on this.”

Tompkins also said he found it unbelievable that Disney could manipulate the Register into agreeing not to quote Moreno in the story.

But closer to home, a longtime critic and documentarian of the newspaper’s foibles says avoiding a critical Latino voice and pleasing Disney is staying true to years of Register tradition.

“The Register still thinks that Disney is God and will have reporters who seem to lap up to the myth of Disneyland being this benevolent entity in Anaheim,” said Gustavo Arellano, editor in chief of the OC Weekly and an Anaheim native. “Any voices that could be possibly critical of that line are going to be shunned.”

As for whether the Register could have made a deal with Disney to keep Moreno out of the coverage on the deal, Arellano said: “when it comes to Disney, anything is possible.”

Moreno is certainly one of the most vocal critics of Anaheim’s business establishment and has drawn the ire of Disney.

He was a plaintiff in the American Civil Liberties Union lawsuit that forced Anaheim to implement a new council elections system that is expected to give working-class Latino neighborhoods representation on the currently all-white council.

During last November’s election, when Moreno was a candidate for council, mailers from groups financed by Disney attacked him for saying he’d be open to a Disneyland gate tax. And in a column penned for the Orange County Register, the head of a group sponsored in part by Disney made a veiled but still obvious reference to Moreno as a potential council member who would push for a ticket tax.

It’s also no secret that the Register’s top editor has a special affinity for Disneyland.

Editor-in-Chief Rob Curley has said he wears at least one Mickey Mouse garment every day and that he frequents Disney parks “multiple times a month.” Curley’s predecessor, Ken Brusic described him as a champion of “great journalism” and “all things Disney.”

It is rare for an editor-in-chief to write articles, yet the day after news of the ticket tax deal broke, Curley co-wrote a Register article speculating on what new attractions might come with Disney’s $1 billion investment.

Beyond Disneyland, the Register has repeatedly come under fire in recent years on issues relating to its coverage of Anaheim and its business relationship with the city government.

In early 2013, the newspaper changed its ad policy to reject negative political messages with images of politicians after two Anaheim councilwomen complained about an ad slamming them for approving a controversial tax subsidy for a luxury hotel developer.

Yet later that year, the newspaper printed attack ads singling out Tait, an adversary to the councilwomen who complained, with an image of the mayor grimacing. The Register leadership said it was an oversight.

After the policy change, it was revealed that Freedom Communications and Anaheim city government were negotiating a naming rights deal whereby the company would be the broker for securing corporate sponsorships at the city’s transportation hub called ARTIC.

Journalism ethicists had criticized the proposed deal as making the Register look like an agent of the government, and the Columbia Journalism Review upbraided the newspaper in an article headlined “The OC Register’s Transportation Snarl.” Negotiations later collapsed.

Then, later in 2013, the Columbia Journalism Review again criticized the Register (and the Los Angeles Times) for their initially uncritical reporting on an Angel Stadium lease deal framework that would have leased the Angels Baseball team owner 155 acres of public land for 66 years at a price of $66.

The media watchdog singled out Marroquin’s first story on the Angel Stadium lease negotiations as “dutiful, bland and short.”