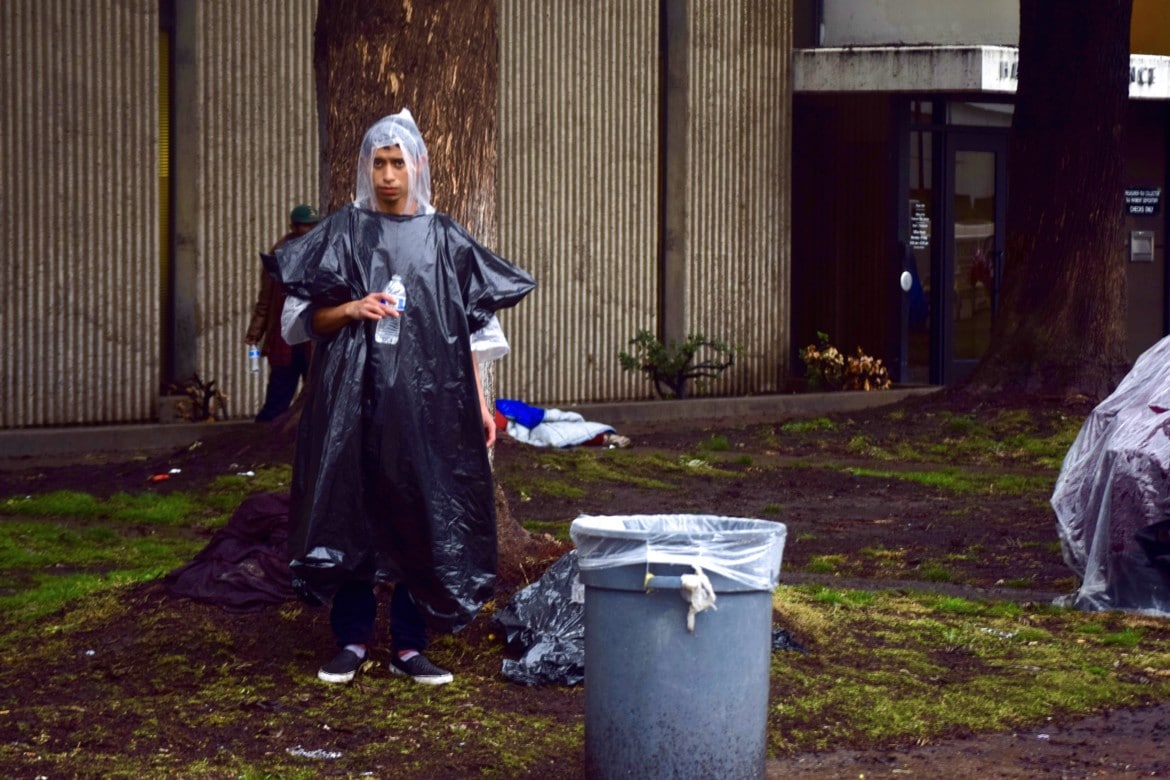 A homeless man stands in the rain at the Orange County Civic Center.

For months, Orange County officials have been warned about the potentially deadly effects of rains this El Niño season, especially when it comes to the hundreds of people who congregate in the Santa Ana River bed.

These concerns seemed to be addressed when county supervisors voted on Dec. 8 to spend $500,000 for an extra 440 emergency shelter beds.

But when heavy rains came a month later, homeless people said they were not warned about any additional shelter space and were told by police that there was no space for them in shelters, because the already-existing armory shelters were full.

That left many people wet and cold during the rains, advocates say, including an 83 year-old woman named Adele.

Adele, who was stuck at the Civic Center without shelter, said her jacket got completely soaked and stuck to her body, leading her to hang out her clothes to dry for a couple of days amid the cold weather, according to Eve Garrow of the ACLU of Southern California.

“When you have a woman who’s 83 years old and presumably frail, stories like that are very scary, of course because people can get hypothermia” when they’re cold and wet, said Garrow, a homelessness policy analyst and advocate with the ACLU.

There was also at least one potential life-and-death situation during the recent rains.

A homeless woman in Garden Grove was swept up and carried by suddenly rushing water in a drainage canal, before being to be rescued by police.

And Garrow said homeless people told her about “losing everything,” as their belongings became completely soaked and moldy.

“My sense is that very little progress has been made in securing additional emergency bed space for an emergency response for people living outdoors during the next El Niño rains,” said Garrow.

Exactly what happened to the promised 440 beds – and how prepared the county is for the next storm – remains difficult to determine.

When Voice of OC asked Karen Roper, executive director of the county’s Community Services department and the county’s point person on homelessness, about the situation on Monday, she issued a statement saying there were about 200 empty beds available during the rains at the county’s longtime armory shelters, as well as transportation services, and referred follow-up questions to county spokeswoman Jean Pasco.

But when it comes to what homeless people were told, Pasco said “we can’t comment on what police officers may or may not have told homeless.”

Supervisor Andrew Do, who has been the most vocal supervisor recently on homeless issues, could not be reached for comment.

When supervisors set aside $500,000 for the beds, they opted to contract it out through a bidding process. The only provider who bid for it was the nonprofit group Mercy House, which has long held the county’s contracts to run the existing armory shelters.

The bidding ended on Dec. 22, with Roper saying at the time that the new contract would be issued this month.

After the rains came – and prompted public pressure on supervisors to act – Supervisor Do publicly urged county staff to act quickly to get the beds in place for the next storm.

“The issue is urgent and the need is here. And we have already experienced the onset of the El Niño storms,” Do Do said at the Jan. 12 meeting.

He asked staff to bring the emergency beds contract to supervisors for approval by their Jan. 26 meeting.

But that meeting takes place today, and the item is nowhere to be found on the agenda. Pasco said she doesn’t know when the contract will go to the board.

In the meantime, the county has issued a $45,000 “emergency purchase order contract” to Mercy House for “start-up costs for expanded temporary shelter beds and increased emergency shelter transportation services,” according to Roper.

It’s unclear whether the purchase order was issued before or after the recent rains.

As for finding space for the 440 promised beds, Garrow said a Mercy House representative told her on Friday that they’re having a lot of trouble finding places to put the shelter beds requested by the county.

“It seemed pretty clear to him that they have the contract and that they’re desperately attempting to attain the bed space,” Garrow said.

Garrow wonders “why the county contracted out this critical health and safety function to a private organization that doesn’t have the authority to open up emergency sites” and is struggling to get cooperation from private and public organizations.

Another homeless advocate, Larry Smith, who goes by “Smitty,” said the county should take a cue from the city of Santa Ana and build a coalition of faith-based groups to help find and purchase shelter properties, which don’t have the same restrictions that government properties do.

“What the city’s doing right now is building a coalition, a collaborative of faith based organizations, and getting them to buy property so that the city an get around all of the barriers that they would have to get around if it was run by an organization or if they did it,” he said.

The emergency beds issue is expected to come up at today’s supervisors meeting, where Garrow and others plan to address county supervisors during public comments. They also plan to deliver a petition calling on supervisors to immediately move to provide the extra emergency shelter beds, which was signed by about 1,000 people.

Garrow said it’s unclear what the county’s back up plan is if Mercy House doesn’t follow through on creating the 440 beds by the next El Niño storm, as well as what the county will do to address the over 2,000 people living outdoors to ensure they have safe refuge when the next storm hits.

“Those are some of the questions, and as of now they’re unanswered,” she said.