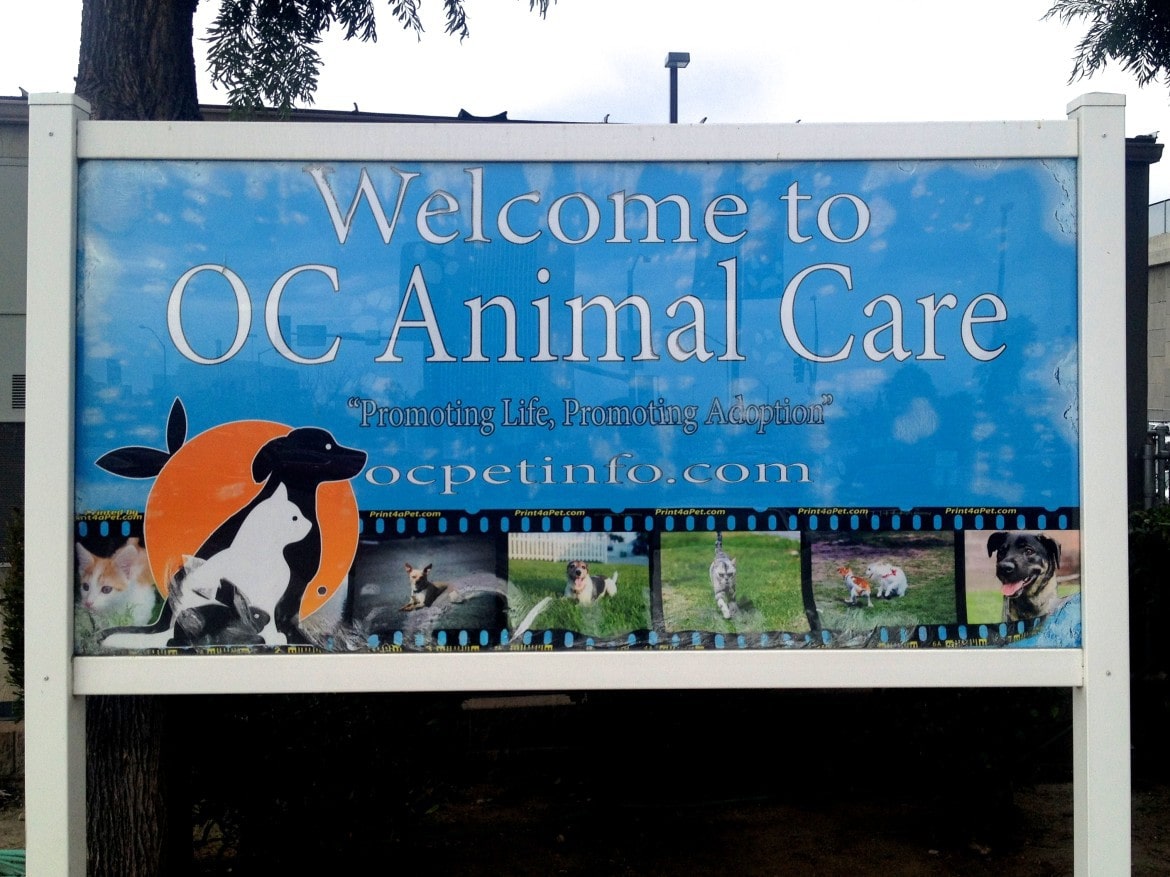 Animal advocates turned out to Tuesday’s Orange County Board of Supervisors meeting to allege that top animal shelter executives have been lying about the rate at which they euthanize animals – claims that were met with silence from shelter officials.

After protesting on a street corner with signs showing faces of dogs they say were wrongfully killed, advocates – including a city councilman – leveled accusations from the speaker’s podium while also urging officials to ramp up adoption efforts and cut down on the killings of dogs, cats, and other shelter animals.

The advocates’ key bone of contention is the shelter’s so-called “kill rate,” which is the percentage of animals at the shelter that are euthanized. They say shelter managers include animals that arrive dead in their total animal intake figures so they can increase the number of reported admissions, which in turn makes the kill rate appear to be lower than it actually is.

“The data you’re working on is false data,” Lake Forest Councilman Jim Gardner told supervisors, who are ultimately responsible for the county government’s sole animal shelter in Orange. “How can you do your job, when they’re giving you bad data?”

In response to previous criticism from advocates, the county’s animal services director, Dr. Jennifer Hawkins, publicly told supervisors in September that the county’s kill rates were down to less than 6 percent that year.

But it’s actually been a far higher rate of around 35 percent, according to data later provided by the county in response to a legal settlement with animal rescuer Sharon Logan.

There was no response from county staff to the claims. Hawkins was watching the comments in the audience, but did not respond. Her spokeswoman didn’t have further comment when asked about the claims after the meeting.

The following day, Hawkins released a short statement saying her agency will be complying with a directive from county supervisors to respond to the claims by an unspecified date.

“OC Animal Care will provide responses to the Board of Supervisors as directed in the Board Comments on March 22nd,” Hawkins said.

In a memo to shelter staff a few days before Tuesday’s protest, Hawkin’s boss, OC Community Resources Director Steve Franks, cited figures showing a 7 percent kill rate for dogs and 55 percent for cats. Significant progress is being made, he added.

“This is the first time [OC Animal Care] has reported live release rates for dogs above 90 percent,” Franks wrote, adding that there’s a variety of efforts underway to improve the shelter and increase adoptions.

Those efforts, he said, include working with an outside best-practices consultant, adding staff, and seeking nonprofit groups to help fundraise and find homes for animals.

But the allegedly false kill rate information is among many things that have eroded trust between animal rescuers and shelter officials, advocates said.

“How can you ask us to trust you when you refuse to take responsibility – and lie to us?” asked Rose Tingle, a South County-based animal advocate.

Tingle also noted county officials have acknowledged that when they euthanized an entire litter of kittens at once, they would only count it as one death, which made the euthanasia numbers seem smaller. That practice was corrected after Voice of OC asked about it in early December.

“We want transparency. We can’t trust your statistics,” Tingle said.

Other advocates alleged that harmless and healthy dogs were being killed for the wrong reasons, like not being social enough.

“When will the mislabeling and killing stop?” asked Danielle Parker, a founder of the Save More Kill Less OC Animal Care Protest Group.

The comments frustrated Supervisor Todd Spitzer, who said he was “bummed out” because an adoption event he hosted this weekend found homes for 52 animals and “literally cleared out the shelter” of all but two or three animals.

Given that there’s a group of people who “sing a collective chorus” of criticism, he said, “I think that needs a response…People will ask me questions, and I don’t know the answer.”

Spitzer asked county CEO Frank Kim to work with Hawkins and Franks to summarize the allegations and provide responses.

“Please give us some information, because those allegations just out there without a response – they’re really hurtful,” Spitzer said, adding that he hasn’t observed what the advocates were alleging.

Meanwhile, a union representative for shelter workers said the staffers continue to provide great service and serve a “valuable public safety function” – such as referring over 70 animal-related criminal cases to the district attorney’s office – despite the circumstances.

“We want you to continue to bring the employees along, because there is a lot of untapped expertise” that could help all stakeholders in this situation, Tim Steed of the Orange County Employees Association told supervisors.

The protest comes at a particularly sensitive time for the county, with at least three cities – Lake Forest, Rancho Santa Margarita, and Laguna Hills – weighing whether to exit the county system by a deadline next month.

Advocates said they’ve provided Hawkins with info about shelter systems in Austin and San Diego, which are both “no-kill” systems and considered among the most innovative in the country.

“Better sheltering is possible, and already exists,” said Miriam Penna Cathorall, adding that Austin cited its no-kill policy as one of the key reasons for its over-90 percent adoption rate.

Advocates made it clear they won’t be letting up in their pressure to reform the shelter’s practices. “We demand change, and we are not going anywhere,” said Summer Parker of the Save More Kill Less group.

Update: This story has been updated to include Dr. Jennifer Hawkins’ statement Wednesday.