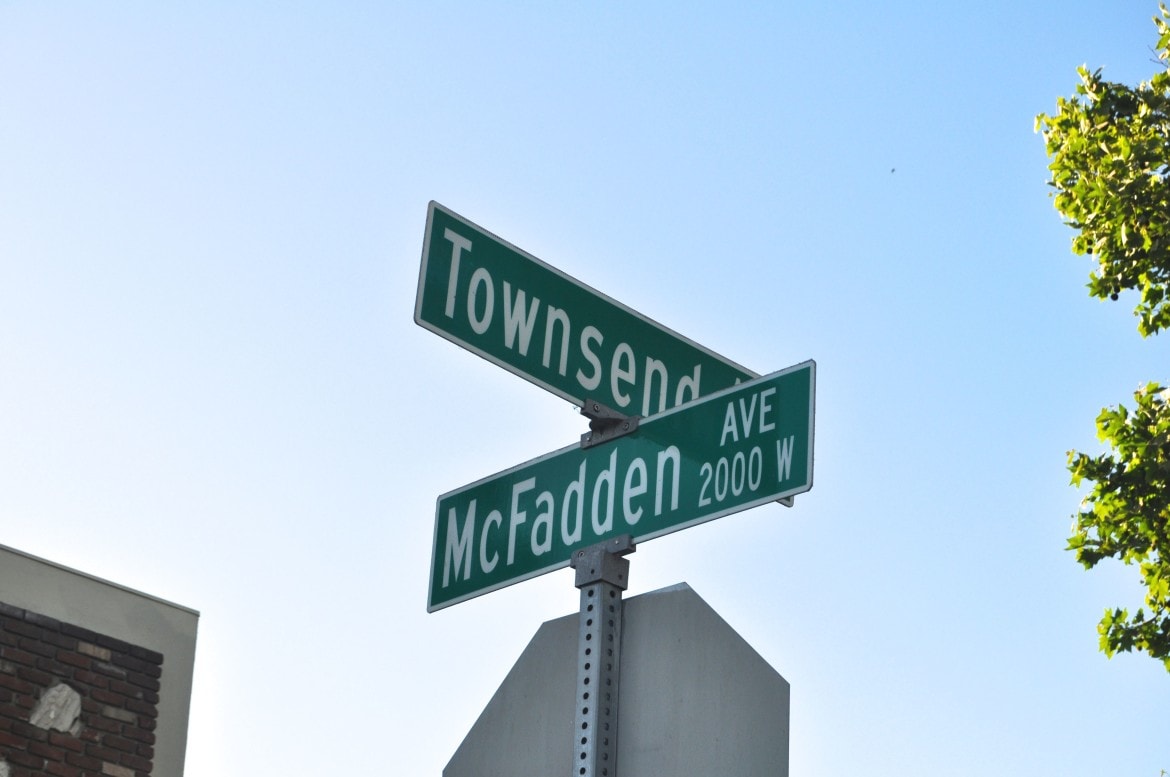 A street sign in Santa Ana's Townsend neighborhood, where residents are fighting a gang injunction.

When touting the controversial gang injunction in Santa Ana’s Townsend Street neighborhood, law enforcement officials have said that while the approach may seem heavy-handed to residents, in the end it makes them safer.

But a Voice of OC analysis of one significant indicator of neighborhood safety — the number of reported shootings — shows the injunction has had no discernible effect.

There were 64 calls to police regarding shootings within the Townsend boundaries in the roughly year and a half before the injunction was instituted in August of 2014; and 65 shootings in the same number of months since, according to the analysis of department data.

Critics of the injunction say the numbers, which include reported shootings through the middle of February, provide evidence for what they’ve been saying all along – that gang injunctions have no measurable impact on increasing neighborhood safety.

James Spady — an associate professor of American history at Soka University and a gang injunctions researcher – said the data confirms that “injunctions are utterly unproven as effective techniques for reducing violence,” and are therefore a “dangerous, aggressive experiment in public policy.”

However, Santa Ana Police Chief Carlos Rojas says the data isn’t that clear because police calls for service is an unreliable indicator. A more accurate measurement of whether the injunction works is to determine whether the people targeted by the injunction – Rojas says only 24 of the “worst of the worst” gang members are covered – are still in the area committing crime.

Rojas said he didn’t know off hand what’s happened with those gang members.

A gang injunction is a civil order that restricts illegal and otherwise legal, everyday activities of the gang’s members in what prosecutors describe as a “safety zone.” Those enjoined are prohibited, for example, from associating with gang members in public spaces within that safety zone, or from acting as lookouts, or intimidating anyone in public.

Residents of Townsend Street are legally challenging the injunction, which was approved by an Orange County Superior Court judge last year in a default judgment. It is the second Santa Ana injunction to be approved by the courts, and some residents have expressed concerns that more injunctions are to come.

Many neighborhood residents and activists say the injunctions go beyond simply targeting gang members and in effect criminalize the normal, everyday behavior of all residents in the so-called safety zone

Meanwhile, law enforcement officials have pointed to studies that show gang injunctions reduce violent crimes in neighborhoods. District Attorney Tony Rackauckas during his swearing in ceremony last year said violent crimes in the county’s injunction zones “fell by up to 65 percent after the injunctions were put in place.”

Spady said statements like these “cherry-pick” studies that work in favor of injunctions. A broader look at injunctions show that in some zones violence goes up, while in others it goes down, Spady said. In other words, the jury is still out on whether injunctions work, and for now the answer is “completely inconclusive,” he said.

Consider a 2009 RAND Corporation study of the 2006 gang injunction in the city’s Santa Nita neighborhood that found while property crimes decreased, violent crimes spiked by up to 40 percent following the injunction.

Yet, despite such studies, Spady sides with Rojas in cautioning against making broad conclusions from calls for services data. The problem is it’s unclear how many of the calls were false reports, like a resident mistaking a firework for a gunshot. Another problem is there are sometimes two or three calls for the same incident, making the data redundant at some points. And it’s unclear how many were gang related, Rojas said.

While the debate continues over whether gang injunctions work, they definitely create an atmosphere of police intimidation, with residents feeling that officers are coming down too hard on them, Spady said.

“The injunction absolutely accomplishes that. I don’t know if that’s a very good thing,” he said.

A notable aspect of data obtained by Voice of OC is it indicates that the injunction zone was not impacted by the recent spike in shootings citywide.

In January, there were 41 shootings throughout Santa Ana, a 71-percent increase from the 24 shootings in January of 2015, the Orange County Register reported. Of the shootings this January, only two were in Townsend.

But, as Medina points out, it’s often the enforcement leg of the stool that receives the bulk of the funding, while the other two legs have little to stand on. And it can’t be said that city leaders are seriously approaching the issue until the city invests more in prevention, he said.

“What [police are] really saying to the community is we’re not taking what’s going on seriously,” Medina said.

Medina said a more serious effort would involve a citywide initiative that has the kinds of resources that are being allocated towards hiring more police officers – Rojas says 25 recruits are in training now – and studying the community infrastructure needs of each neighborhood.

The places most in need of help would receive it in the form of daycare and recreational centers, after-school programs, or whatever the study finds is most needed in that neighborhood.

Rojas acknowledges gang injunctions aren’t a “silver bullet” and that there are larger social problems at work. He said he expects other groups like nonprofits to do their part in reducing crime in the area.

It can’t all be up to the police department, Rojas said.

“I think you have to take a balanced approach. Of course you want to get at the root cause. It’s not just a police problem. It’s a societal issue that’s taken place in these areas,” Rojas said. “We’re not the only solution even though often times we’re the focus. Some people feel that, hey, whatever we do is supposed to bring the ultimate solution.”