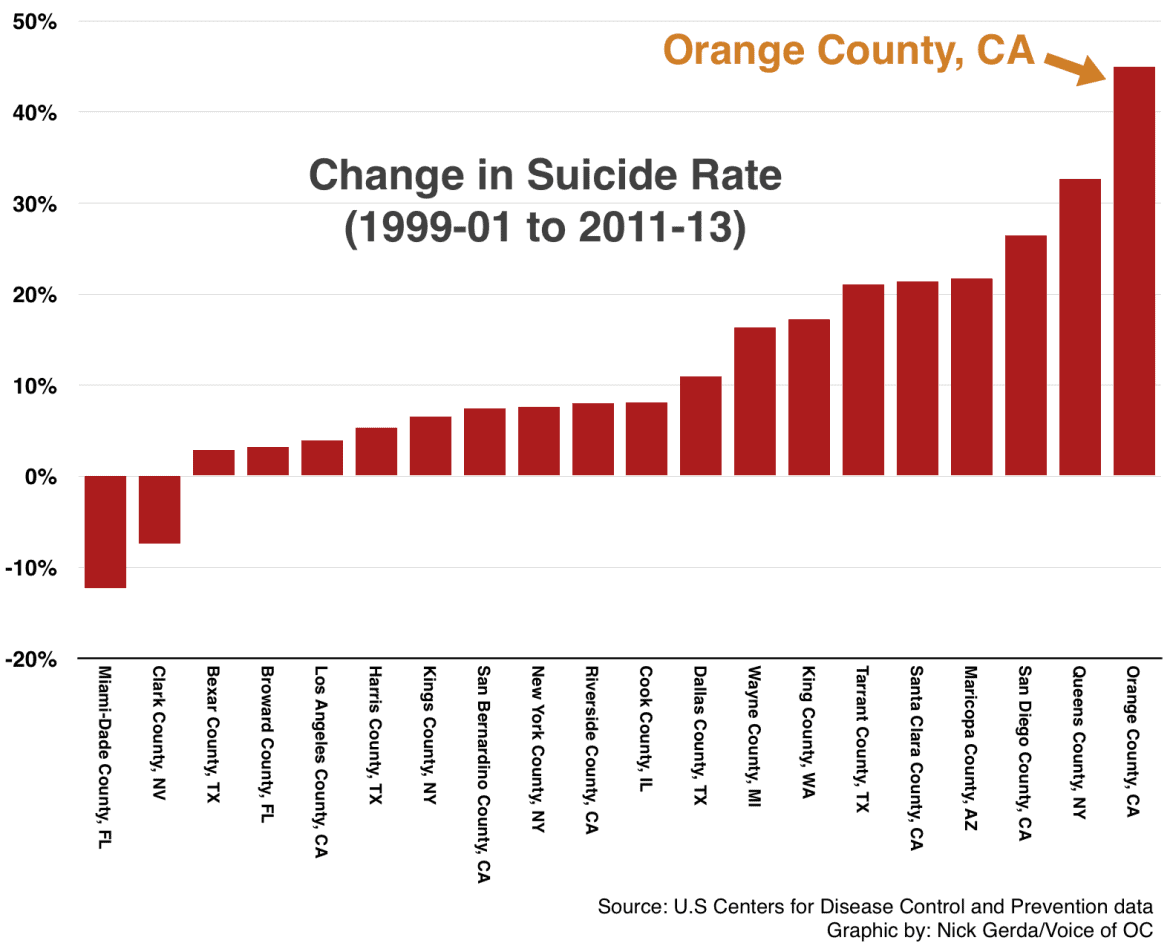 Historically, locales with gloomy weather, like rainy Seattle, are often thought of as places where people are the most vulnerable to suicide.

But since the late 1990s, sunny Orange County has had the largest suicide-rate increase among the nation’s 20 most-populous counties, according to a Voice of OC analysis of federal suicide data.

The county’s per-capita rate of suicide jumped 45 percent between the three-year periods of 1999 to 2001 and 2011 to 2013, according to the analysis. This compares to an average increase of 22 percent nationwide during the same time frame. 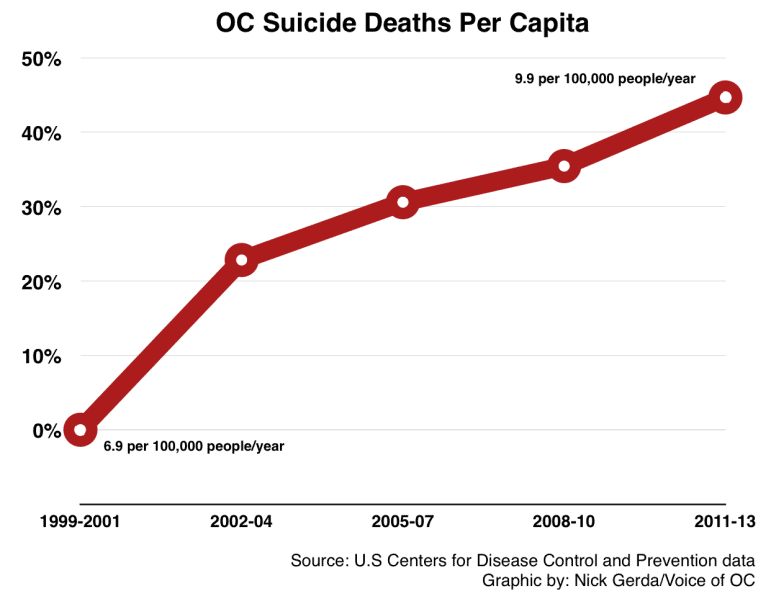 County officials were taken aback when presented with these figures. The Board of Supervisors, which oversees Orange County’s vast and complicated mental health system, hasn’t had an in-depth discussion about suicide trends and prevention efforts for at least several years.

But supervisors’ Chairwoman Lisa Bartlett, who also co-chairs a supervisors’ committee on mental health, said Voice of OC’s findings are “very disconcerting” and worthy of a potential discussion by the board, with the involvement of county Health Care Agency staff.

“Every suicide is certainly a terrible tragedy. We’re doing everything we can at the county with regard to the behavioral health policies and programs,” Bartlett said.

She noted that last week she and Supervisor Andrew Do directed staff to start the process of adding more crisis stabilization beds for people going through mental health emergencies, which a county grand jury called out last year as being in severely short-supply.

Meanwhile, mental health experts note that suicides is a complex issue that can be caused by a variety of factors, such as untreated mental illness, depression, substance use, and sudden loss.

As for the increase in suicides locally, they say it has some similarities to nationwide trends. Specifically, researchers pointed to increases in drug overdoses, particularly prescription drugs, and rising suicide rates among working and middle-age white men.

The Orange County data shows self-poisoning increased at a higher rate than any other method of suicide, accounting for more than half of the jump in overall deaths. And the suicide rate for white men age 25 to 64, which was already much higher than other groups, increased by over 70 percent.

Research is showing that white males with lower education and socioeconomic status are “far more vulnerable” to suicide, said Mark Kaplan, a social welfare professor at UCLA who’s working on a study for the National Institutes of Health on the impact of the economic recession on suicides.

And research has shown a correlation between economic declines and increases in suicides among working-age adults.

The highest national suicide rates ever recorded were in the 1930s during the Great Depression, and a 2007 CDC study found a consistent pattern of suicides among working-age adults rising during periods of economic decline and falling during economic booms.

Kaplan was struck by Orange County’s large increase in suicides by overdose – which grew by 140 percent – and said the increase might actually be higher, given that many overdose suicides are labeled as accidental.

“I think it’s in some way related to the epidemic of opioid use,” said Kaplan. “More and more of those drugs are being used and more and more are ending up in emergency departments or dying.”

He added: “This is just the tip of the iceberg that you’re looking at here, in terms of the larger problems.”

Suicides are one of the leading causes of death – both nationally and locally – and the second leading cause of death among teenagers and young adults. There are more than five times as many deaths from suicides as homicides in Orange County.

And deaths are just part of the picture. For each suicide death in Orange County, there are ten hospitalizations for attempted suicides or intentional self-injuries, according to the county.

In addition to intense emotional pain suffered by loved ones, those who survive an attempt, and community members, suicide attempts lead to $60 million in hospitalization costs each year in Orange County, according to a county report analyzing data from 2009 through 2011.

The county’s suicide rate fell steadily from the early 1970s through the late 1990s, but began to increase in the early 2000s and has risen sharply since then.

That’s 286 more lives lost than if the rate had remained stable, with suicides rising at the same rate as population growth.

The increase spared no major demographic group. Whites, Latinos, Asians, men, women, teenagers, adults, and seniors all saw increases in their suicide rates of between 18 percent and 70 percent.

Particularly impacted were whites, who experienced a 70-percent increase in suicide deaths per capita, on top of already having the highest suicide rate – by far – among the county’s largest races and ethnicities. Whites commit suicide in Orange County over five times as often as Latinos, when accounting for population size, and nearly three times as often as Asians. 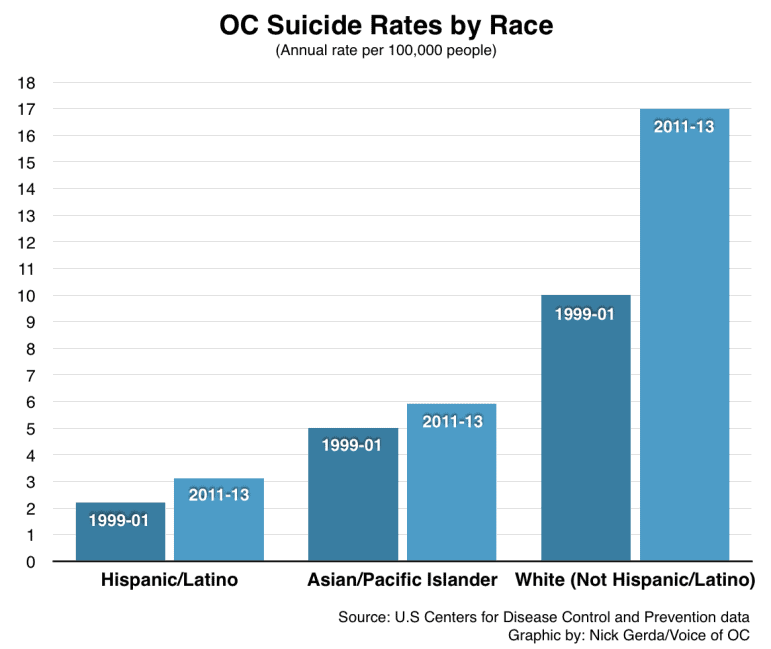 There are a variety of theories for why white men are more likely to die by suicide, including a lack of resilience or coping ability, more lethal choices in suicide method, and greater social isolation in times of depression and loss. It is the subject of much debate among researchers.

The revelations come amid a heightened focus lately on the county’s mental health system, with many health professionals and community members describing it as fragmented and missing key components.

One of the most significant gaps, they say, is a shortage of psychiatric beds, which the county grand jury highlighted in a report last year.

Calling it a “serious shortage,” the grand jury said the county should have about 1,500 psychiatric beds. But there were just 685 beds, they found – less than half the recommended level.

There’s been a 65-percent drop in psychiatric beds since the 1990s, while the county’s population has increased by 35 percent, he added.

“Instead, you’re putting [people with mental illness] in the emergency beds and in the prisons, at a much higher cost.”

The situation is even more dire for children. There were 32 psychiatric beds in Orange County for roughly 725,000 children. For children under 12, there will be no beds until a facility opens at Children’s Hospital of Orange County late next year.

County supervisors themselves have said they didn’t have a deeper grasp of the system’s programs until recently, with over 200 county mental health programs that, until a few weeks ago, weren’t described on a single list.

Holzmann and other advocates, however, have expressed hope that things will improve with the attention mental health is getting from Bartlett and Do.

Many of the county’s mental health staffers “are really committed to solutions, and in that respect I am very hopeful,” said Steve Pittman, president of the National Alliance on Mental Illness’ Orange County chapter.

“But I don’t yet think that we have the system that we want to have,” he added, noting that there’s still many barriers for family members who want to help loved ones affected by mental illness.

Experts say that while there are a wide range of factors that lead people to suicide, there are a variety of proven methods to reduce suicide deaths that health agencies can implement.

One approach involves training physical health professionals – such as primary care doctors and emergency room staff – on how to recognize signs of mental health issues that can lead to suicide and help refer patients to supportive treatment.

From there, successful treatments include things like family and community-based cognitive behavioral therapy, also known as CBT, in which a therapist tries to help the client develop specific strategies to address their issues.

Other strategies focus on helping people build stronger social connections with family and community members, such as mentors for youth who are at risk of suicide.

“Research has found that when you look at those people who have stronger social support or stronger network, they have lower suicide behavior…Those who are more socially isolated have higher risk,” said Dr. Alex Crosby, a medical epidemiologist at the CDC who studies suicide prevention.

“There have been some demonstrated programs that show that we can decrease the suicide rate if they’re done well.”

“I think we really need a multi-pronged approach, we need better treatments, we need to get the treatments [that] we know work out there,” and regularly follow up with people receiving treatment, Asarnow said.

One such suicide prevention effort was undertaken by the U.S. Air Force, which trained a wide variety of people to recognize warning signs for suicide, who then helped connect those at risk to help.

The suicide rate consistently dropped during the program, for a total reduction of 21 percent, according to a study in the American Journal of Public Health.

“When that was in place it did reduce their suicide rate,” said Dr. Doreen Marshall, vice president of programs at the American Foundation for Suicide Prevention.

“Raising everyone’s awareness for risk for suicide and what are risk factors for suicide, as well as providing [treatment] for individuals who are at risk, is an effective strategy.”

The experts also emphasized that anyone contemplating suicide, or people concerned about a loved one who may be considering suicide, can make a confidential and free call to the National Suicide Prevention Lifeline at 1-800-273-TALK.